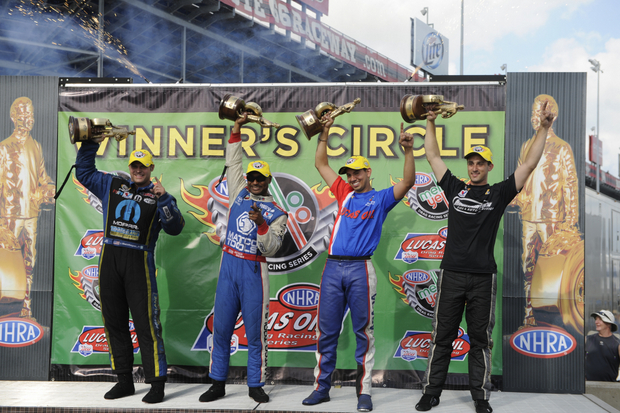 The O’Reilly Auto Parts Route 66 NHRA Nationals in nearby Chicago is the home track of NHRA multi-nitro car owner, Don Schumacher and his winning drag racing teams didn’t want to disappoint their boss in his own backyard.  To keep him smiling, Matt Hagan (Funny Car) and Antron Brown (Top Fuel) delivered with impressive wins on Sunday.

It was an NHRA father-son final first in Pro Stock Motorcyle and Vincent Nobile drove to his first Pro Stock title of the season.

As the NHRA Mello Yello tour hits its summer stride and crosses the half-way point of the season, the stress level and tension is mounting with only six races before the NHRA Countdown in September.

Matt Hagan had a lot on his mind entering Sunday’s eliminations. The Christiansburg, Va. resident is in a fight to stay in the top 10 in the Funny Car points standings.  The team, led by Dickie Venables, entered the Route 66 NHRA Nationals 10th in the standings and Hagan’s win moved the team up to eighth.

It wasn’t an easy route for the Mopar team, who struggled with six first-round losses in 12 NHRA Mello Yello events after opening the season by going to the championship round.

“It’s been a humbling year for us,” Matt said.  “Last year we came out and won five races and you think that you’re going to set the world on fire the following year.  We just kind of fell off.  These guys have been keeping after it.”

The Mopar team started the day against Don Schumacher Racing teammate Jack Beckman before racing Bob Bode in the second round, DSR teammate Ron Capps in the semifinal and DSR teammate Tommy Johnson Jr. in the final round.

Matt became the first DSR driver to defeat three teammates en route to an event title, the 11th of his career.

“We’re getting there but we still have a long way to go,” said Hagan.  “The competition out here is so, so tough in Funny Car.  It makes you realize how special these trophies are.  You have 10 guys out there working extremely hard for one common goal and it comes together, that’s just something you don’t want to see end.”

Johnson Jr. was appearing in his second final of the season following his victory in Bristol.  The Make-A-Wish Dodge Charger team, the No. 1 qualifier with a pass of 3.999 seconds, rose to second in the point standings and trails Robert Hight by 246 points.  Hight reached the second round before falling to Capps.

Antron Brown, who qualified the Matco rail in the No. 3 spot under the lights at the Route 66 Nationals on Saturday evening, tamed the tricky strip located in the Chicagoland suburbs behind the wheel of his Top Fuel dragster tuned by crew chiefs Brian Corradi and Mark Oswald.

“That was great to put a 3.81 out there in the final.  Mark and Brian said we can run a low .80 and they were right.  That’s special when your crew chiefs say that and the car goes out and does it.”

Brown, who began racing professionally in 1998, raced to his category-best fourth win of the season by defeating part-time runner Billy Torrence, Australian rookie Richie Crampton, veteran Clay Millican and popular second generation racer Brittany Force in the final round.  The semifinal win over Millican was the 500th round win of Brown’s decorated multi-category career.  He now stands at 501 with 279 rounds coming in Top Fuel.

One year ago at Joliet, Brown’s DSR teammates Tony Schumacher and Matt Hagan earned the double-up wins for “The Shoe” at his home track.  Brown and Hagan made that double-up No. 40 for the only team in NHRA history to earn wins in all four professional classes.  DSR now has won 230 event titles.

“To send Don home with two more Wally trophies is a special feeling,” said Hagan, now a three-time Chicago winner.  “It’s always good to get some brownie points in front of the bossman’s friends and family.”

Brown’s opponent in the final round, Brittany Force had lane choice over him and she knew he would be tough competitor.  Brittany stayed focused, went through her routine and did her job as a driver as she had a great reaction time.  Unfortunately, so did Antron, as Brittany’s .063 light verses Antron’s .064 wasn’t enough to hold off his 3.814 second run to her 3.850 pass.

“Honestly, I don’t even know what happened on that last run, everything went by so fast, we didn’t have time to warm up.  I got ready in the pits, and we pulled up there and I thought; okay, I’ll have a moment to get in and take a deep breath, and there were funny cars going down the track, and we were the next pair, so I jumped in, suited up and didn¹t have time to think about anything, so before I knew it, the tree was coming down and we were heading down there,” said the finalist Force, her second of the year.

A little bit of drag racing history was made Sunday evening at Route 66 Raceway when Hector Arana Jr. beat his father Hector Arana Sr. in the Pro Stock Motorcycle finale.  It was the first time in class history that a father/son duo lined up with the trophy on the line.

“It really didn’t matter who won because either way we were bringing a Wally (trophy) home to Indiana,” said Arana Jr., a 25-year-old, fourth-year pro.  “We’ve been talking about getting to the final together since I started racing and we finally got it done, which is really cool, but to be honest I would have much rather beaten one of the other riders.  It would feel a lot better than it does beating my dad.”

Arana Jr. tasted victory at last year’s Sonoma (Calif.) race while his father hasn’t won since the Dallas event in 2009.  Both men ride identically-prepared Lucas Oil Buells, although at this race Arana Jr.’s bike was slightly quicker than his 55-year-old father’s mount.

“A big part of me wanted dad to win that race, believe me,” Arana Jr. said.  “I know it’s been a while since he’s won and he wanted it bad, but we don’t play any favorites on this team.  We don’t give away races.  We go up there and race straight up every time.”

The victory was the eighth of Arana Jr.’s career.  His father has six wins, including the five he earned in his championship season of 2009.

“I knew he was right there,” Arana Jr. said. “I could hear his bike and sense that it was right next to me.  I had to just concentrate on hitting my shift points and making the best run possible.  I think it wasn’t more than a foot or so at the top end.”

“It’s kind of a long time coming,” Nobile said of his winless streak.  “I know I’m young and I’ve won some races but when you go a streak like I’ve done and not won one, you kind of forget what it feels like.  I owe it all to my team.  They gave me a great car.”

It was the ninth win of Nobile’s career and first of the season.  Nobile advanced to the final with round wins over Jonathan Gray, reigning world champ Jeg Coughlin and Shane Tucker before his victory against Line.

“As a team we won,” Nobile said of his final round win over his teammate.  “That was the ultimate goal.  We want to have two of our cars in the final round of every race.”

Line had nothing to hang his head about as he left the starting line, clocking a .031 start and then following up with the quicker pass of the two, a 6.637 run, 209.26 mph. Unfortunately for Line, Nobile was nearly psychic at the starting line, launching in just .004-second to score a holeshot win over his engine builder in the form of a 6.655 pass, at 208.01 mph.

“We just came up a little short against Vincent.  I just wasn’t quite good enough,” said Line.  “It’s a little bit hard to race your teammate sometimes.  Someone is going to win and someone is going to lose, but in the end I feel like Summit Racing won today.  It was a good day.”

Line, was appearing in his second final of the season following his win at the opening event in Pomona.  He currently sits fourth with 830 points.  Points leader Erica Enders-Stevens’ (1,036) day ended on a holeshot to Elite Motorsports teammate, Shane Tucker and still holds a 190 point lead over Jeg Coughlin and 191 over Allen Johnson, respectively.  Nobile’s win on Sunday moved him up to fifth in the standings.  Greg Anderson is still 25 points out of the top 10 despite a first round loss to Dave Connolly.

Coming up next is the completion of four in a row for the running of the Summit Equipment Nationals at the Summit Motorsports Park in Norwalk, Ohio on July 3 – 6, the home of world famous pound of ice cream for a dollar.