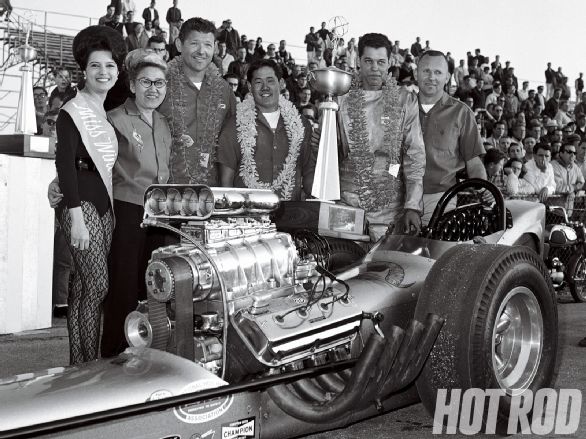 It’s hard to imagine that 2015 marks the 50th anniversary of one the NHRA’s biggest names taking his first win. In all the legendary races that Don “The Snake” Prudhomme has won in his storied career, none stand out more than that first win ever at the 1965 Winternationals at Pomona Raceway. Prudhomme drove Roland Leong’s renowned Hawaiian Top Fuel dragster in one of the largest one-day events ever staged by the National Hot Rod Association. Front engine dragsters dominated and a throng of history-making drivers were ready to battle that day.

The NHRA was celebrating its 14th season of competition with the Top Fuel burners taking point as the premier hot rod division thanks to an infusion of nitro methane. With crew chiefs harnessing this high-powered fuel, these vigorous front-end dragster were elevating their speeds to over 200MPH. These cars were reeling out quarter-mile elapsed times in the seven-second bracket. It was unknown territory, and the fight for first was going to be tight.

For 23-year old Prudhomme,  the  list of competitors for the ’65 event was a future list of drag racing hall-of-famers: “Big Daddy” Don Garlits, later rival Tom “The Mongoose” McEwen, Bill Alexander, James Warren driving the Warren, Coburn and Miller car, Connie ‘The Bounty Hunter” Kalitta and Danny “On the Gas” Ongais, just to name a few.

Prudhomme had been successfully racing Tommy Greer’s Greer-Black-Prudhomme dragster, but Tommy Greer was getting ready to hang it up. Snake and Roland Leong had struck up a good friendship while he was building the Hawaiian, and when Leong was looking for a new driver for the Hawaiian, Prudhomme had a proven track record.

“I didn’t have any thoughts or ideas while the car was being built that I’d end up driving it,” said Prudhomme. “I know we went to Lions Dragstrip and Roland ran there and crashed it on the first run. From then on, it all worked out like ‘Hey, they told Roland  I’m going to quit running this car and you ought to put Prudhomme in it.’ Honestly, I think Keith (Black) didn’t want Roland to drive the thing because he could get hurt. That’s how that relationship got started.”
The Hawaiian was ready to go, but weather intervened. The event was a one day show, and fog enveloped the Pomona area on Friday. A day of rain on Saturday caused NHRA officials to question if the event could be run at all that weekend. Sunday was going to be the last chance. 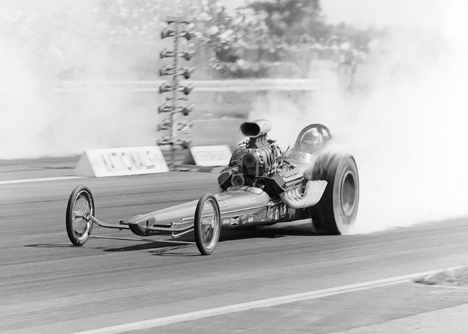 NHRA race director Jack Hart had the daunting task of compressing class eliminations, qualifying, and the seven eliminator categories into a 10-hour window with the promise of a Sunday forecast leaning towards clearing skies. Because of anticipated traffic jams around the Los Angeles County Fairgrounds,  NHRA officials convinced local law-enforcement to open the gates at midnight. Many of the choice seats were filled by 4 a.m., and 65,000 fans were in the stands when Division 2 Director, and NHRA Chief Starter, Buster Couch signaled the cars to begin their runs at 7 a.m.

In qualifying, Prudhomme blazed through the fog-filled arena with a pace-setting sprint of 7.80 seconds and claimed he was stroking it as he coasted through at 204.54 mph. Garlits was close on his heels, qualifying No. 2 with his run of 7.81 seconds along with a blasting speed of 206.88 mph. In the opening round, under the TV eyes of “ABC Wide World of Sports”, Prudhomme defeated Willie Redford, James Warren in the second, had a bye run in the quarterfinals, and then defeated now former NHRA official starter Rick Stewart in the semi-finals before squaring off with Bill Alexander in the finals. In his final pass, Snake ran an unprecedented  elapsed time of 7.76 seconds at a winning speed of 201.34 mph using his Keith Black horsepower.

“When it came down to the finals, our engine blew a freeze plug and it starting spraying oil on me going through the lights,” said Prudhomme. “I was relieved that we won. I kept my foot in it and it was one of those kinds of moments, you just hold on when maybe you should have lifted.” The victory will go down in history as one of the greatest displays of horsepower and consistency ever seen in the burgeoning sport and it was the first of his 49-recorded NHRA legendary victories. From qualifying earlier in the day in taking the pole to eventually winning the race still made for an exhausting day and he will tell you that his recollection of the race is sketchy at best.

“When you’re young like that, it didn’t seem long at all”, recalled Prudhomme of the event filled day. “That’s the thing about youth, you don’t even think about things like that. You’re full of energy and not thinking about a long day. From the first round to the last, I never thought of that day being that long. There was always something going on in the Hawaiian pits. It was just a first-class engine, a first-class car and overall, one of the best pieces of equipment there. It was a very competitive car.”
One of Prudhomme’s  fondest memories of the day was the victory lane ceremonies. “To go rolling into victory lane was really something,” said Prudhomme. “Dick Wells, a longtime NHRA fella, was our PR man. Roland’s mom had hired him as our press agent when back then hardly anyone had that kind of thing. He got the trophy area all ready getting the car position just right. The big surprise for me was already having a winner’s cap embroidered with my name on it. Lo and behold, Roland’s mom is putting Hawaiian leis on all of us. I really think that race launched Roland’s and mine career. That race, that car and it became an unbelievable time. It was a thrilling moment.”
When the day was done, NHRA race director, Jack Hart had accomplished his goal of running the entire race in one day, making 3,168 runs for 612 cars.
It was a thrilling day for fans and participants, and it launched a true legend in just a matter of hours