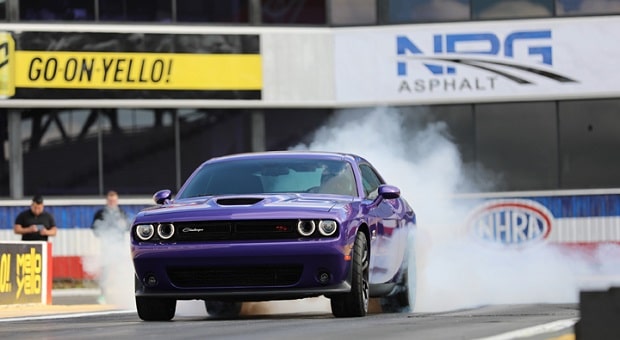 Now arriving in FCA dealerships after first being announced prior to the 2018 NHRA Dodge Mile-High Nationals at Bandimere Speedway near Denver last July, this street-legal yet drag-racing oriented NHRA-approved Dodge Challenger coupe is available for competition modifications this year. As produced for retail sale, the 2019 Dodge Challenger R/T Scat Pack 1320 uses the 392 HEMI V-8 engine, producing 485 horsepower and 475 lb-ft of torque.

To qualify for use in Stock and Super Stock NHRA categories, the vehicle will feature a class weight break of 8.72 and carry a minimum weight of 3,400 pounds. In Stock Eliminator, the Challenger R/T Scat Pack 1320 fits directly into the “B” Stock class, with competitors able to move up and down to run in the “A” or “C” Stock classes.

This Challenger can also run in the SS/FA class in Super Stock and is eligible for other specific classifications, including SS/EA or SS/GA. By adjusting NHRA minimum vehicle weight, grassroots NHRA Sportsman racers will have more flexibility and opportunities to compete and win in a variety of Stock and Super Stock categories.

”With the new 2019 Dodge Challenger R/T Scat Pack 1320 hitting showrooms, we know it’s just a short time before the ‘Angry Bee’ is buzzing the quarter-mile in NHRA and NMCA competition,” said Steve Beahm, head of passenger car brands – Dodge, SRT, Chrysler and FIAT, FCA – North America. “The 1320 brings the drag racing technology we launched on the limited-production Demon and pairs it with the proven 392 HEMI engine to create a blank canvas for the serious grassroots drag racer who may have one car that needs to do double duty – both at the drag strip and on the street.”

The Dodge Challenger R/T Scat Pack 1320 is also approved to race without modification in National Muscle Car Association (NMCA) events, making it a true street/strip vehicle. NMCA features both heads-up and bracket racing, one of the most popular forms of drag racing. Owners of this special car receive complimentary one-year membership in both NMCA and NHRA.

About Anne Proffit 732 Articles
Anne Proffit traces her love of racing - in particular drag racing - to her childhood days in Philadelphia, where Atco Dragway, Englishtown and Maple Grove Raceway were destinations just made for her. As a diversion, she was the first editor of IMSA’s Arrow newsletter, and now writes about and photographs sports cars, Indy cars, Formula 1, MotoGP, NASCAR, Formula Drift, Red Bull Global Rallycross - in addition to her first love of NHRA drag racing. A specialty is a particular admiration for the people that build and tune drag racing engines.