This weekend’s drag racing action at Texas Motorplex led to unforeseen Countdown to the Championship victories for three of the most determined NHRA Mello Yello Drag Racing Series drivers. Although a younger Torrence family member is currently leading the points battle in the Top Fuel series, the patriarch of this family, Billy Torrence, won for the second time in the Countdown after defeating rookie Jordan Vandergriff for the second straight Torrence Racing victory at the AAA Texas NHRA Fall Nationals. And Billy Torrence wasn’t the only driver to make a major play for the championship battle. After a string of four 3.90-second runs, Matt Hagan and crew chief Dickie Venables boosted their bid for a late-season championship run in the Funny Car Series. Despite entering this weekend eighth in the Pro Stock Series points battle, Greg Anderson and his KB Racing team were a terror on the Christmas Tree, leaving behind all four opponents, including Jeg Coughlin Jr., in the final to collect his 94th win and a major boost in the point standings. 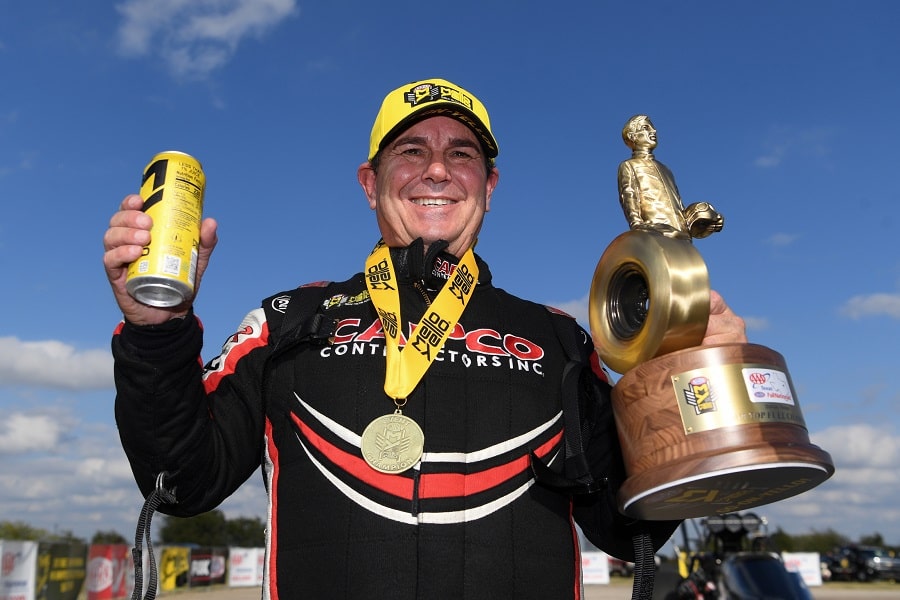 Although qualifying wasn’t the limit of Torrence and his Capco Contractors machine’s aspirations, Sunday’s final round at this weekend’s AAA Texas NHRA Fall Nationals gave the senior Torrence Racing driver a chance to drive back into his winning ways. With consistent runs through the first three rounds, including a 3.737-second run to defeat Terry McMillen in round one as well as a 3.767-second finish to defeat Shawn Reed, and even a 3.747-second run in the semifinals to defeat low qualifier Brittany Force, Torrence raced his way into Sunday’s final round against rookie Jordan Vandergriff.

After coming to the line in Sunday’s final round, Billy Torrence almost gave everything away after a late reaction time. Despite watching Jordan Vandergriff streak into the distance, Torrence stayed on the gas and caught the young rookie after Vandergriff smoked the tires to collect his second win of the Countdown – all while streaking into fourth place in the point standings going into the Dodge NHRA Nationals Presented By Pennzoil in Las Vegas.

“I am so excited to earn this win and have a chance at the Countdown to the Championship battle against my son,” said Torrence. “While I almost blew it after watching Vandergriff take off, I just told myself, ‘hold my beer and watch this,’ and after we caught him pretty quick; even though we didn’t have the best driver in the final, we had the best car.” 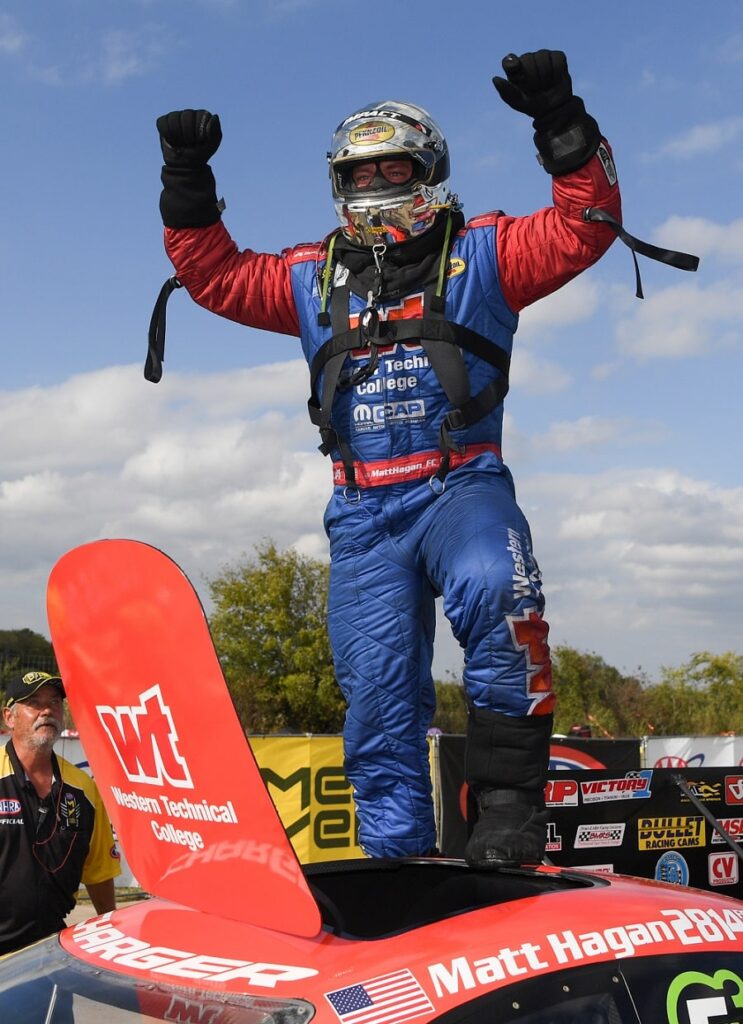 Torrence wouldn’t be the only driver to earn back to earn an unforeseen Countdown to the Championship win in Dallas. After putting together a string of four 3.90-second runs, separated by just nine-thousandths of a second, Don Schumacher Racing’s own Matt Hagan boosted his bid for a late-season championship run.

After running back-to-back 3.903-second passes in Sunday’s opening elimination rounds, Hagan took down Blake Alexander, J.R. Todd and even points leader Robert Hight to drive to a final against drag racing legend Bob Tasca III. Tasca (who scored two wins earlier this season in Bristol and Norwalk) and Hagan (who had a pair of wins in Phoenix and Epping); both boosted their championship chases by reaching Sunday’s final elimination round. While many were betting on Tasca for the final win, at the wheel of the Western Technical College Dodge Charger Hellcat Hagan’s final 3.909-second run would take down Bob Tasca III for his third win, matching his 2018 total.

“I was actually in a little deep in the final, but we had a great racecar and even better crew chief that made this win possible,” said Hagan. “It has been a long time since we earned a win like this and I really wanted to dig deep, rise to the occasion and drive my ass off.”

Just like Torrence, this win has earned Hagan a top-five position in the Countdown to the Championship points battle. 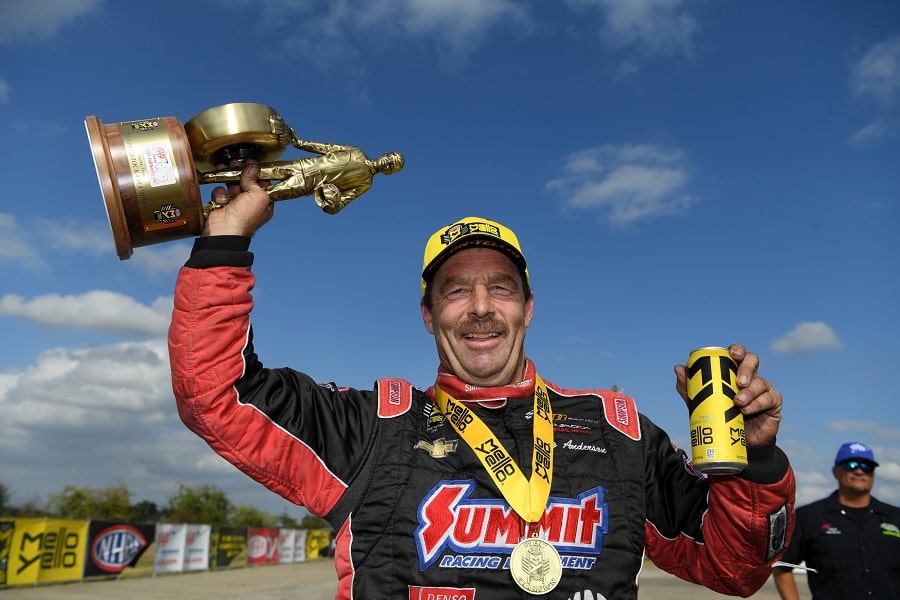 Much like Torrence and Hagan, another NHRA legend would make a rather serious charge in the Countdown to the Championship battle in the Pro Stock Series. KB Racing driver Greg Anderson entered this weekend in eighth place and knew he needed a good weekend at the AAA Texas FallNationals and a lot of determination to take down his first and semifinal rounds against teammate Jason Line and Deric Kramer on holeshot runs. Even besting points leader Erica Enders in round two, Anderson used his determination to both move on to Sunday’s final round and earn a determined victory there.

Thanks to his win, Anderson is now seventh in the points standings as he and his hard-working team race their way into Vegas.

“We have had so many titanic clashes that mean so much, and I knew it would be close and that I had to do a good job on the line, but it was total team effort,” said Anderson. “Sometimes the driver gets the job done, sometimes the car gets the job done and we had both this weekend, which is what it is going to take to get to the top of the Pro Stock Series ladder.”

Stay tuned to RacingJunk.com as the champions of the NHRA compete in the fifth race in the Countdown to the Championship at the Dodge NHRA Nationals at the Strip at Las Vegas Motor Speedway in Las Vegas, NC Oct. 31-Nov. 3, 2019.