The finish of the crash-filled non-points Sprint Unlimited race at Daytona International Speedway Saturday night saw Denny Hamlin take NASCAR’s first checkered flag of the 2016 season, holding off Joey Logano in an overtime finish.  Hamlin won after the yellow flag waved in the extra time-period, concluding the race under the new rules where he had to race to certain designated line before calling the race official.

As the leader, Hamlin took the green flag with six laps to go in the set distance, having to drive high and low blocking the line of quicker cars with three laps remaining when NASCAR called for another yellow flag due to oil on the track.

Then, as the green waved again with three to go, the yellow was unfurled once more after the cars of Carl Edwards and Brad Keselowski tangled going into turn three after Edwards made a move up the middle but not far enough up to clear Keselowski when he moved to the outside.  Other cars involved unable to avoid the melee were defending Sprint Cup champion, Kyle Busch, Aric Almirola, and Casey Mears, all ending up sidelined for the night.

Now with the new NASCAR overtime procedures in place, the green flag waved and on the start of the white flag lap chaos came about as the cars of Martin Truex, Jr. and Matt Kenseth collided, leaving no room for escape for Jamie McMurray, Brad Keselowski, Danica Patrick, and Greg Biffle, bringing out the yellow for the final time. 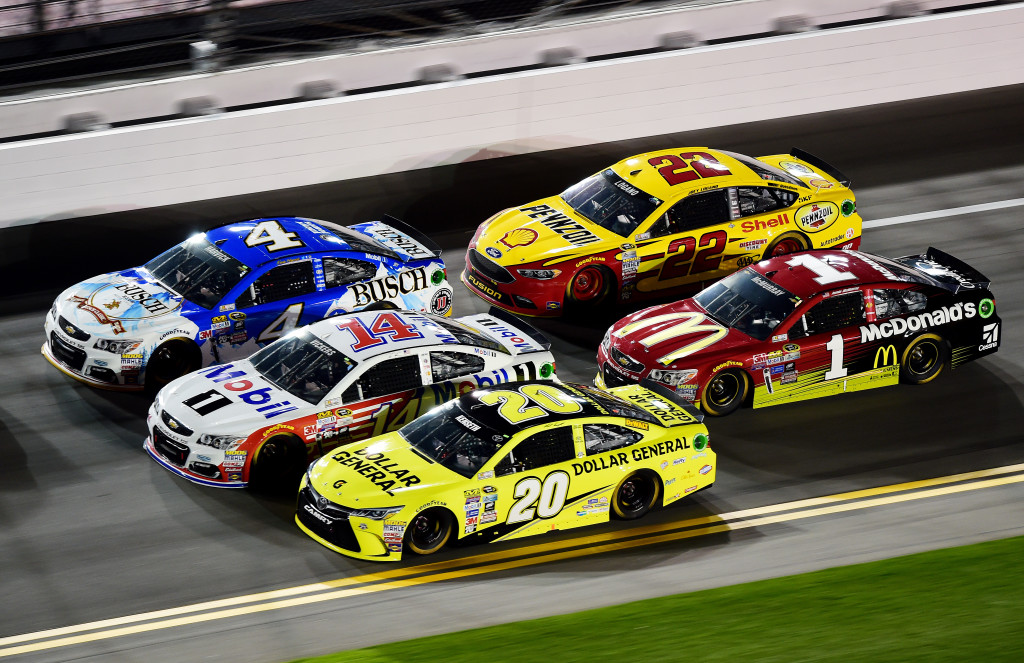 Hamlin was the first to cross the backstretch line, winning the Sprint Unlimited, followed by Logano and Menard in close quarters.  Kyle Larson was fourth with Casey Mears in fifth.

The Joe Gibbs Racing Fed-Ex Toyota team led by brand new crew chief, Mike Wheeler used a unique strategy of stretching their fuel mileage, pitting only once on lap 22, utilizing the array of future of caution flags (21 laps) to be able to conserve enough fuel to make the finish.  That thinking kept the JGR team as close to the lead pack for the rest of the race, having to survive numerous attempts on the lead.

“Well, it’s the best position to be in, but there were a lot of times where I just couldn’t hold off the cars that were coming,” Hamlin said.  “They came with a run that was so significant that I just had to pick, okay, I’m going to end up being side by side, so figure out whether I wanted to be on the top or the bottom, and a lot of that is a split-second decision based off of who’s behind them. 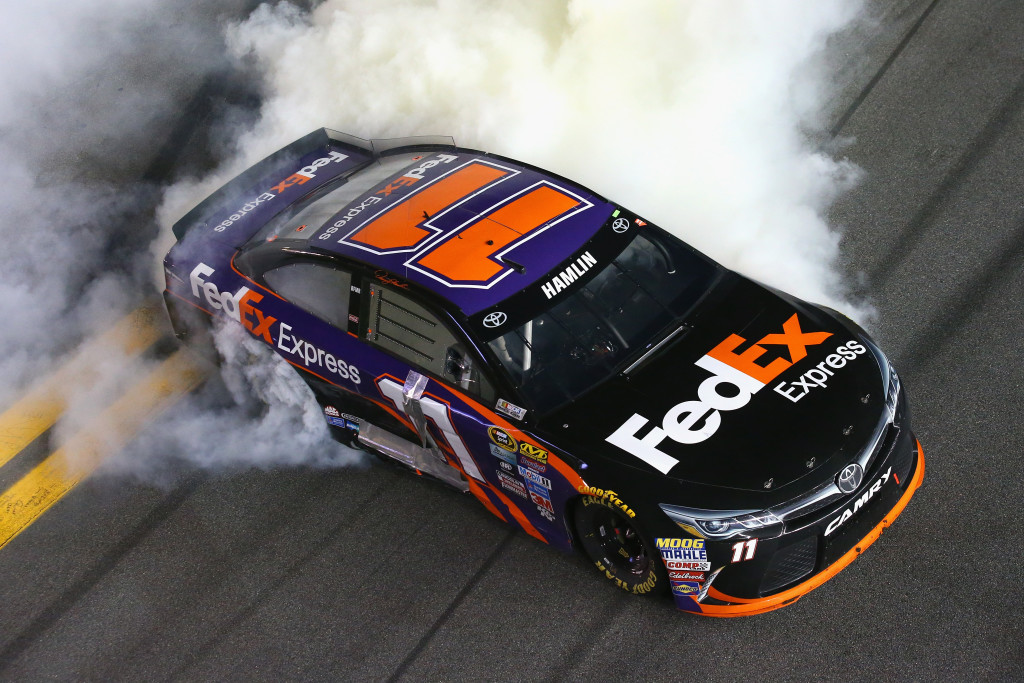 “I did damage control when guys did get up beside me and made sure that I put myself in the lane that I felt the most comfortable with the person behind me who was going to give me the shove.  A lot of it was Matt [Kenseth] most times and then Carl [Edwards] at the end, as well.  This win couldn’t be possible without my teammates.  Matt sacrificed so much, pushing me at the right time.  Total team effort.  Just like Kyle’s championship, we win as one.  This is a Joe Gibbs Racing win.”

The win gives JGR its third consecutive victory in the special race having won in four of the last five years with Hamlin earning three victories since he started in 2006.

Attrition was tremendous, seeing only eight cars finish the race out of a starting field of 25.  As the finish approached, it was literally ‘Bumper Cars’ at 200 mph with no one backing off, showing if you have momentum, you’re not giving it up. 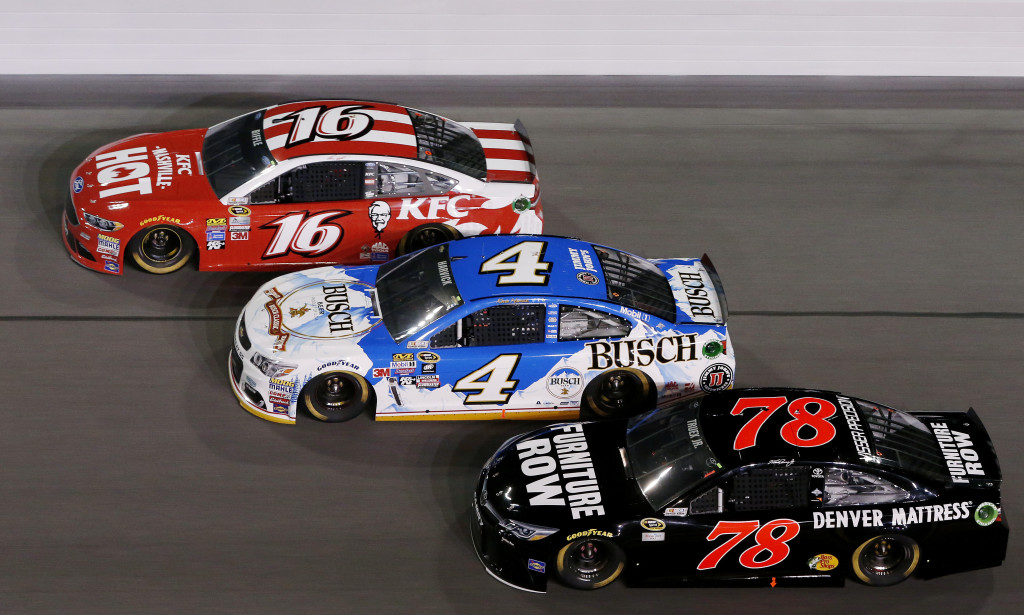 Runner-up finisher of the Sprint Unlimited and defending Daytona 500 champion, Joey Logano kept fresh tires and a full tank of fuel in his Ford, making repeated runs back to the front after his numerous stops in keeping his car in peak performance.

“It was close.  It was a lot of fun out there,” smiled Logano.  “We had a really good show.  We started last and worked our way up towards the front.  It was really quick the first part of the race, and we kept putting four tires on, which kind of set us back towards the middle and then worked our way back up and made one mistake and lost some spots and started getting back up there at the end, and for all — I’m proud of the speed we had.  We were close to almost winning it.  Obviously, like I said, we’re picking up where we left off from last year, so looking forward to the 500.” 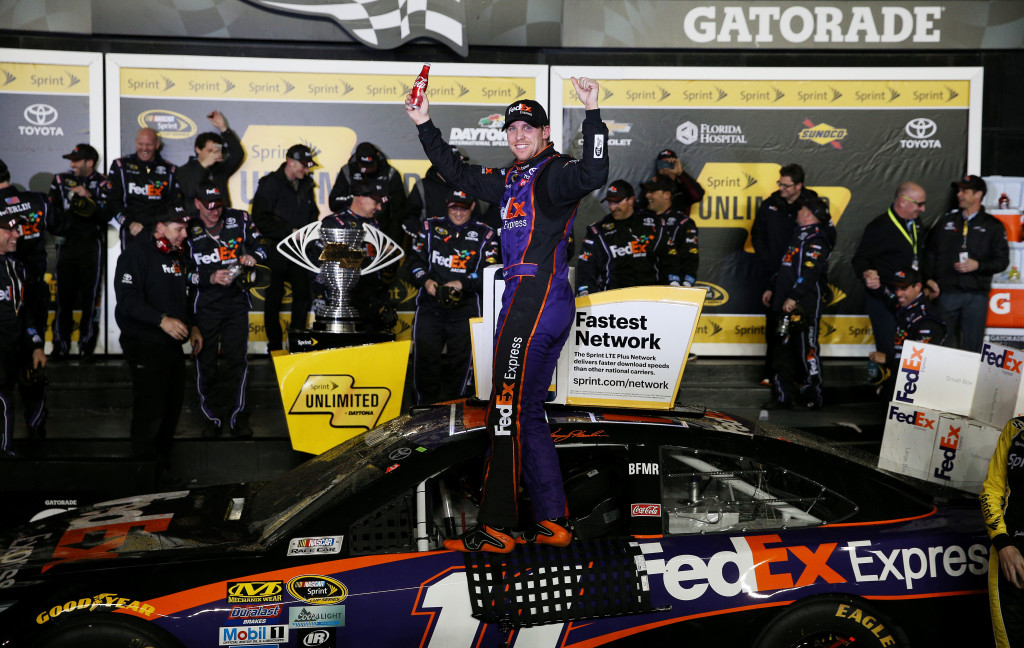 The average speed of the Sprint Unlimited was 128.432 mph slowed by seven caution flags for 25 laps.  There were 12 lead changes among three drivers with Hamlin dominating the 75-lap distance leading five times for 39 laps.