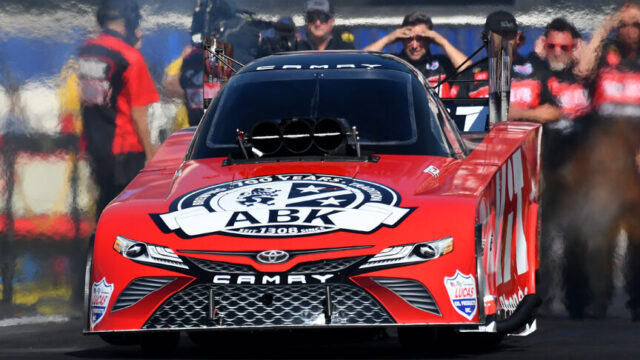 Two years away from the sport that was her calling, well, that was quite enough. After tending to family business in Austin, Texas, Alexis DeJoria had to come back to the love of her life: NHRA Camping World Drag Racing Series Funny Car competition.

She formed her own team to make that return in 2020, affiliating with former Top Fuel and Funny Car champion Del Worsham and with Nicky Boninfante, both of whom had worked with DeJoria when she was racing as a satellite team with Kalitta Motorsports. They acquired the necessary equipment, put together a well-oiled crew, performed testing that reinstated DeJoria’s license and went to Pomona to start the year.

It was at the 2020 season starter when DeJoria realized she was back home. The five-time Funny Car national event winner went to the semifinals in her return to racing and “That was a huge, huge highlight for me.” At the second race, held outside Phoenix on the track where DeJoria achieved her first Funny Car national victory in 2014, the glue came off and she was gone after the first round after a shaker of a run.

After that, it was sit-and-wait time as the coronavirus pandemic took hold of both the outside and drag racing worlds, putting everyone in a holding pattern. When NHRA elected to get back on-track at Lucas Oil Raceway outside Indianapolis, DeJoria and her team were ready, going to the quarterfinals in the first Indy race. After that it was first-round results through the U.S. Nationals, as the first four races all took place at the mid-country track. 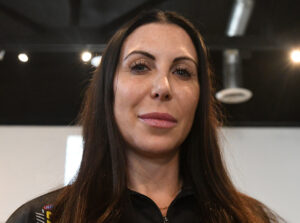 Once NHRA left Indianapolis, things became even more challenging for the driver. “The few mishaps that I had this year, the explosion in St. Louis and then the fire in Dallas,” she recalled, “definitely made me a better driver. Going through those experiences brings so much more to the table. Some drivers don’t ever experience those things… On the one hand, I am not happy it happened, but on the other hand I am grateful for the experience and to be able to walk away from it to race another day.”

Being detached from the sport of straight-line racing for two seasons helped DeJoria realize what she missed – even more than the on-track competition – was the team she’d worked with before stepping away. “It was like losing 12 people that are your friends and family all at once. I missed that and the camaraderie.”

She also missed the adrenaline boost that is nitro drag racing. “I missed those G forces. I missed going those speeds and driving my Toyota Camry Funny Car. I missed the competitiveness of the nitro Funny Car class.” While Alexis DeJoria wasn’t terribly nervous about getting back into her Funny Car and driving down the track, it was the little things, the warm-up, packing the parachute and the minutiae of each run: “As soon as that Funny Car stated up on the starting line, that was it for me. I have been racing for quite a while, so I felt good about getting back up on the horse again.”

And now, like everyone else, Alexis DeJoria has to deal with a long, long off-season that stretches from the first of November fo the middle of March. It’s almost like those two years off compressed into a few months. She admits her return to competition was hard on her body, has set up a little gym at her home and is going to focus more on her upper arm strength. “You forget how much it wears on you and how much strength you really need to handle these cars. I think I did a pretty good job this year, but I can always do better.”

To aid her physical conditioning, DeJoria intends to get out on her motorcycle while the weather cooperates and, once the weather turns, she’ll head to Colorado for some snowboarding, as well. “Snowboarding is a great workout in itself.”

DeJoria, who finished eighth in the 2020 Funny Car standings, also expects to work on her reaction times. “For the most part it has been really hard to get a good consistent rhythm going,” when hitting the tree just right. “You can have a great race car, but if you have sucky reaction times, you are not going to fare very well. That is going to be a big focus of mine,” during this long winter.

Alexis DeJoria will also be keeping in close touch with her crew chief, Worsham, who has been her mentor since she came to NHRA’s Funny Car class. “Del really stepped up and taught he everything I know about driving a race car. He was there all the time to bounce ideas off of, whether he was my crew chief, my teammate or a friend. He has a great history and he has been through it all. I am extremely grateful to be able to work with him and his family on this team. It is a dream come true.”