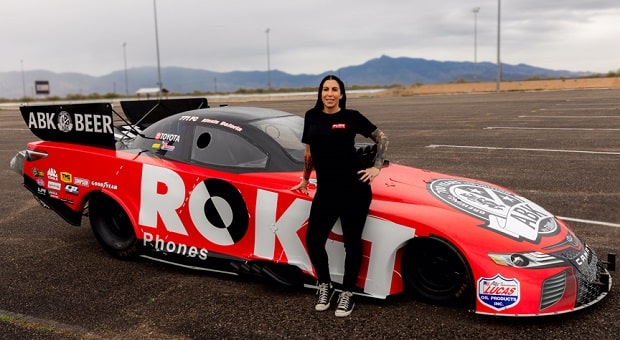 The return of Alexis DeJoria to NHRA Mello Yello Funny Car competition has fans and her competitors on edge as the five-time race winner revs up the flopper community with her indefatigable energy and will to win.

Since DeJoria announced her program last fall, there have been questions about her upcoming commercial partnerships, following a two-year absence from NHRA’s nitro pits. She continues to enjoy a manufacturing partnership with Toyota and will drive a Camry Funny Car.

Announced on Tuesday, Jan. 21 and shown during her test sessions outside Phoenix at Wild Horse Pass Motorsports Park, DeJoria has enlisted two partners to support her championship hopes. ROKit Phones and ABK Beer are partnering with DeJoria in a multi-year pact that will see her ROKit Toyota Camry Funny Car in red colors with black-and-white accents racing in all 24 NHRA national events from February through November.

ROKit are the creators of glasses-free 3D smartphones, while ABK Beer is a 700-year-old purveyor of Bavarian malt beverages. ROKit will deliver exclusive 3D content of DeJoria’s on-track activity via bespoke smartphones, while an ABK Beer truck intends to keep fans refreshed at the track as they watch her Del Worsham-tuned Camry hurtle down a 1,000-foot dragstrip.

“Joining Del Worsham’s newly-formed DC Motorsports team was just the first step in reigniting my quest at being the first female Funny Car world champion,” DeJoria said of her new alliances. “I’m thrilled that ROKit is coming along for the ride and I can’t wait to get back on the track. I’m energized and excited about all the things we have in store for the amazing NHRA fans.”

Before her departure two years ago, DeJoria’s pits were a magnet for fans and the driver was always seen milling at the ropes while her many supporters – young, old, male, female – all gravitated to DeJoria’s pits. Fans will have the opportunity to enjoy official merchandise from ROKit and ABK, whose branding appears on her race car, driver and crew uniforms, official merchandise and across the team’s transport fleet. 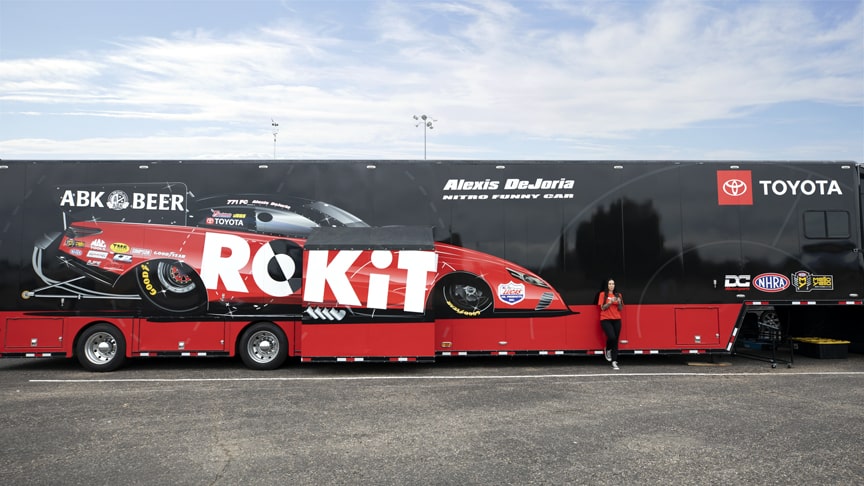 Alexis DeJoria and her Worsham-led crew will officially debut their new racecar on Feb. 6 at the 60th annual Lucas Oil Winternationals on the Auto Club Raceway at Pomona dragstrip. It’s an historic venue for DeJoria who, in 2014, became the first woman to record a sub-four-second pass of 3.997 seconds at this track. In the following event that year in Phoenix, she earned her first Wally winner’s trophy; later that year she was victorious in the prestigious Chevrolet Performance U.S. Nationals at Lucas Oil Raceway outside Indianapolis.

“Alexis is a trailblazer and one of the most accomplished women in motorsports,” Jonathan Kendrick, co-founder of ROKit, declared. “She’s a world-class athlete known for her tenacity, drive for perfection and innate ability to lead the pack. These qualities, along with her unwavering desire to challenge the status quo, make her the perfect ambassador for our brands.”

ABK Beer has been brewing lager and ales in at the Aktienbrauerei in Kaufbeuren, part of Bavaria, Germany, since 1308. It is owned and distributed by ROKit Drinks, part of ROK Stars, a consumer products company co-founded by Kendrick and John Paul DeJoria, Alexis’ father.