In one of the more competitive NHRA race weekends in quite some time, the CARQUEST Auto Parts Nationals saw first time winner Alexis DeJoria rise to the top of her category, Antron Brown make his championship goals perfectly clear and the end of an era for the Mopar Dodge Avenger. 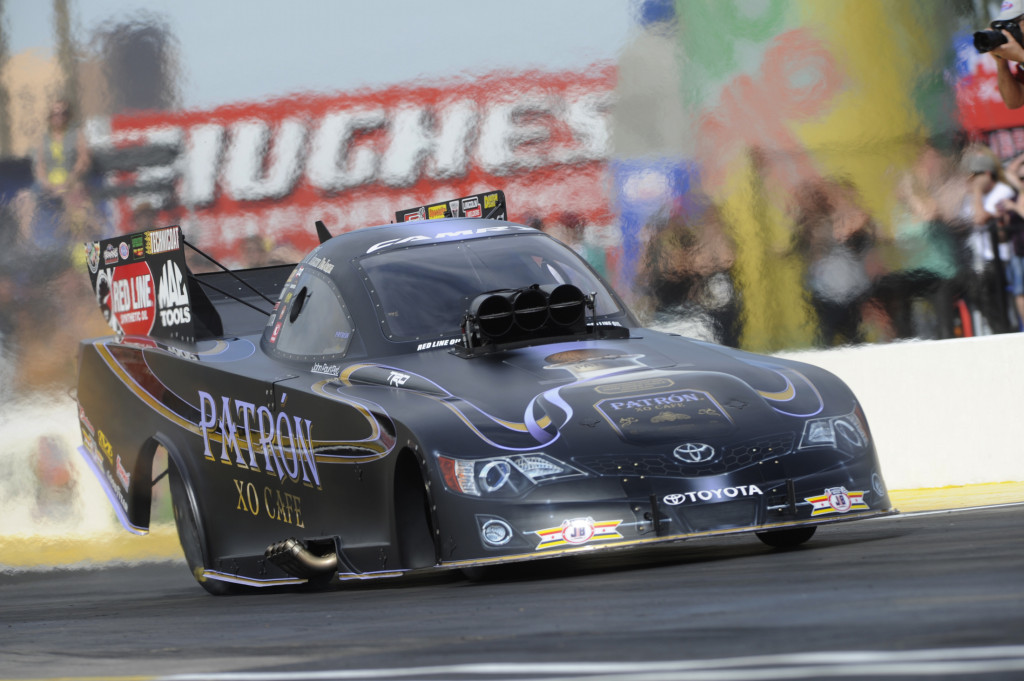 In Sunday’s eliminations she muscled her way through the quick fuel coupe division with great runs all day starting with her first round,  running an impressive 4.065 seconds, 309.27 mph pass to take out first Jeff Arend, then her Kalitta Funny Car teammate and teacher, Del Worsham, with a time of 4.123 seconds in the quarterfinals.

She improved her elapsed time in the semi-finals by snapping John Force’s dominance over the sport, denying him his seventh consecutive final round by outrunning the JFR team with a time of 4.052 seconds, 311.41 mph after Force lost traction. This is DeJoria’s second final of her young nitro career since Bristol of 2012.

Going into the championship round, DeJoria was 2-0 against Hight in previous eliminations and after the finals, she brought it up to three round wins, only this one came with a Wally attached to it. Pushing the tree, she rushed down the track to the tune of 4.048 seconds, 309.27 mph taking down Hight’s tire smoking Ford Mustang, and elevating her Patron XO café team to the winner’s circle.

“Anyone who had any doubts about our team is so wrong,” said the champion. “It takes a lot to form a new team. We’re running well, but we still have things to figure out. Tommy (Delago, crew chief) and Glen (Huszar) did a helluva job. I’m super proud of my guys and all their hard work paid off (with today’s win).

”When we won the finals, I couldn’t believe it. Actually, I can because I know we could do it, but it’s such a shock at the same time. It’s surreal. It’s really amazing. I don’t think I’m going to be able to sleep,” said DeJoria.

The Kalitta crew celebrated with their patented ‘mosh pit’ plunge on the starting line.

The victory at Phoenix moved her up to third in the Funny Car Mello Yello points standings with 156 points, only three points away from second place runner, Robert Hight (159). John Force still leads with 225 points after the completion of the second NHRA Funny Car race in 2014. 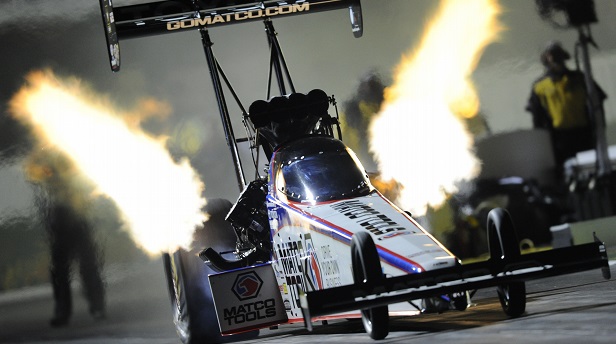 Antron Brown marched through a very tough field of Top Fuel eliminators on Sunday in his quest to defeat Richie Crampton in the Morgan Lucas Racing dragster, defending Top Fuel champion, Shawn Langdon, and No. 1 qualifier, Doug Kalitta, in the semi-finals before facing the newest ‘Force’ of drag racing.

While Brown began his day with a time of 3.825 seconds taking out Crampton, his Matco Tools DSR team stepped up the pace recording times starting in the quarterfinals of 3.771 to overcome a very strong Al-Anabi dragster driven by Langdon. Brown ran 3.782 seconds in the semis to vanquish Kalitta, saving his best of the day to take down Brittany Force with a time of 3.755 seconds, 324.20 mph to her 3.793 seconds, 322.04 mph finish.

“She’s at a young stage of her career and she’s just getting better and better and you can tell it,” Antron said of Force. “That’s how she got to the final.

“I didn’t look at who I was racing. None of these teams are out here to play games. It’s not recess anymore. School is in and you better have your thinking caps on and are ready to go. She was a strong competitor all day.”

It was the 42nd event title of his career, including 16 in Pro Stock Motorcycle. The 2012 Top Fuel world champion also registered the 220th title for Don Schumacher Racing.

But Antron is focused on future races. After losing in the first round two weeks ago at Pomona, Calif. in the opener, he knows the importance of getting the year’s first win.

“I have a lot of confidence when we get to the later rounds in racing. As the rounds go on, our team gets stronger and stronger. We have a great final round kick all the time. When we have to step up to the plate, we step up to the plate.”
Sunday marked his third Phoenix title in the past six years.

“We love coming to Phoenix. This place has been great to us. It’s an aggressive track. They revamped it, and Wild Horse Pass has done a phenomenal job on it. I get amped up every time I come here.

“We’ve had a lot of great wins here. I think that’s why this place holds a special place in my heart for what we’ve been through here and what we’ve accomplished here. It’s definitely one of the tracks that are close to me and my whole team.

Brown now has moved into third place in the NHRA Top Fuel points standings, trailing leader Doug Kalitta (191) by 35 points and only nine behind Khalid alBalooshi in second. 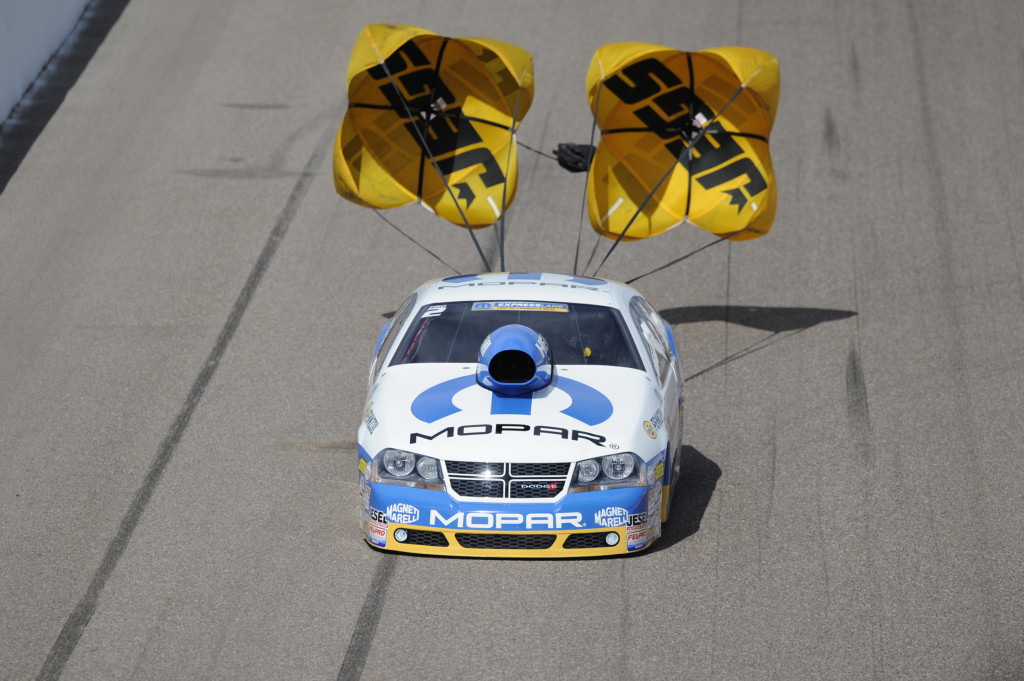 Pro Stock was an all MOPAR affair with Allen Johnson taking the win over Vieri Gaines at the Wild Horse Pass Motorsports Park signifying an end to an era of the Dodge Avenger in NHRA competition.

So far in 2014, Gaines is the most consistent Pro Stock racer with consecutive final round appearances, but once again, in the final round, he found himself on the other side of the finish line.

At Phoenix it was Mopar’s Allen Johnson taking the title in 6.543 seconds, 212.23 mph after Gaines experienced tire shake and coasted to the finish line. It marked his 21st Pro Stock victory and second at the Arizona track.

“I have a great Mopar Express Lane crew that kept digging and wouldn’t give up after we struggled a little early on and got behind in qualifying,” said Johnson who qualified sixth and rebounded from a first round loss in the season opener at the Winternationals.

“V [Gaines] is a class act and running really good in a Mopar as of late and he’s going to be tough all year long,” added Johnson who jumps into a tie (151) for third place with Vincent Nobile in the points behind Gaines (191) and Jason Line (180). “I’m only here because we have a great crew. They worked and got it right, and this is a great way to send this Mopar Express Lube Dodge Avenger out on a winning note.”

Not only was the Mopar final round showdown a fitting way to say farewell to the Dodge Avenger which will be retired following this event to make room for a new Pro Stock Dodge premiering at the next NHRA event in three weeks, but it came exactly 50 years after the first introduction of the GEN II 426 Race HEMI with a win by Richard Petty at NASCAR’s 1964 Daytona 500.

The competitive NHRA Mello Yello Series moves to the east in two weeks with their annual trek to the east coast for the Amalie Oil Gatornationals at the Auto-Plus Raceway in Gainesville, Florida on March 14-16. 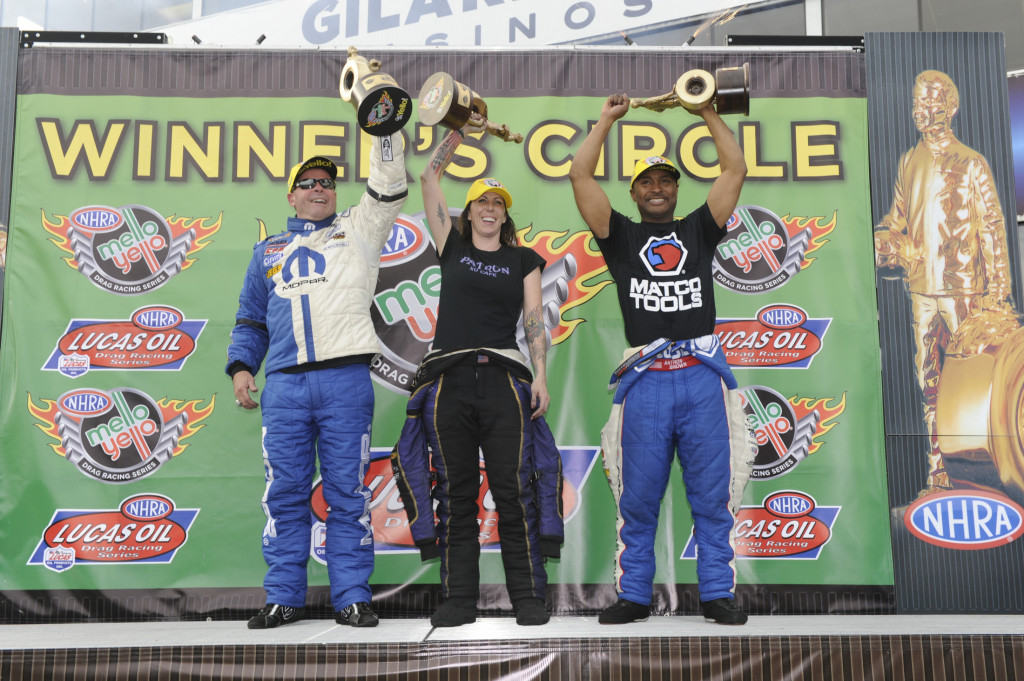