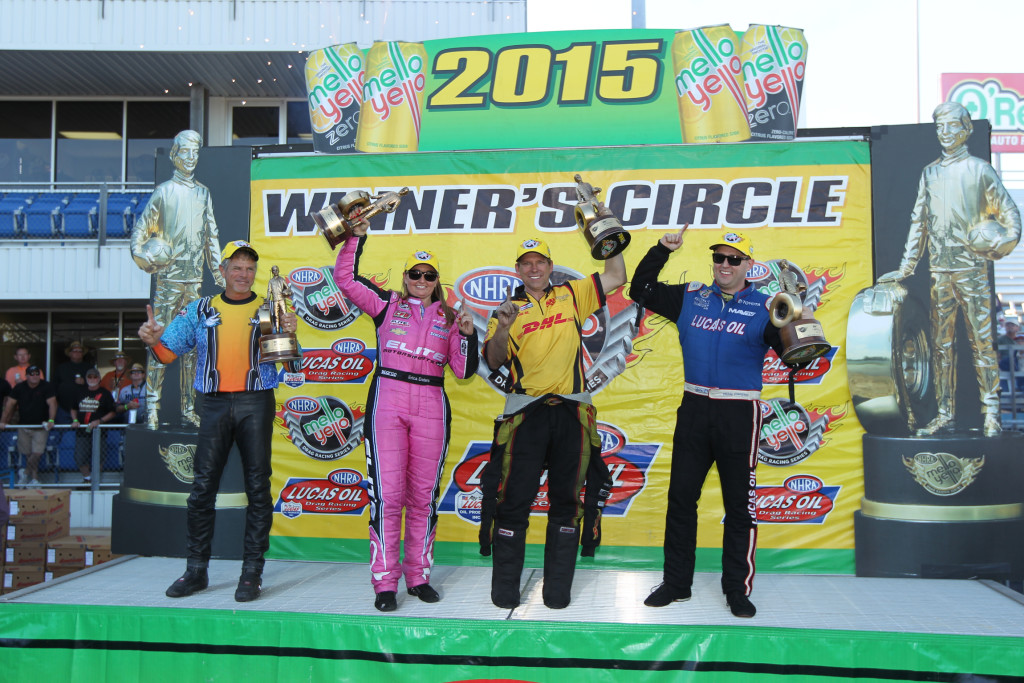 A pivotal race in the NHRA Countdown to the Championship, the AAA of Texas NHRA FallNationals at the Texas Motorplex, saw the reign of Antron Brown end in the semi-finals against eventual Top Fuel winner, Richie Crampton as he pedaled his way to victory over Steve Torrence for his seventh career trophy.  Funny Car was a classic showdown between No. 1 and 2 in the standings with the yella fellas of Del Worsham taking the win in another traction-contested race over the ultra-quick Jack Beckman.

Erica Enders is riding off into the sunset with a 154-point lead in Pro Stock over Greg Anderson and Chris McGaha, beating Jonathan Gray in the finals.  Jerry Savoie rode over the competition, defeating Eddie Krawiec in the Pro Stock Motorcycle money round. 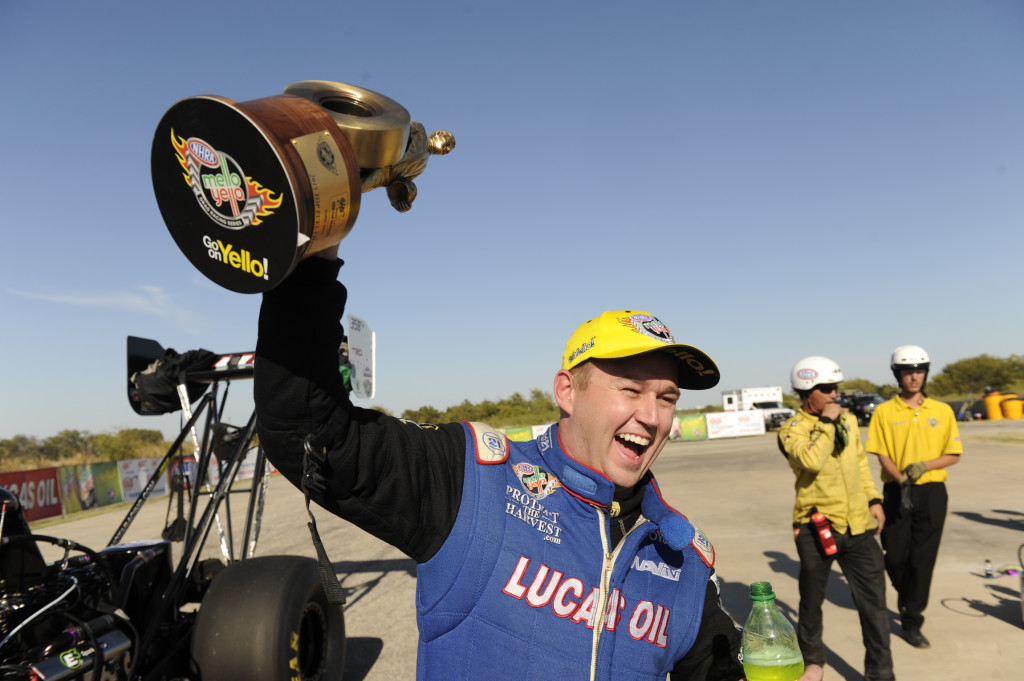 Top Fuel driver Richie Crampton scored his fifth Top Fuel victory of the season on Sunday, taking out points leader Antron Brown in the process to run his career record in final rounds to a perfect 7-0.

“It’s hard to even fathom getting to seven final rounds in the short time I’ve been a professional driver, let alone winning them all,” the second-year pro said.  “I’m just so fortunate that when you give my team so many shots at a race track on a given day that they get it figured out.  I’ve reached a point where I’ve got a huge amount of confidence going into final rounds now.”

Crampton also will have a footnote in the track’s history books as he opened Sunday’s eliminations with the quickest Top Fuel pass ever carded at Texas Motorplex.

“You know, when everything functions correctly, like in the first round when it ran 3.705, for the record, it’s a breeze to drive these things,” he said.  “But it fought us from the second round onward.  We had some clutch controller issues, so that’s where my Lucas Oil team really earned their paycheck today.  Man, we fought that race car all day long and things went our way so these are the kind of race days that are really rewarding.”

In order, Crampton beat Doug Kalitta, Brittany Force, Brown and Steve Torrence in the final.  The Wally round was a thriller with Crampton pedaling the car to regain control when it hazed the tires mid-run.  He managed and produced a time of 3.972 seconds, 283.07 mph to defeat Torrence’s time of 4.041 seconds, 272.17 mph in the finals.

“You know, I felt super confident going into the finals and with that comes success normally,” Crampton said.  “There was no second guessing; we just went out there and tried to get the win.  No one is going to give it to you; you gotta go out there and earn it.  I’m pleased I was able to drive us to the win there.” 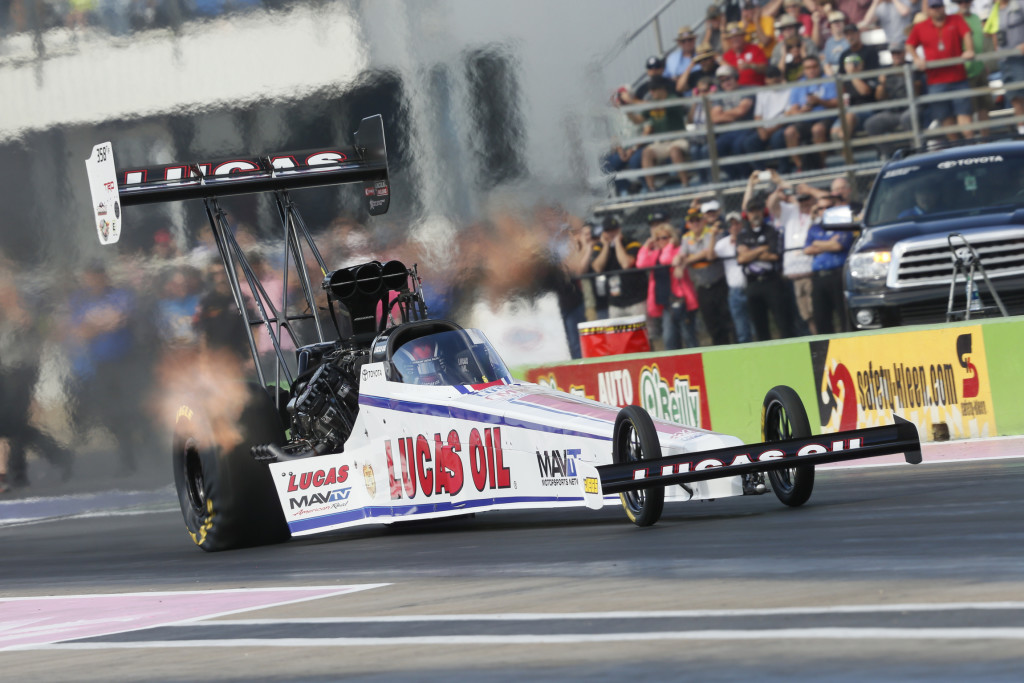 With the victory, Crampton jumped up two spots to third in the Mello Yello rankings.  Brown leads Tony Schumacher by 132-points and 203 away from Crampton. 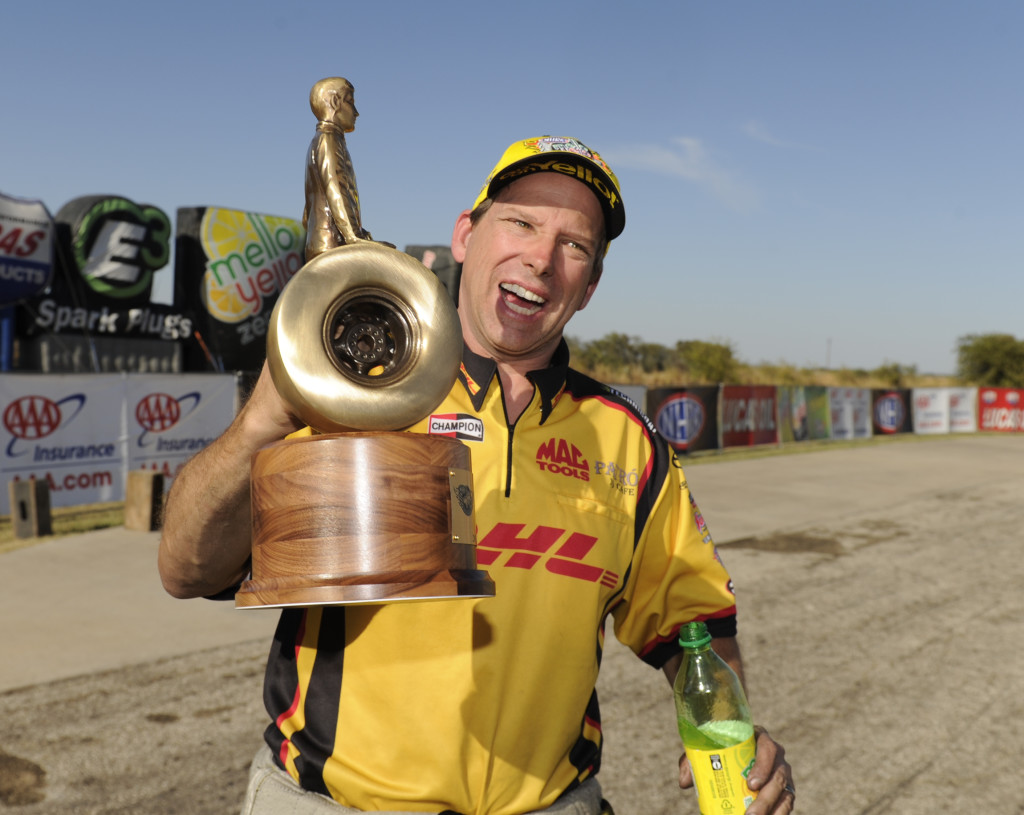 If everything is bigger in Texas, the Funny Car final was world renowned, having Del Worsham defeating Jack Beckman in the a battle of Fuel Coupe titans with the winner walking out with the points lead with only two races to go.

In one of the most anticipated races of the year, both cars couldn’t fight off the slick track conditions under the sunny Texas skies causing both cars to spin their tires.  The Kalitta Racing DHL Funny Car came up big, winning with a 4.041 ET, 272.17 mph to Beckman’s 4.077 ET at 286.25 mph.  It was Worsham’s 29th Funny Car win and 37th overall in his career, winning three of the first four Countdown races.

“It was a great weekend,” said Worsham, who now owns a 38-point lead over Beckman.  “The car ran well all weekend other than the final round where it got a little squirrely.  It was challenging.  We didn’t have the fastest car all day.  Being in the right lane one round didn’t seem to matter, and we got ourselves in a final round.  We kind of showed the depth we have right now at Kalitta Motorsports to come back from that explosion [in the St. Louis final] and win all these rounds.”

Worsham had a strong qualifying weekend, gaining nine bonus points, and was the No. 1 qualifier running a time of 3.917 seconds, just eclipsing Beckman’s best pass of 3.919-seconds in Friday night qualifying.

Worsham advanced through eliminations defeating John Hale, then his Kalitta teammate, Alexis DeJoria and Ron Capps in the semi-finals to set up the epic matchup.

At the green, Worsham was motoring along in the left lane until his Toyota flopper made a dive towards the centerline with him having to navigate a tightrope line to edge Beckman at the stripe. 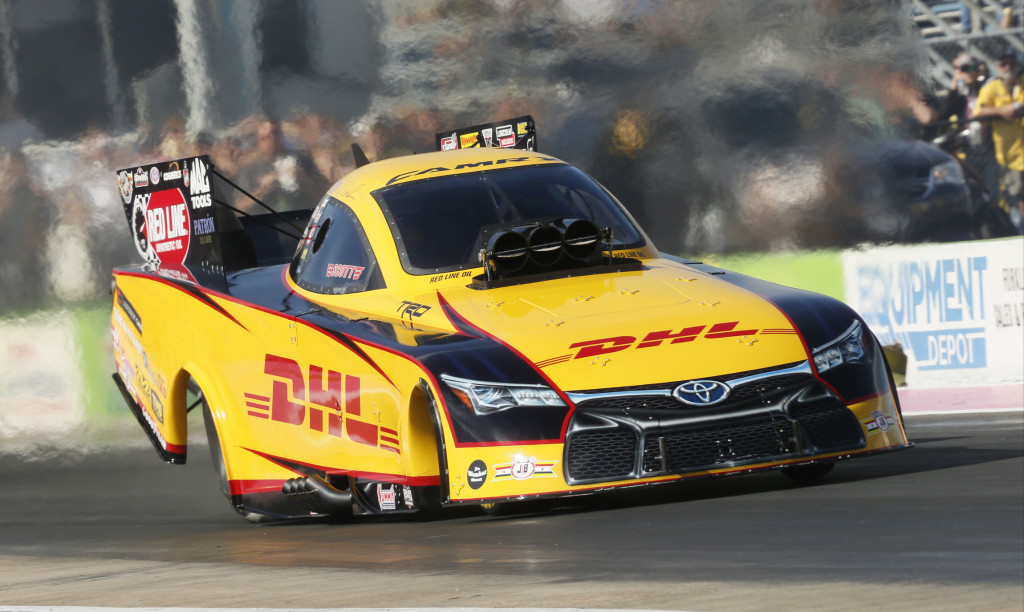 “I think we may have stolen this one today,” said Worsham.  “It was definitely a challenge because we didn’t have the fastest car all day, so in between rounds the whole DHL Toyota team had to go back to work.  The final was crazy.  We got a good start, we were cruising along, and all of a sudden, the car just made a hard right hand turn.  I let off, we hit the finish line, and I didn’t know if we won or not until I heard it on the radio.  Now we’ve got a week off and we aren’t looking at the championship, we’re just going to prepare for Las Vegas and that’s the only thing that matters.” 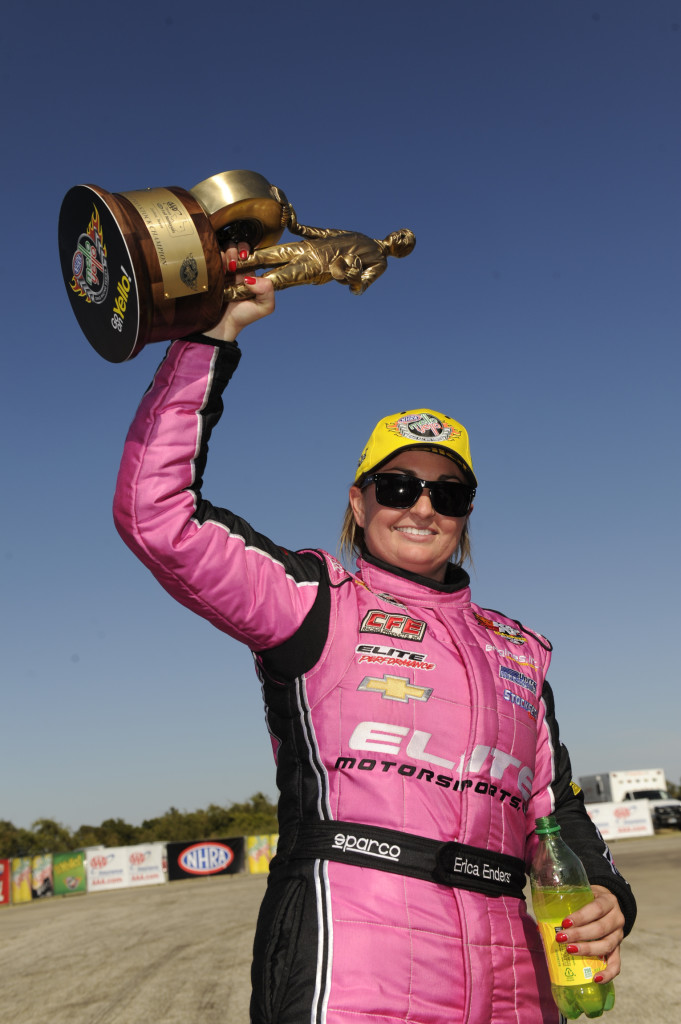 Erica Enders proved she’s the best drag racer in the country Sunday, beating her nearest two rivals in the Mello Yello points to power to a massive 154-point advantage with just two races left in the season.  It was her NHRA-leading eighth win of the year, and first in Dallas.

“I am so glad we were able to get this eighth win here in my home state,” said Enders, who grew up in the Houston suburbs.  “You know, I have been talking about a cowboy hat for months, just waiting to come here and win a cowboy hat, so I’m excited to be able to get that done in front of all of our friends and family.  It’s just a huge blessing.”

A cowboy hat is the traditional winner’s gift at the Texas Motorplex, a complex owned by former Funny Car driver Billy Meyer.  This year, the winner also received a belt buckle to commemorate the 30th anniversary of the event.

As usual, Enders was a demon behind the wheel, taking out V Gaines in Round 1 to set up a big match up with bitter rival Chris McGaha, who is third in the points.  Helping the cause, McGaha had beaten second-ranked Greg Anderson in his opening race.

“Those first two rounds were very significant,” Enders said.  “First round, we watched [McGaha] beat Greg right in front of us and then we crushed his ET by four-hundredths to earn lane choice in our race against him.  We didn’t want to give him anything.

“There is a lot of stuff that goes on behind the scenes that people don’t know about and [McGaha’s] team has been running their mouths.  I said from the beginning we’ll let the scoreboard do the talking.  There’s no need to argue with ignorant people, so when I went up there and he double bulbed me, I said ‘bring it on, I don’t care,’ and I was able to drill him with a .008-second reaction time and then totally out-run him.  I think we sent a big message.  I definitely wanted to beat him, and my guys wanted to beat him even more so that was a nice deal for us.”

There was no looking back from there as Drew Skillman and Jonathon Gray fell in order to give Enders the victory and the big edge in the standings.

“We just have such great team chemistry and great horsepower so I’m a happy girl,” Enders said.  “[ESPN top-end reporter] Gary Gerould said in our interview, that we have an eight-round lead with only eight rounds of racing left, and that’s really cool, but I don’t care.  I want all the points that we can get.

“We go into every race wanting to win more than anything in the world and we do our best to step up to the plate.  You know, I talk about my guys all of the time but I’ll put my money on them every single Sunday, every single round of qualifying, because they are the best.  They bring it and I bring it and together I think the sky is the limit for us.” 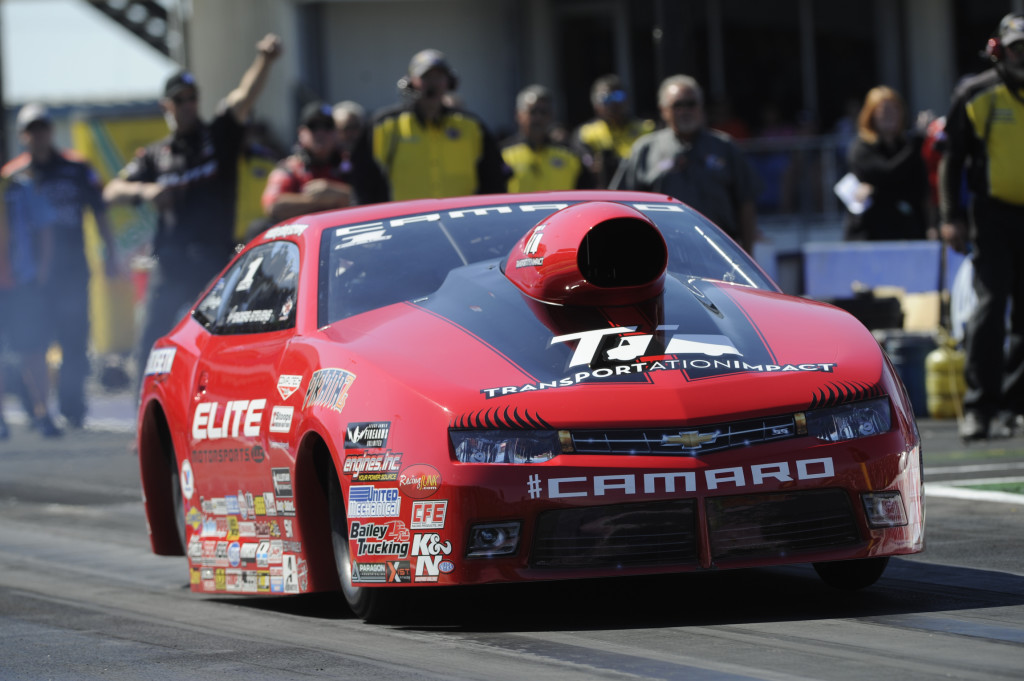 All Enders needs to do is have a 151-point lead at the end of the Toyota Nationals in Las Vegas and she’s a two-time Pro Stock champion.  At present, she leads Greg Anderson by 154 points and McGaha by 166. 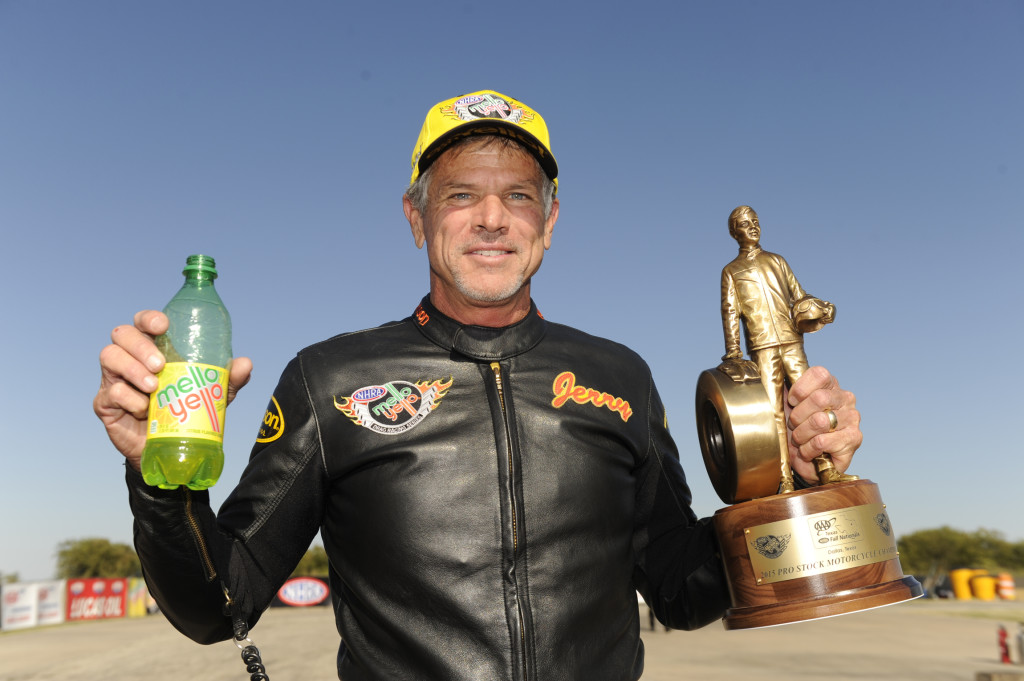 Jerry Savoie rode his Suzuki to his third Pro Stock Motorcycle victory of 2015 with a 6.744 at 198.44 win over Eddie Krawiec.  The result was the fourth career win for Savoie, the event’s No. 1 qualifier, and his first at Dallas.  The win moves the alligator farmer to third in points.

“When you’re making the power like we had this weekend, and I can’t thank Vance & Hines enough for that, you don’t want to throw it away on a red-light,” said Savoie, who moved to third in points.  “We tried to set up the clutch and myself for .050 reaction times, and we ended up a bit slower than that.  But we managed to get away with a couple of close ones, so all is good.”

Andrew Hines is still the points leader by 21 over Krawiec and 31 away from Savoie. 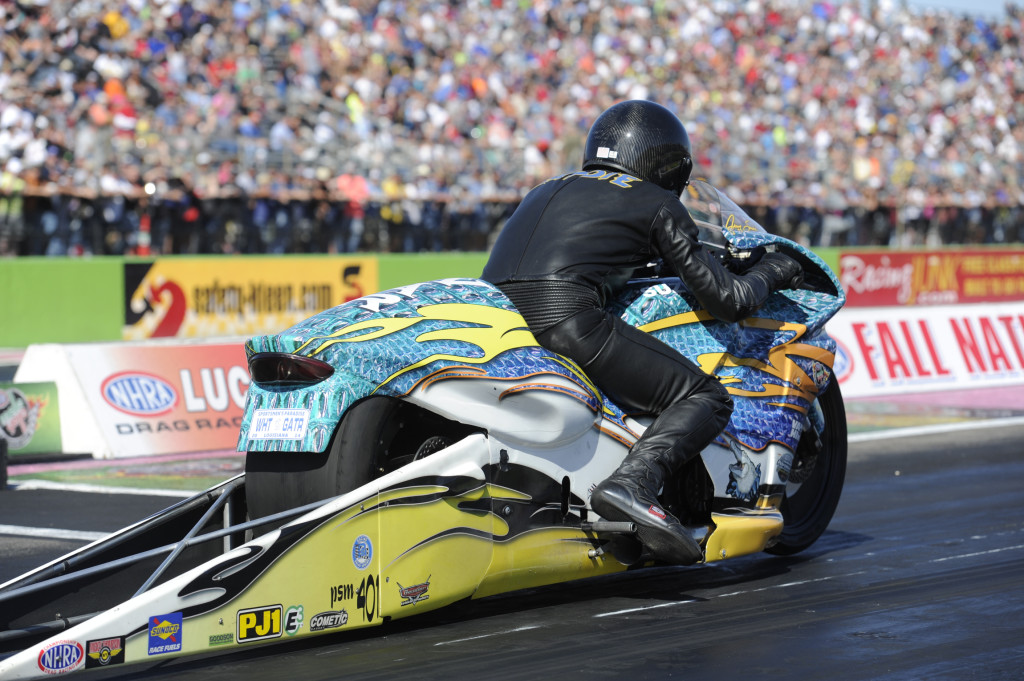 The NHRA Mello Yello Drag Racing Series next travels to Las Vegas for the NHRA Toyota Nationals, Oct. 29-Nov. 1, for the fifth race of the six Mello Yello Countdown to the Championship events on The Strip at Las Vegas Motor Speedway.