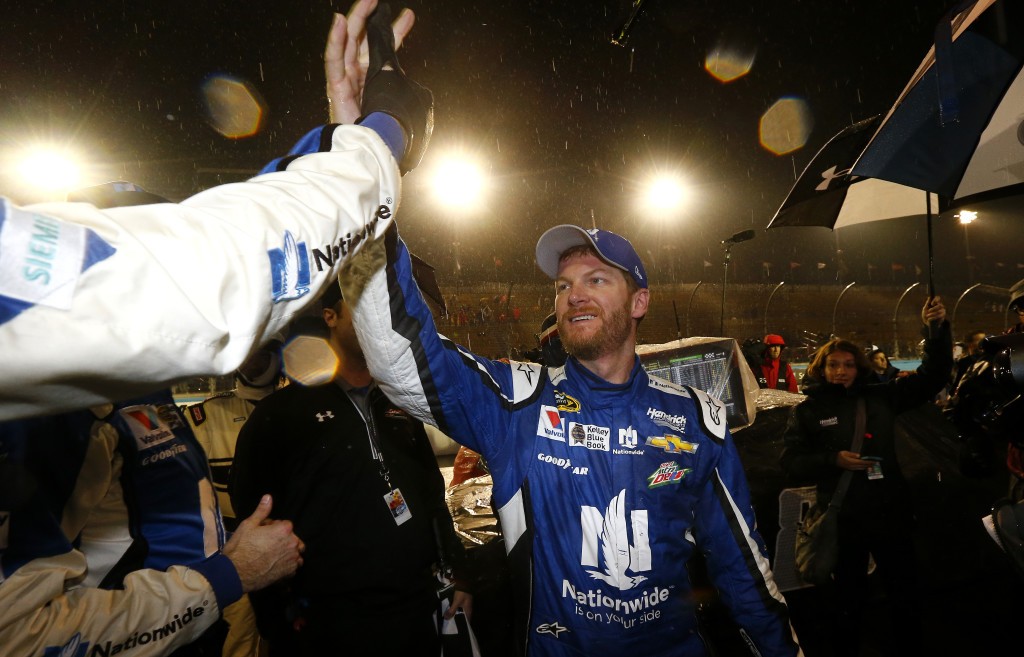 The No. 88 crew of Dale Earnhardt, Jr. picked the right moment and played their race strategy perfectly when luck came into focus at the right moment, giving him the lead on pit road when the caution flew for an accident and then later rain ending the NASCAR Quicken Loans Race for Heroes 500 at Phoenix International Raceway.

Just as the round of second green flag pit stops were beginning, Kevin Harvick was the leader and when the yellow flew for the accident between Joey Gase and Ricky Stenhouse on lap 120, the Earnhardt Nationwide crew had just arrived on pit road.  The move allowed them to change tires and add fuel while the other teams of Harvick and Joey Logano were on track trying desperately to get back up front.  Just as the yellow came out, Earnhardt, Jr. was crossing the start/finish line on pit road, locking his position in as the leader with all places frozen under caution.

Then under the caution period, rain showers came back, eventually bringing out red flag at 9:32 p.m. Mountain Time with 219 of the 312 laps completed.  Seeing the future with Homestead-Miami next week across the country, NASCAR had no choice but to pull the plug and declare Earnhardt as the winner just as showers increased into a deluge. 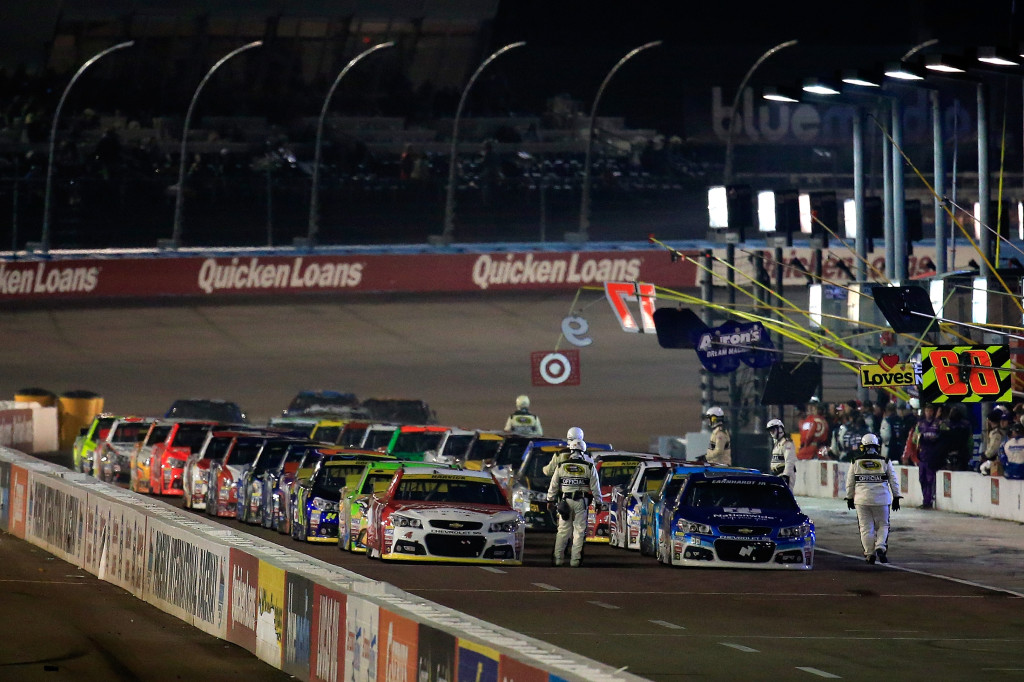 “We had an idea that the rain was in the area, but all the circumstances that played out at the end of the race are just kind of luck, I think,” said Earnhardt, who won for the third time at Phoenix, the third time this season, and the 26th time in his career.  “I want to give [crew chief] Greg [Ives] a lot of credit, and the guys.

“They gave us a good enough car to come here and qualify well (third).  I think the reason why we won this race is the way we qualified to give ourselves a position to be up front all night.  When something quirky like this happens, we were able to capitalize.  It’s a rain-shortened win, but my guys are very proud of it because of how the car ran all weekend and we put ourselves in this position.”

The all-day desert rain delayed the start of the race for six hours after numerous tries by safety crews to keep the track ready to race as the last event of the Eliminator 8 round of the Sprint Cup Chase for the Championship.

The three drivers vying for the title next week at Miami-Homestead includes Kevin Harvick, Kyle Busch and Martin Truex, Jr. joining Jeff Gordon as the Final 4 in the Championship Round. 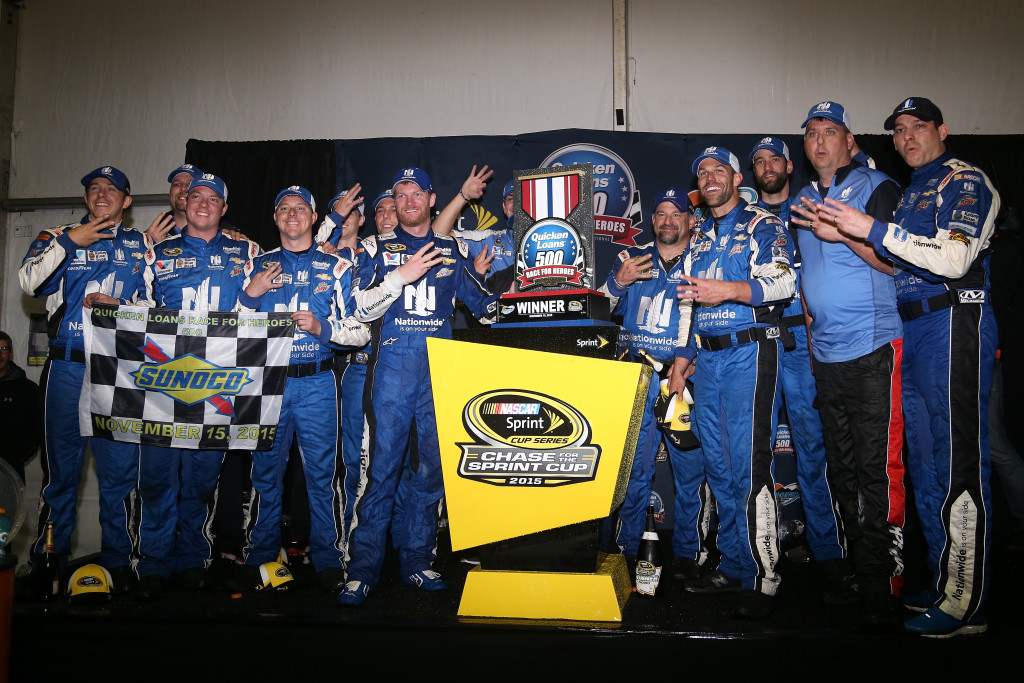 Defending Sprint Cup champ Harvick was relieved to advance, but frustrated at the same time after dominating the race for 143 laps out front.  The periodic caution cost him victory on Sunday, but he knows there’s one more race to win.

“Yeah, it’s kind of bittersweet,” Harvick acknowledged.  “The car just really performed well today, and we were able to lead a lot of laps, and just really proud of the guys for the decisions that they made overnight to get that last little bit out of the car today, and how it performed was really good.

“The caution just came out at the wrong time, and we didn’t get to make up the ground on the race track under green, where Dale was pitted, and the way that they came out of the pits just didn’t time out well.  But still proud of our group, and sometimes you win some of those things, sometimes you don’t, but in the end, the big picture is what it’s all about.” 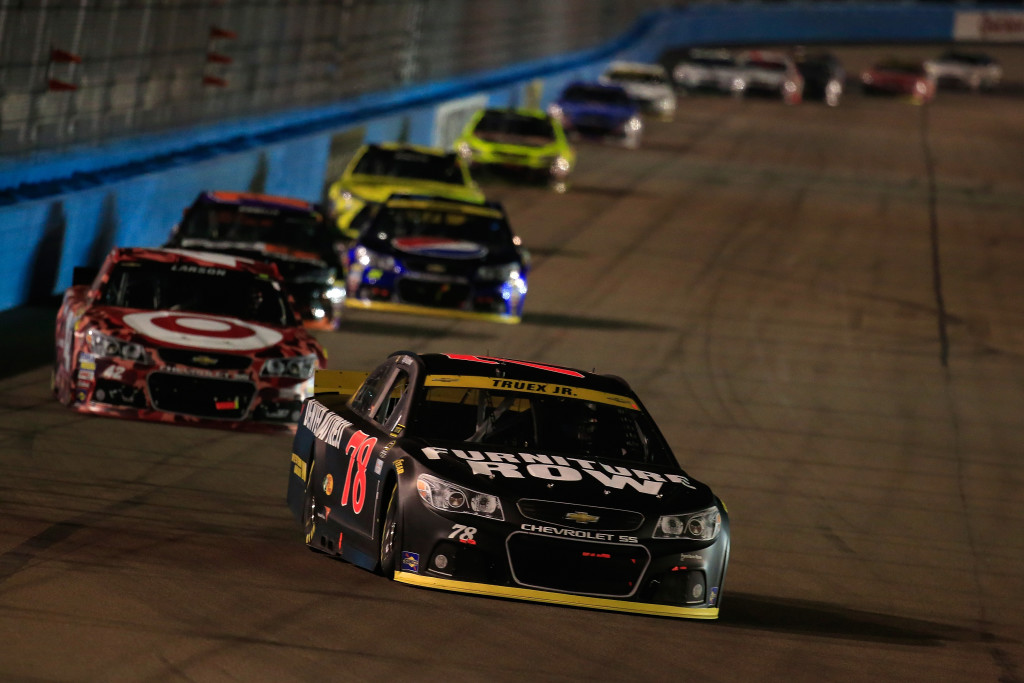 “It’s hard to play the race with rain in the area,” Logano said.  “You don’t know what’s going to happen, but you just hope there’s another shot.  You hope that there’s a restart and if two of them slip up and you’re able to put it three-wide on the bottom, or do something like that — but just didn’t ever have the opportunity there at the end.

“We had plenty of opportunities to try to get ourselves to the front, we just weren’t as fast as the 4 [Harvick].  We were a solid second-place car, but Junior timed it out really well when they pitted on that caution, and it worked out really well for them.” 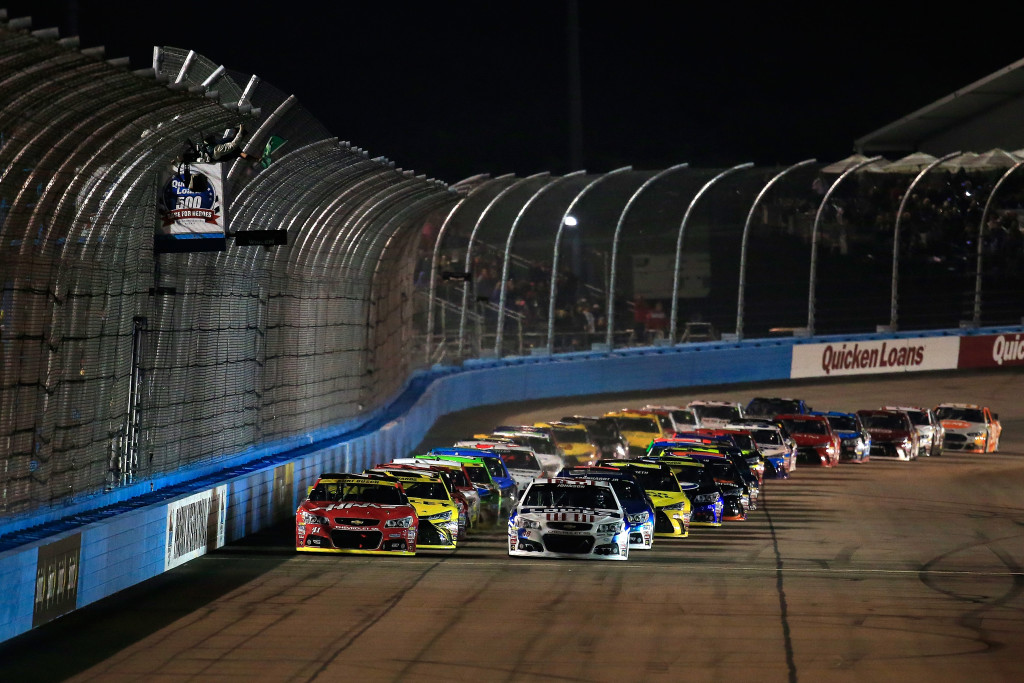 The average speed of the Quicken Loan 500K was 105.512 miles per hour.  There were two caution flags for 29 laps dodging rain for a majority of that time.  In addition, there were eight lead changes among seven drivers.

The circuit moves now to the season finale race at Homestead-Miami Speedway to decide the Sprint Cup championship.  The Ford EcoBoost 400 will start at 3 p.m. EST on Sunday, November 22 on NBC.