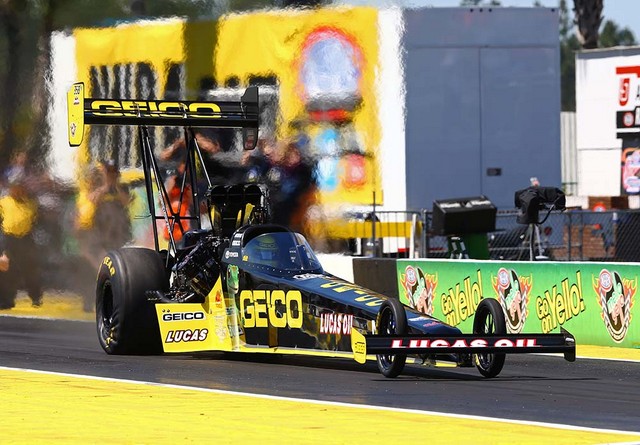 When Top Fuel newcomer, Richie Crampton was tapped by Morgan Lucas to pilot his ride, the surreal feeling of ‘is this really happening’ sent Crampton’s mind spinning in jubilation. For the soft spoken, hard working young man from Australia, the transition from crewmember to driver appears to be seamless and the perfect candidate to take over the steering wheel on this winning team.

Now strapping himself into the GEICO Dragster nearly every Sunday has thrust upon him a new undertaking as the helmsman. Sure, he has to leave the line and keep his 8,000 horsepower Top Fueler straight on the run, but it’s truly the fun factor for Crampton that has him so pumped up for the season.

“It’s even cooler than I expected,” said a grinning Crampton. “I’m still having so much fun climbing into our Top Fuel dragster. It’s still really a dream come true for me. It’s the way all the other drivers have accepted me and most importantly, the way the fans, have gotten behind me. It’s been a really great experience for me to finally get to drive in the category that I wanted to for so long.”

It’s been a slow beginning for Crampton with just one round win in his debut at Pomona against Brittany Force, but since has come up short of the finish line ever since.

“Well at Pomona obviously we had to race Doug Kalitta (in the quarterfinals) and we just didn’t have anything for him that weekend. At Phoenix we didn’t qualify so well, puzzled, and then I made the major rookie mistake against my boss in Gainesville. As a group, we’re working hard as we always do to get the race car running good and qualify well. As far as my side of things, I’m still learning. I’m trying my hardest to elevate my talent level to compete with the best drivers in the world in Top Fuel.

“I think we’ll get there and we’re really looking good to start going rounds on Sunday. To defend for a few race wins is what we’re looking at to get us back up into the higher end of the points field. This GEICO team deserves to be there.”
Crampton from Adelaide, South Australia has been with the MLR team since it was formed in 2007. He’s licensed to drive Super Comp, Top Alcohol Dragster and Top Fuel. In what began with a transoceanic commitment with Cowin Racing brought him to the United States where as a member of a crew he fell in love more with his sport and now resides in nearby Indianapolis.

“Going into a race weekend as a crew member was very exciting for me,” said the 33-year old. “I love working on these race cars. There’s a lot of pressure on the nuts and bolts side of things as well, whatever your particular area as a crew member is, you go to the line, the car does the burnout, backs up and go race, then win the round.

“But now getting into the driver’s seat, my focus is obviously doing a good job. I’m replacing someone that was very good in Morgan (Lucas). He was a winning driver in this car. I can’t help but constantly think about how hard my guys work. It’s the same for Aaron Brooks (crew chief) and Rob Centorbi (asst. crew chief) who works so hard in getting the race car prepared so well, we know it’s good. Just make sure for me not let this GEICO team down and put them where they deserve to be at the pointy end of the field, as we say.”

As a contender for the Auto Club Road to the Future award in 2014, knows that as a rookie driver, mistakes will happen and it’s just a matter of seat-time to get more acquainted with his surroundings.

At the recent Gatornationals, he found himself rushing in the first round against his car-owner, Morgan Lucas in the other lane. Getting caught up in the moment, he had a rookie mishap leaving him seeing plenty of red in front of him.
“My red light in Gainesville was kind of a somewhat natural bump in the road,” said Crampton. “If there was a silver lining to it, it was against Morgan so at least one of our team cars could go on to another round and on. Things like that are going to happen. I’m almost glad to get it out of the way early in the season. Sounds like to most of the people I’ve talked to about it have said kind of the same thing. I learned a lot by doing that and I’m going to do my best to make sure it doesn’t happen again. After all, there’s a lot of pressure on that starting line and I’m not going to change my mind-set or even be stressed out about it. It’s just one of those things that are a part of our great sport of drag racing. It can happen.

“We were both going up to race each other. At Morgan Lucas Racing we never have team orders. Morgan was .056 on the tree. I heard his car was going to run pretty good so it was definitely exciting to race my friend, who is also my boss and gauge my performance off people like him. I wanted to win badly and as a result, we red lighted. Things transpired, it happened and it’s just the way our Sunday ended. It was kind of a funny deal later on.”

At the end of year, he’s one of the candidates up for the 2014 NHRA Auto Club Road to the Future Award presented at the award ceremonies in Hollywood, Ca. He understands it’s going to take steady driving and presenting himself properly to sponsors and the sport. He doesn’t have a plan how to do win it, but just go out there and drive as he should.

“If I drive to the level that I deserve to be chosen for it, there’s no reason this team or race car would hold me back from achieving that goal,” smiled Crampton. “This is a great team that I drive for so I’m like a lot of the other rookies, they have just as good of an opportunity as I have before me with such a great team to drive for. I’m like them. I have all of the tools to go out there and win races and win rounds. I just need to be a robot in the race car and win rounds. I think with that I can hope to win the rookie of the year award.”

Unlike most beginners in the sport, Crampton assumed even more responsibilities by becoming a representative for three major companies.

“When I was elected to drive this car, it was like ‘Oh, I get to drive this Top Fuel car’, then the reality of it all started setting in of all those responsibilities of being a good spokesperson for GEICO, Lucas Oil and Toyota. They deserve a great ambassador that is good with the crowd and speaks well and all that made me nervous the thought that I was going to have to step to the plate and play that kind of a role.

“Honestly, it’s just been a great experience that I’m now getting to that level. None of the sponsors put any unreasonable amount of pressure on me to do anything beyond my talent level or anything like that. I’ve had a great time. Corresponding with all of our GEICO associates, I’ve learned a lot already. But still have a lot to learn. It’s really been a great experience for me to work with them and the other companies. They have been great to me and I think we’ve developed great relationships between me and all of our sponsors. It’s only going to get better.”

Are there discussions about a humorous GEICO commercial in your future?

“Honestly, we have talked about it a little bit,” Crampton laughed. “I’m not too sure how the layout would work. We joked that there would be some funny correspondence between me and the Gecko given our two British accents. I think it’s definitely a possibility for later in the year. The truth of the matter is I’m finishing the last year of a three-year agreement with have with GEICO, so we’ve got a lot going on right now. We’re looking at to re-up the sponsorship agreement with them and that would be great. Hopefully, you’ll see me with one of the great GEICO characters in one of their commercials. I’m not sure if I’m ready to be an actor yet or not. I’m excited either way.”

Now he is going into his fourth race of his career this weekend at the SummitRacing.com Nationals on the Strip at the Las Vegas Motor Speedway. As a crew member for all those years has provided Crampton with a little more information in his head that he can relate to the track.

“If one lane has a bump or crowns to it, there are other things that can still make that lane a better one than the more favorable looking one,” said Crampton. “We always take that into consideration on a day by day, run by run basis. Obviously, I leave that up to Aaron Brooks (crew chief) and Rob Centorbi (Asst. Crew Chief). The pair does a great job of reading the racetrack. It’s always nice to qualify well and have that lane choice in case there is something that you’re not too excited about on one side or the other. We’ll just try to qualify the best we can and if it’s good enough, we’ll have lane choice for round one.”

The Strip at Las Vegas Motor Speedway presents added difficulty for crew chiefs with the higher than normal heat and 2,000 feet elevation, but the GEICO team is prepared.

“Racing at altitude is difficult with the thinner air. It’s a little hard for Aaron to make horsepower in those conditions, but I have all the confidence in the world we’ll run well there. The team has run well there in the past. It doesn’t appear we’re doing so great on paper right now. I still feel we have a great race car that can win and Las Vegas sounds like a great place to get started.”

In the ‘Entertainment Capital of the World’, are the distractions on the Las Vegas Strip a challenge for the young Crampton not be tempted?

“I’m not a huge gambler and I’ve taken in the past a few shows in Vegas,” he said. “During a race weekend, I like having a lot of down time, relax and not have any late nights. I’m more focused on racing that I won’t be participating in many extra-curricular activities. We have the fan fest autograph session (Thursday at 5 p.m. PDT at the New York, New York Hotel and Casino) that I will be going to with a bunch of other drivers, but that’s about it.