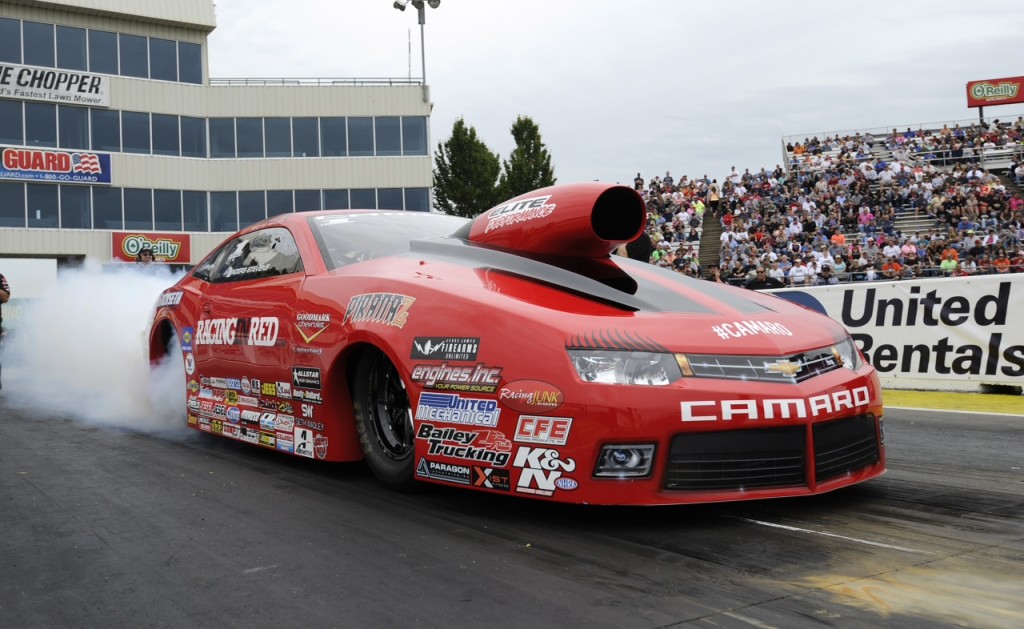 Richie Crampton earned his second Top Fuel win of the season and shows no signs of a sophomore slump.  Jack Beckman also won for his Don Schumacher Racing organization again this year receiving their 250th team victory in NHRA competition and produced regular three-second Funny Car passes all day.  Erica Enders-Stevens took the lead Pro Stock points in all rounds of qualifying and eliminations in her red-hot Camaro.

The NHRA officials managed the rain delays on Sunday giving fans a true show of speed and record runs all weekend at Heartland Park Topeka. 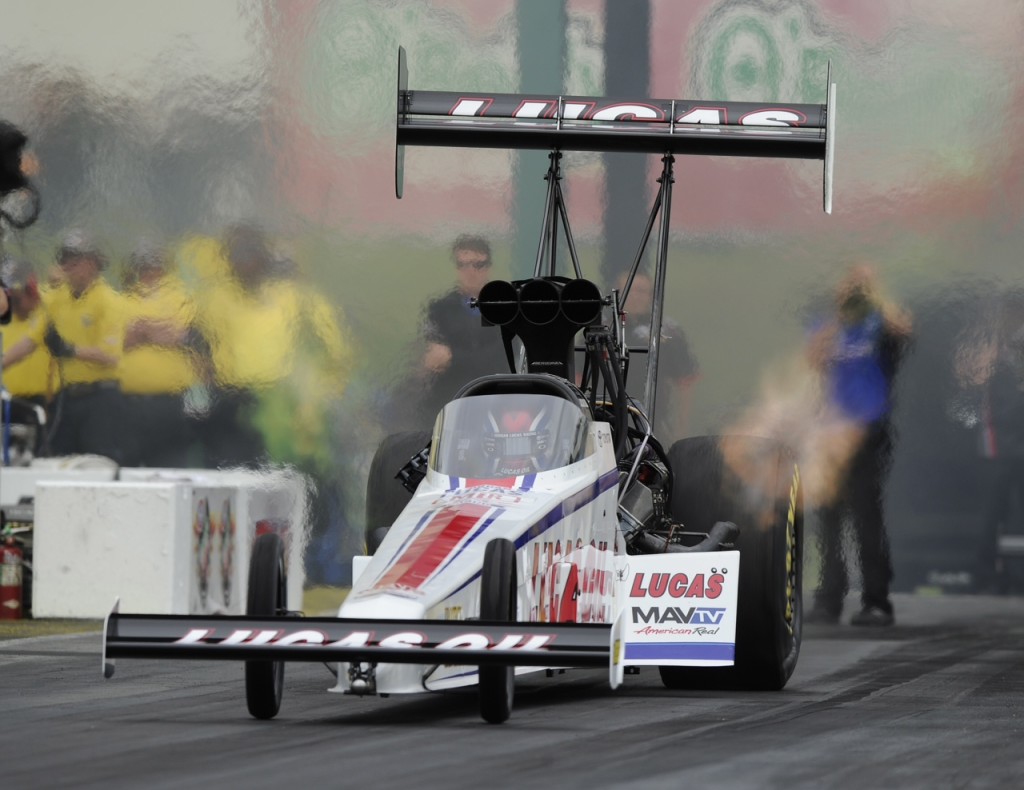 In Top Fuel, the new norm is either run a 3.70 pass or go home.  The 2014 Auto Club Road to the Future Award winner, Richie Crampton and his crew chief Aaron Brooks used that method in capping off an extraordinary weekend in The Sunflower State running low ET of the event at 3.710 seconds and fending off Larry Dixon in the finals.

Crampton came off a triumphant victory at the rain-delayed race with redemption on his mind after his lack-luster red-lighting performance last weekend in Atlanta against Larry Dixon in round one.

Over the last calendar year, the young Australian scored his first career victory in Englishtown, N.J., last June and since then Crampton has won four times in 24 races – equal to a full season – second only to championship-winning drivers Tony Schumacher and Antron Brown, each of whom has won five times over that span. 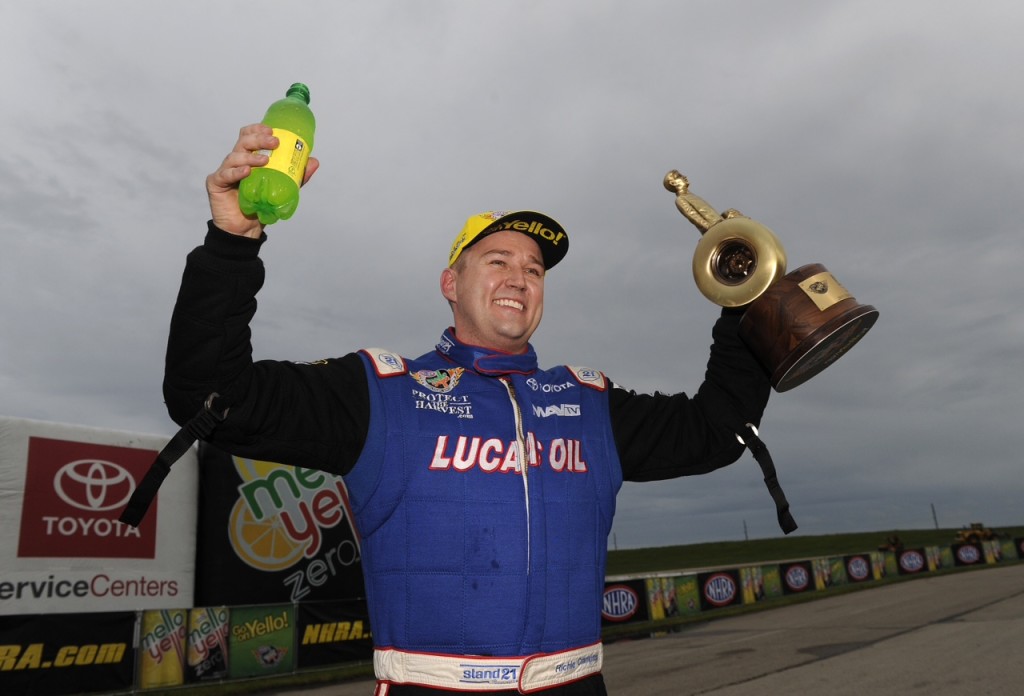 “It’s huge to get two wins so early in this sophomore season of mine.  It’s surreal.  It says a lot about Aaron Brooks and the Lucas Oil team that puts this race car together flawlessly week-in and week-out.  Today, I got a little redemption for my red-light in Atlanta.  It feels pretty good.”

Crampton has won in the extremes of both the warm conditions of the Las Vegas event and at Heartland Park Topeka where potential record-setting conditions were in place.

“You’ve got one extreme or the other,” said Crampton.  “Aaron Brooks is deadly this year.  He has both sides of it figured out, we believe, and that makes me and everyone on the team extremely confident that we can really try to contend for a championship this year.

“There were great conditions, good enough to try to set national records.  Hats off to everyone who made this happen and the Safety Safari that did a fantastic job once again.  I can’t believe how many fans hung tough through this bad weather we had and enjoyed the racing with us.  I’m glad we were able to put the Lucas Oil car in the winner’s circle today.”

Crampton started the day with a 3.762-second pass at 316.52 mph to outrun Kyle Wurtzel’s 3.909 seconds.  Then in the second round, Crampton and Brooks lowered the track elapsed time record to 3.710 seconds in a thrilling win over Spencer Massey, who ran 3.731 seconds at 327.82 mph, and that run could have lowered the national record, as three cylinders were out close to the finish line.

“I’m happy with my progression, but I still need to knuckle down and do a better job in the race car,” said Crampton.  “For being in my second-year driving, all of this is a dream come true right now.” 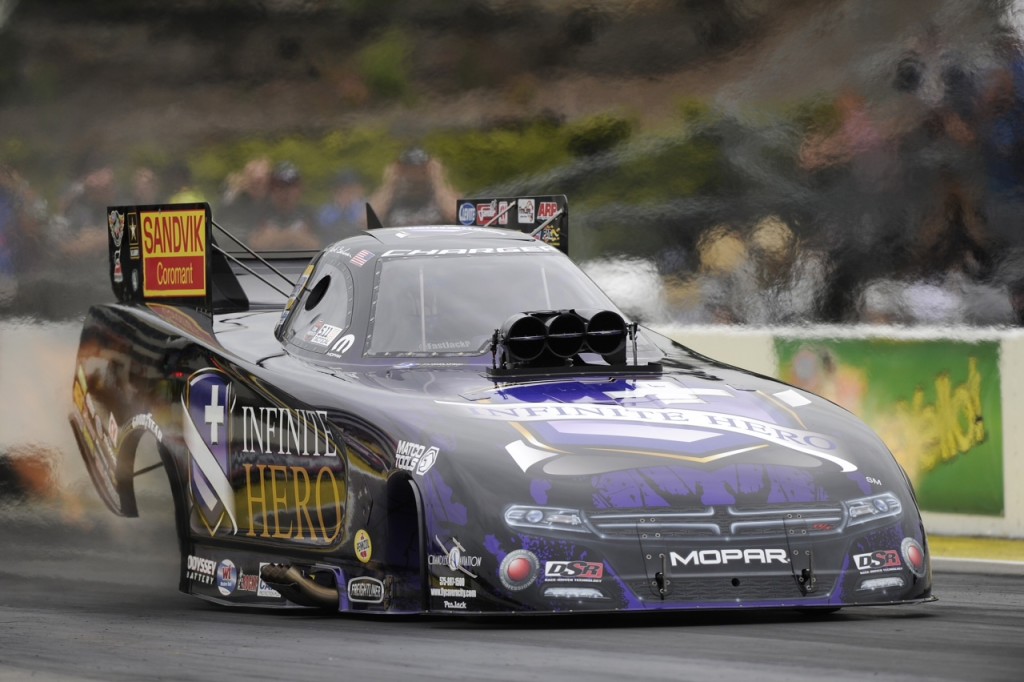 The NHRA Funny Car teams at Heartland Park stepped up the program over the weekend that saw 15 different three-second passes with winning driver, Jack Beckman leading the way with five.  Beyond winning for the 17th time in his professional career, the 2012 world champion made NHRA history by becoming the first driver in a Funny Car to record four consecutive runs below 4 seconds when he dipped into the 3-second range in the last two of three qualifying sessions then started championship eliminations in the 3s for the first two rounds.

Crew chief Jimmy Prock pulled out one more for the final, as Beckman downed John Force for his second win of the season, 3.984 to 4.002 seconds.  This win also served as Don Schumacher Racing’s 250th team victory. 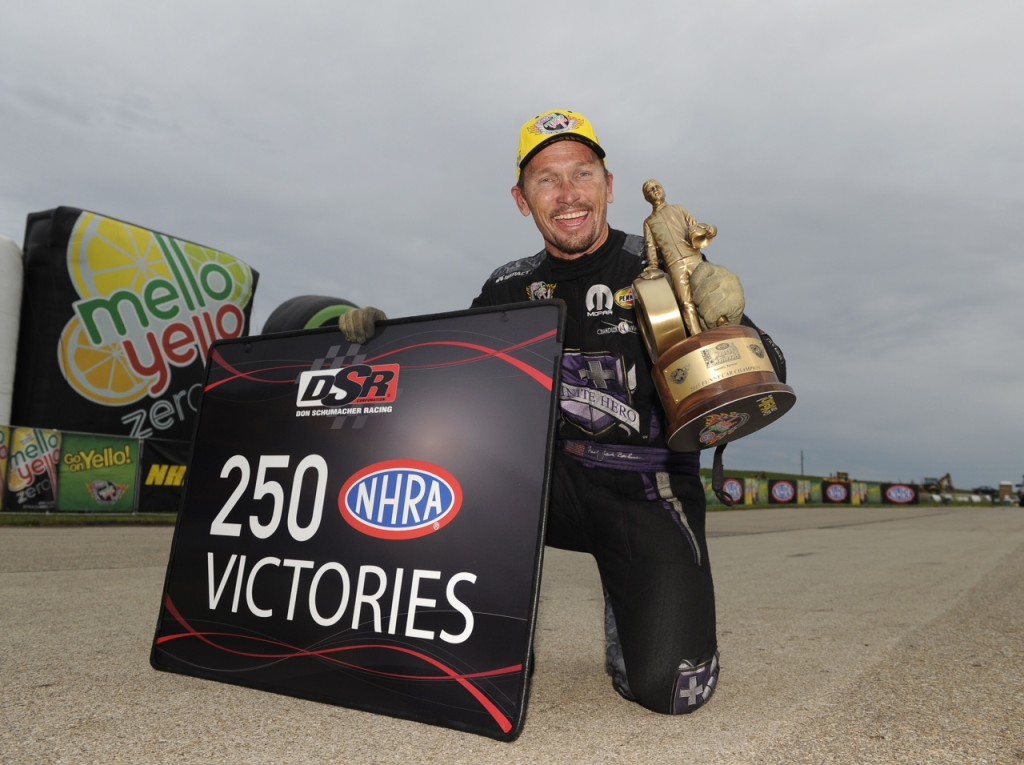 That included his career-best time of 3.972 seconds in the quarterfinals that is the seventh quickest ever.  His time of 322.65 mph in qualifying on Saturday is a career best.

The semi-finals of Funny Car brought Beckman some keen insight as teammate Matt Hagan smoked the tires and lost ahead of him, and then his Infinite Hero car followed by starting its run against Del Worsham the same way.

“We go out and do the same thing as Matt; it shakes the tires,” said Beckman.  “I’ve got to pedal it and by then Del is so far in front.  When you pedal the car it shortens the fuse on the grenade.  You take it as far as you can until you know you can’t catch him and then you lift.  I thought another hundred feet and I couldn’t catch him and then his car shuts off.

“That was a lucky break for us but like (assistant crew chief) Chris Cunningham says, ‘We make our own lucky breaks.’ ”

“It was an odd deal too, as I’ve had many weekends like this; where there are so many weather delays and you get the entire event done on Sunday still.”

Beckman won the NHRA Kansas Nationals in 2012 and he went on to win the championship.  Maybe this is a little foreshadowing to later this season.  For now, he’ll just savor beating a legend.

“I have all the respect in the world for John Force,” he said.  “It makes a difference when you race him.  You’re getting a chance to play against Babe Ruth.  It’s so unique in our sport, that a guy (who is) the best there has ever been in this sport, can still mix it up with us.  This trophy will be extra special because it was John Force we beat in the final.”

It probably doesn’t hurt to beat him with Jimmy Prock, Force’s old crew chief.  Beckman has now made more three-second runs that anybody else in history.  Jack has 11, John has 10.  However, following the semi’s, Beckman wasn’t lamenting not running a third straight three-second pass in eliminations, although he wasn’t afraid to poke a little fun at the barrage of performance.

“It was a little disappointing, wasn’t it?” he quipped. “Del (Worsham) was so far out there, we got a lucky break that something happened to their car.  That was dodging a huge bullet.  I was delighted to get that win light and we’re delighted with the way the car is running.  We’re racing for a trophy; we’re not racing for a time slip.” 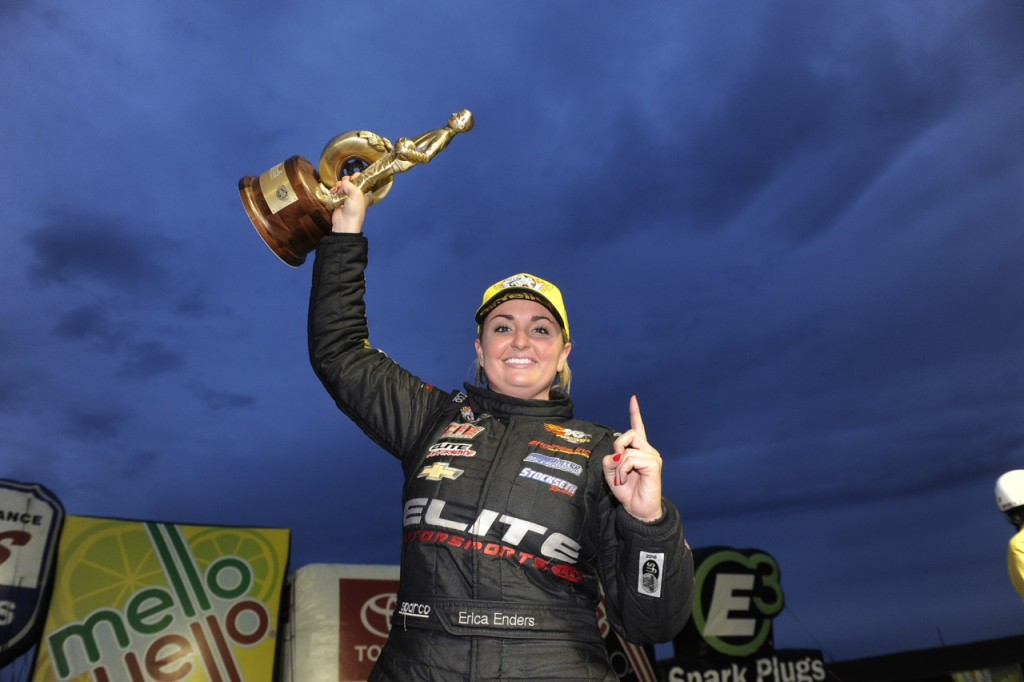 Erica Enders-Stevens and her Elite Motorsports team scored a dominant victory at the NHRA Kansas Nationals, topping a perfect weekend with a win over Greg Anderson in the final round.

Enders was the quickest in all three qualifying sessions — the fourth was rained out — won the No. 1 qualifier and was quickest in all four rounds of eliminations to score her third victory of the season and take over the Pro Stock points lead.

“The last time we did this was Norwalk (Ohio) last year,” said Enders-Stevens.  “It speaks volumes of what they’re capable of when they’re given the tools that they need, and that’s what (team owner) Richard Freeman has provided them. I’m just really proud.”

Enders won for the first time in a new R&J Race Cars Chevrolet Camaro after the Elite team parked the championship-winning car of 2014.

“To be honest, I didn’t want to let go of the car I drove last year because we had such an awesome relationship,” Enders said.  “We had a lot of success together.  We’ve had 29 runs on this car, and it’s still very new and we’re still learning all about her.  Rick and Rickie Jones built it and it’s a tremendous masterpiece, and we’re just going to get better and better.”

“I missed the Tree a little bit against Larry Morgan,” said Enders, whose reaction time was .030.  “I knew I was late and was looking over to see where he was.  It was only a seven-thousandths margin of victory, so I guess if we had a lucky round that was it, for sure.”

“He congratulated me down there,” Enders said.  “He doesn’t like to lose to anybody; he’s got a very competitive spirit.  We all do in Pro Stock.  But everything’s cool, and I’m proud that we got the win.  He got us (in Atlanta) and he outran us, so I was happy to pay him back just a little bit, but all in good fun.”

Enders now has a 59-point lead over Jason Line, who lost in the first round, after eight of 24 races.