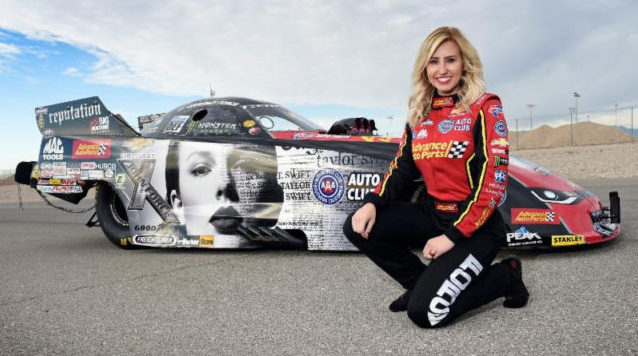 Courtney Force will hope that her new look Chevrolet Camaro SS will have a positive outcome in Pomona this weekend. Force’s car will be sporting the album artwork for Taylor Swift’s album Reputation, which is fitting considering Force’s reputation for winning.

“I’ve had an incredible experience working with our partners, Advance Auto Parts and Big Machine Records, this season and am honored to drive the special Taylor Swift reputation car for our final race in Pomona,” Force said. “My team and I are always playing her songs to get in the zone and prepare to battle it out against the boys on race day.”

Force enters the final NHRA event of 2017 ranked third in the Funny Car standings, 125 points behind her teammate Robert Hight.

“I hope to finish out our season on a high note while promoting Taylor’s album release at over 330 mph and hopefully celebrating in the winner’s circle with my team on Sunday,” Force added.

T Swift is no loser either, in fact, she holds the record for sold out shows at the Staples Center in Los Angeles. Here at RJ, we are more of Foghat fans but we support whatever gives racers an edge.