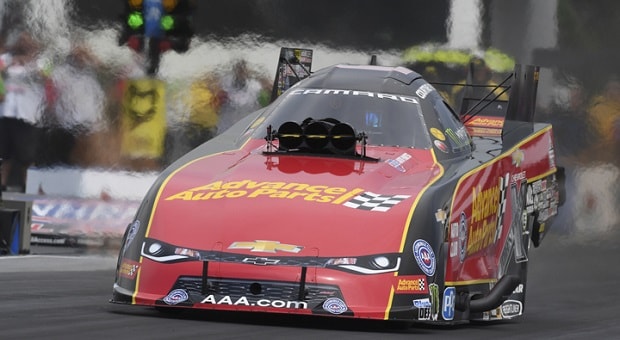 The key to gaining Wally trophies and national championships in NHRA Mello Yello Drag Racing Series competition is to be consistently fast. There’s one driver who’s doing so more than any other, edging toward the halfway point in NHRA’s 24-race 2018 campaign.

That would be Courtney Force, 16-time Funny Car champion John Force’s youngest daughter. Last year she finished third overall in Funny Car standings despite not winning a single race. Courtney Force was able to race consistently throughout that season but unable to close the deal, as was the case for her older sister Brittany, who is the reigning Top Fuel champion, and brother-in-law Robert Hight, who secured his second Funny Car title in the season’s final race.

This year that’s changed. It remains to be seen whether Courtney Force can continue to overpower her competition and secure her first NHRA Funny Car world title, but she, together with crew chiefs Daniel Hood and Brian Corradi, are working towards that conclusion at Pomona in November.

This past weekend at race No. 10 in Dinwiddie, Virginia, Force showed her competitors she’s the 2018 boss of the flopper class, earning the No. 1 qualifier and taking her fourth Wally national trophy of the still-young season. She ran low ET of the meeting for her class along with top speed en route to winning the race – and vanquishing her dad in the finals. 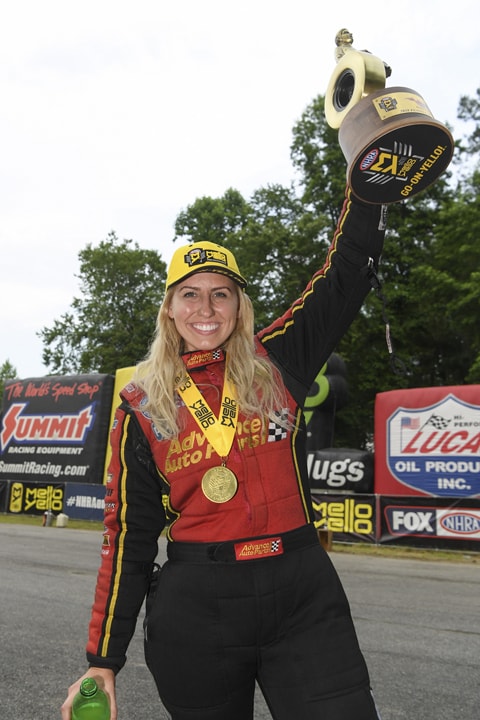 Force earned plenty of “little points” in the process, being quickest in three sessions (1st, 2nd and 4th) and third-quickest in the third qualifying round. In Sunday’s eliminations, Force beat Jeff Diehl, Jim Campbell and J.R. Todd before taking on her father in the final round. “It was exciting to be in an all-Force final and to see that PEAK team (of her father) do so well,” Courtney Force said. “Brian Corradi and Danny Hood have done a great job with this team and race car. We have been so consistent – but we stumbled a little in the first round – and got away with it.”

Force has some great memories of Virginia Motorsports Park (VMP), site of this weekend’s Virginia Nationals, where John Force has four victories (and nearly a fifth). It’s been a decade since the series raced at this track, and Courtney remembers that for her seventh birthday, all she wanted was to go to a race with her dad. It happened to be at VMP: “We got to celebrate in the winner’s circle and I was wearing a ‘Virginia is for Lovers’ t-shirt. I am excited to wear that shirt in the winner’s circle today for my win,” she said.

“I think it was surreal to come to this very track with him again and race him in the final round. That was pretty cool. I don’t think I could have written a better story. I was going to be excited whether he got the win or I did. There were so many fans here it was amazing.” The victory marks Courtney Force’s 12th during her seven-year professional career; each of her 2018 Wally trophies has been earned from the No. 1 qualifier position, but she’s thinking of the length of this campaign and looking forward.

“This is just the beginning of the season and we have to maintain our focus. So much credit goes to my team and the job they have done – I’m trying to keep up with them and perform well as a driver. Our focus is getting to Indy and having a cushion, locking into the Countdown (to the Championship, a six-race playoff series for the top 10 that closes each season and decides each champion). Right now it is great, but we really have to keep it all season long if we want to end up on top at the end of the season.”

No rest for NHRA teams as they head to Bristol, Tenn. for the Fitzgerald USA Thunder Valley Nationals at Bristol Dragway. Can Courtney Force keep her team’s momentum going?