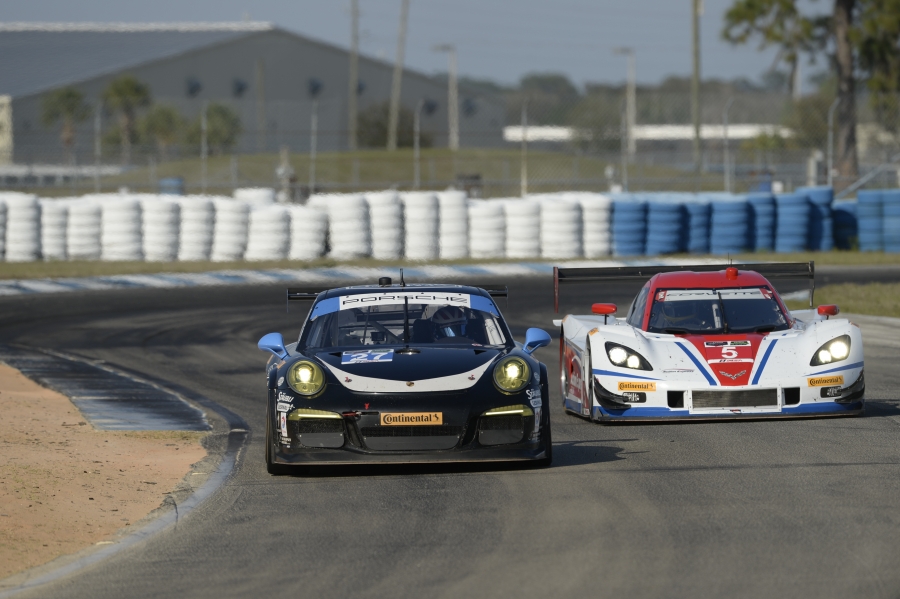 Photos: Courtesy of the IMSA

The 2014 12 Hours of Sebring race wont kick off until next weekend but late last month, the track was opened to endurance racers for the official IMSA winter testing sessions and the most impressive cars in the field were the Daytona Prototype (DP) Corvettes and the newest Porsche 911 racers. Only 42 teams headed to Sebring for the 4 official winter test sessions after 67 cars competed in the Rolex 24 last month but this abbreviated test run gives us an early look at the teams to watch as we head into the 12 hour long Sebring race. There were 12 cars from the Prototype class (P), 4 cars from the Prototype Challenge (PC) class, 8 cars from the production based GTLM class and 18 cars from the production based GTD class.

After Corvette Daytona Prototype cars claimed the top 5 spots at the Rolex 24, it should come as no great surprise that the fastest car at the Sebring winter testing was the same #5 Action Express Racing Corvette DP crew that claimed overall victory at the Rolex 24. Surprisingly, the Nissan powered Morgan entry was 2nd in the prototype class while the Spirit of Daytona Corvette DP was 3rd fastest. Chip Ganassi Racing’s Ford EcoBoost powered Riley race car was 4th in the prototype class and the Honda Performance Development ARX-03B rounded out the top 5 for the fastest class in modern endurance racing. The new diesel powered Mazda Skyactiv-D race car finished last in the prototype class and it was also slower than all of the Prototype Challenge and GTLM cars.

In the single-brand Prototype Challenge class, ORECA FLM09 race cars filled all four positions with the 8Star Motorsports team claiming the fastest time in the small and fairly unexciting class.

The GTLM and GTD classes are both production based with names like Porsche, Corvette, Viper, Ferrari, BMW, Aston Martin and Audi campaigning race cars that are remarkably similar to the production cars which so many of us dream of owning.

In the GTLM class, the same #911 Porsche 911 RSR that won the class at the Rolex 24 came out flying and as a result, the #911 911 was the quickest car in the class while the #912 team car was 2nd fastest in the Sebring winter practice. The only SRT Viper GTS-R at the winter session was third fastest in GTLM while the #3 Corvette C7.R was the 4th fastest in the class. The strongest running Ferrari in the field finished 5th fastest followed by a BMW in 6th, another Porsche in 7th and the other Corvette in 8th. Less than two seconds separated the entire GTLM class, making it the most competitive class in the winter test sessions.

As was the case in GTLM, the production based GTD class was dominated by Porsche 911 race cars with a pair of 911 GT Americas from Park Place Motorsports and Alex Job racing turning in the fastest times of the largest class. Porsche 911 GT America race cars also claimed the 7th through 11th positions and the 15th and 16th spots. A BMW Z4 was 3rd quickest in GTD, a Ferrari 458 was 4th and a new Viper GT3-R was the 5th fastest in the huge class. The only Aston Martin in attendance was 6th fastest in GTD and the fastest Audi R8 LMS in the field – the car campaigned by the familiar Flying Lizard Motorsports – was 12th quickest in the GTD field.

It should go without saying that 4 short test sessions can only tell us so much about what to expect from a 12 hour long endurance race but these early numbers should give us an idea as to who will be driving the cars to watch next weekend at the 12 Hours of Sebring.