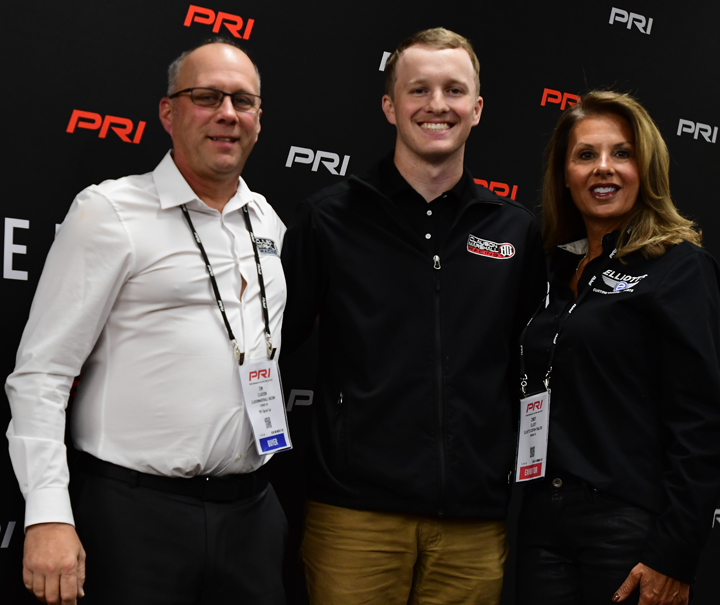 Tim Clauson and Cindy Elliott jointly announced the latest addition to the Clauson-Marshall entry for next month’s Chili Bowl in Tulsa, Oklahoma during the PRI trade show in Indianapolis.

Thanks to the Tony Elliott Foundation’s golf tournament, held in conjunction with the Driven2SaveLives BC39 USAC midget race last September that raised more than $20,000 for the foundation, the team adds Cole Bodine, 20, for the biggest midget race in the country.

Bodine started in quarter-midgets and worked his way to mini-sprints before realizing he needed better backing to enhance his racing career. He went to Clauson-Marshall’s shop and ended up working as a helper, then subbed for an injured driver, impressing Tim Clauson with his skills behind the wheel. As a result, the Tony Elliott Foundation is backing the young man’s efforts for this big race.

The Tony Elliott Foundation’s charitable golf tournament will take place once again next September, held in conjunction with the second Driven2SaveLives BC39 Powered by NOS Energy Drink spectacular. The golf outing is scheduled to take place on Thursday, September 5. The intent, as it was last year, is to benefit young up-and-coming drivers.

The first BC39 race was so successful that the event, held to kick off NASCAR’s Big Machine Vodka 400 at the Brickyard race, is held on a purpose-built dirt track inside Indianapolis Motor Speedway (IMS) and sanctioned by the United States Auto Club (USAC), will be held a second time. Racers definitely enjoyed running on the dirt oval inside the 2.5-mile historic oval and are vying to return again. The first 39-lap feature race was won by two-time USAC National Champion Brady Bacon.