The passion for classic cars, hot rods and race cars, is a universal language, one that crosses borders and barriers of country and culture. It’s been true for some time, but these days with the advent of the internet, television shows, and the wonders of international shipping, that language has translated to a true market need.  No one understands this better than the folks at Classic Industries.

They have recently expanded their outreach to the Spanish speaking markets, domestically and internationally, to make sure that those customers also have access to the parts and accessories for restoring vintage vehicles that Classic is known for. This effort includes increased support in Spanish from tech specialists, sales staff, product specialists and more.

CI is located in Huntington Beach, CA, the heart of the restoration market on the west coast, for both English and Spanish speakers. This location gives the company access to employees who are bilingual and able to work with customers from all over.

“We all love the classic automotive industry,” says Marketing and Public Relations Coordinator Ed Navarro. “And CI recognized the importance of connecting directly with Spanish-speaking consumers, and worked toward providing extensive services for this growing aftermarket audience, as well as Spanish-speaking employees.”

Asked about the impetus for moving actively towards serving the Spanish speaking market, Navarro sites the way social media is connecting people. “CI has been catering to the Spanish speaking audience for some time, and with social media we really saw people from other countries wanting to connect with us. We had questions coming in from multiple markets, and realized that it was an opportunity and allowed us to promote our brand.”

Classic Industries was connecting with new customers not only through social, but through the spanish-speaking media. “Many of the shows we partner with can distribute in Latin American countries dubbed into Spanish,” explains Navarro. “Spanish speaking enthusiasts are seeing these shows (like Car Chasers) and coming up to us at SEMA. So we’re also spreading the message that way.” 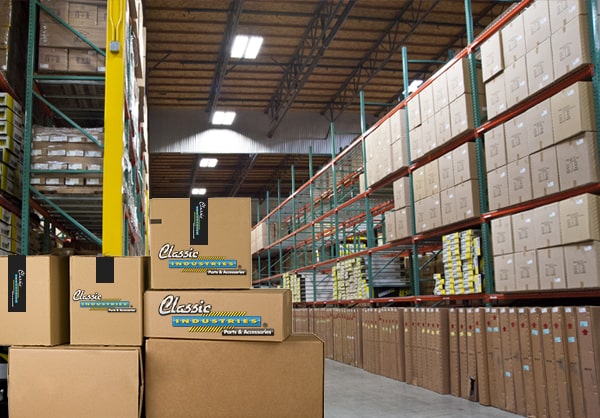 CI brought in a whole force of Spanish speaking reps to make product and service calls better for everyone. “Spanish is the second biggest language used in the world, and having staff who speaks Spanish makes it easier for someone to connect with CI who is speaking Spanish,” Navarro elaborates. “It allows those consumers to communicate what they really need.”

But what about getting customers what they’re looking for?  “Years ago, shipping was less available,” says Navarro. “But now there are international shipping options that didn’t exist before. There is a cost, of course, but before the customer completes the purchase, there’s a cost breakdown of the order and shipping so they know what it’s going to be.”

Navarro also speaks to the cultural and country-wide trends that Classic Industries is seeing, both domestically and internationally.  Southern California, in particular, has always had a low rider tradition, and in recent years, the rat rod has been a prevalent part of the Spanish-speaking hot rod community. But Classic Industries is seeing a move away from those tradition.

“Younger enthusiasts are getting into the muscle car market,” Navarro says. “There are really no boundaries for classic cars. Internationally , GM and Ford vehicles have been available for a long time, so we see a lot of that restoration market. And of course the Chevy truck. However, the Mopar market is growing internationally.  It’s one of our biggest lines now, and it’s growing everywhere.”

The concentrated push into the Spanish-speaking market is a smart move for Classic Industries, a company that has excelled at looking ahead in the market with their product offerings for a long time. They were one of the first companies to offer restoration products for later model classics in the face of rising costs for the trendier projects. That insight has kept them at the forefront of the market.  Active outreach and support for domestic and international Spanish speaking enthusiasts sets a precedent for expansion and customer service that will continue to be important as the auto industry faces the fallout of tariffs and other challenges.

Navarro sums up the efforts. “Being in Southern California means having a bilingual talent pool for this job market. We encourage an open workplace environment to encourage the customer to use their native language. With global sharing technology, this process will be even easier. This is something we will also be promoting at SEMA. Classic Indstries is here to help all enthusiasts, regardless of language and country. The passion for classic autos knows no borders.”