After choosing to hug the bottom line of the 3/8-mile Dirt clay oval racetrack located in Central Minnesota, Clanton was able to charge up to the front from his ninth place starting spot and broke into the top-five by the fifth circuit. Although it would take Clanton until lap 22 to drive underneath the then second-place Brandon Sheppard, by lap 29, he was able to charge past polesitter and race leader Ricky Weiss.

As the Georgia Bulldog continued to lead the way throughout this race, a restart with 15 laps to go led to a battle with a very hungry points leader on the rear bumper of Clanton’s No. 25 Skyline Motorsports ride. Forced to try and outrun the Rocket1 Racing guru, Clanton stuck to his guns on the low side and simply drove away from Sheppard in the closing laps to earn his 44th career World of Outlaws victory and first since Screven Motor Speedway back in early February.

“This was an amazing win,” said Clanton. “I definitely have one of the best teams in the sport, hands down. None of this would be possible, especially defeating Sheppard, without them.” 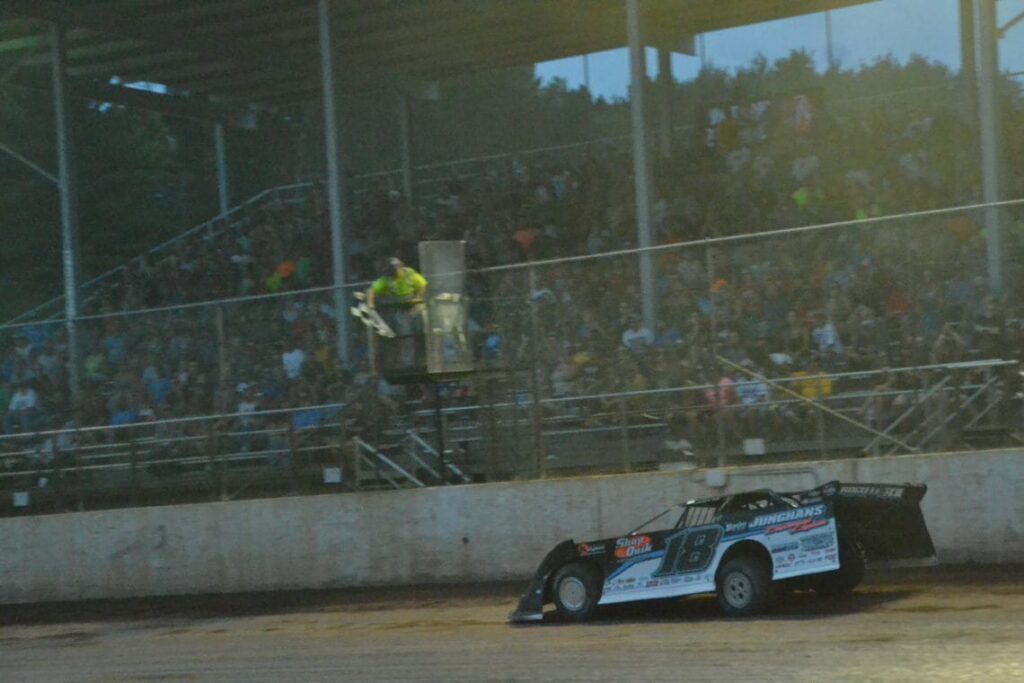 Clanton wasn’t the only driver to take down the hard-charging points leader Sheppard this weekend. As the World of Outlaws Morton Buildings Late Model Series powered into its second state of the dirt track racing weekend, Chase Junghans in the No. 18 powered his way to a race win at Red Cedar Speedway in Menomonie, Wisconsin.

The last time the World of Outlaws Morton Buildings Late Model Series saw Chase Junghans in Victory Lane, a shortage of confetti in the cannon put a minor damper on his glorious moment in the winner’s circle. But after the checkered flag dropped in Sunday’s Series debut at Red Cedar Speedway, Junghans had never been happier to climb atop his ShopQuik Convenience Stores Rocket Chassis to a big confetti shower after driving away from Shane Clanton and Ricky Weiss to pick up his first victory of the season.

Picking up the win in Drydene Heat race number two, Junghans redrew the pole, took the lead from Saturday night’s race winner Shane Clanton on the very first lap and never broke his concentration once throughout Sunday night’s 50-lap feature. After spending almost the entire race on the high side of the 3/8-mile semi-banked oval, not even a late-race caution that re-stacked the field and put 13-time winner Brandon Sheppard on his rear bumper, could shake this driver from his goal of a dominating win.

“Both my car and team were phenomenal tonight and after this performance I know that we are going in the right direction for future wins,” said Junghans. “There is a bunch more that we can do to make my ride even faster, but I am excited to see where we are heading.”

While Sheppard and his Rocket1 Racing team may have fallen short during the two race, two state weekend sweep, the series points leader will have another shot at getting back to the winner’s circle after a 9-day break from competition before the next show at the 1/2-mile Davenport Speedway in Iowa on July 24. Stay tuned to RacingJunk.com for all your World of Outlaws Morton Buildings Late Model Series coverage.