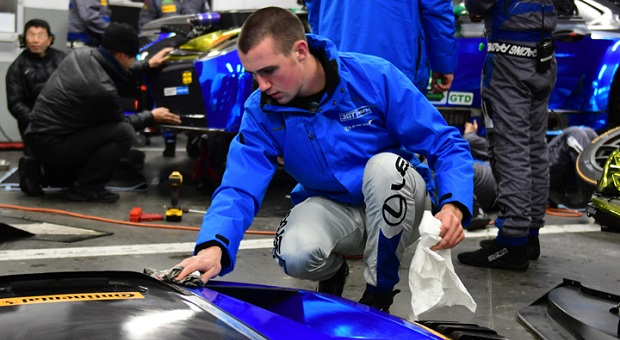 Most professional racecar drivers get top gigs through punishing work from the time they’re children wanting to drive a racing kart, progressing up the ladder thanks to their parents or local backers from their hometowns. Others receive opportunities through their families’ abilities to hoist them to excellent rides; the family could have connections, be involved in the business of motorsports or just have the funding to support their child’s dreams.

Austin Cindric’s rise is due to both sets of circumstances. As the son of Penske Racing’s president Tim Cindric, who followed his own father into the business, albeit from the team management side, Austin has had the kind of opportunities other kids simply don’t get. Thankfully, he hasn’t been spoiled beyond belief along the way.

During the 2017 Rolex 24 at Daytona, where he was driving for 3GT Racing in their debut of the Lexus GTD-class racecar, there were issues that often occur with new racecars the first time out in competition. As the team’s brain trust attempted to work out the problems and get the car back on the track, there was Austin Cindric in the garage, quietly cataloging parts, wiping down pieces of the body to prepare it to get back on-track. Just watching him at 1-2 in the morning told me everything I needed to know about this kid’s character.

Cindric finished third in the 2017 NASCAR Craftsman Truck Series points standings, driving for Brad Keselowski Racing (BKR) – the team owner is a second-generation racer – and called that involvement superb. “Just the experience of making the final four last season and getting to race for the championship at Homestead was truly special for me. But it’s also made me determined to find a way to try and get in that position again.”

To that end, the driver, just 19 years old, will race the entire 33-contest NASCAR XFINITY Series (NXS) in 2018, working with two different organizations, both winning enterprises. Cindric opens the 2018 season on February 17, driving the No. 60 PIRTEK Ford Mustang for Roush Fenway Racing at Daytona International Speedway, the first of nine events he’s contracted to race for Roush Fenway, including four of the first five races on the calendar.

Additionally, the lanky Cindric will drive either the No. 12 or the No. 22 Ford Mustang for Team Penske in the remaining 24 contests, including the four Dash for Cash events at Bristol, Richmond, Talladega and Dover. He’ll be working with three different crew chiefs over the course of the season, which will be an education in itself.

“To have the opportunity to run for a driver’s championship this year in the XFINITY Series with both Team Penske and Roush Fenway Racing is a dream come true,” Cindric said. “I know there’s a lot left for me to learn; that being said, it puts the ball in my court because I have such an incredible and unique opportunity in front of me, to be surrounded by the experience of two very successful organizations. That’s all a driver can ask for.”

Austin Cindric first raced in NXS last year, when he drove the No. 22 Team Penske Ford Mustang at Road America, running inside the top 10 for much of the race. A late-race cut tire, necessitating an unscheduled green-flag pit stop which left him in 16th place at the flags.

Even before the NASCAR season gets underway later this week at Daytona International Speedway, Cindric has already competed in different series, driving widely disparate vehicles: He’s raced in two Rallycross ice races in Sweden and finished sixth overall in the Rolex 24 at Daytona, driving a JDC-Miller Motorsports prototype.

About Anne Proffit 618 Articles
Anne Proffit traces her love of racing - in particular drag racing - to her childhood days in Philadelphia, where Atco Dragway, Englishtown and Maple Grove Raceway were destinations just made for her. As a diversion, she was the first editor of IMSA’s Arrow newsletter, and now writes about and photographs sports cars, Indy cars, Formula 1, MotoGP, NASCAR, Formula Drift, Red Bull Global Rallycross - in addition to her first love of NHRA drag racing. A specialty is a particular admiration for the people that build and tune drag racing engines.