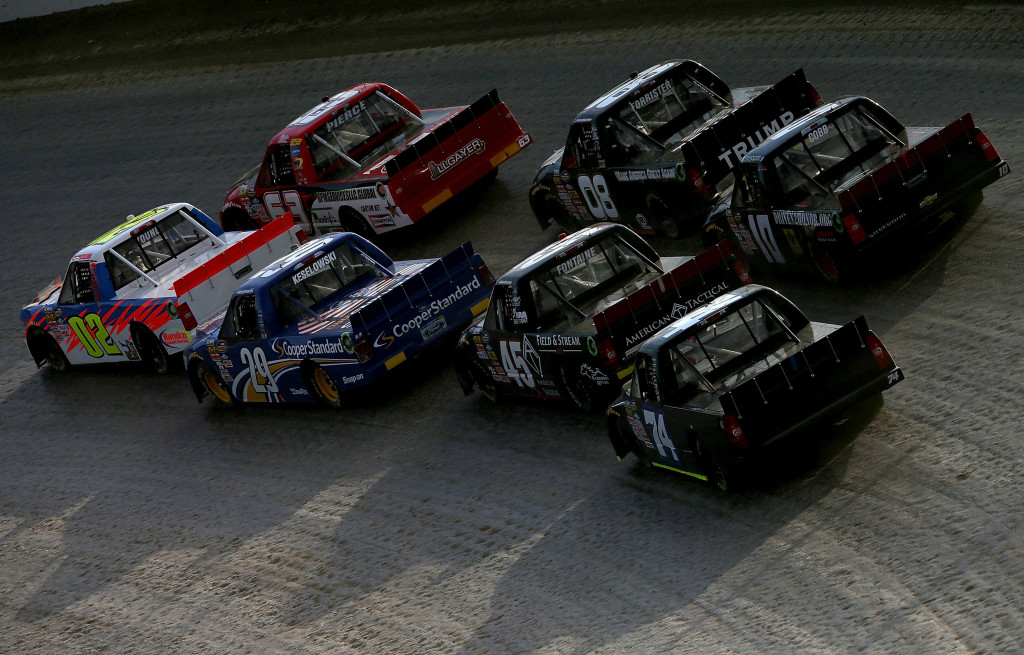 NASCAR returned to its dirt track racing roots Wednesday night for the 1-800-CarCrash MudSummer Classic at Tony Stewart’s beautiful Eldora Speedway with a conglomeration of NASCAR regulars, past champions, and dirt track aces competing in the 150-lap mud-slinging event.

In qualifying, a surprise name rose to the top when 18-year-old dirt track specialist Bobby Pierce turned the quickest time trials and earned a prime spot for his 10-lap heat race in his first truck event.

That momentum carried forward as Pierce earned the pole after winning his heat race, out-dueling the likes of Brad Keselowski.  The other four qualifying heats were won by John Hunter Nemecheck, who slipped by notables Johnny Sauter and champ, Matt Crafton to earn the outside pole.  The third heat race showed that Kenny Schrader hadn’t lost his touch by putting on a perfect slide job down the frontstretch to eclipse Timothy Peters, riding the cushion in earning his starting position of third.  The fourth was easily taken by Christopher Bell, and in the fifth and final race, truck point contender Tyler Reddick survived a hard hit to the wall and made his way back to the front to take the fifth seed.

The last chance race only took the top two with Cody Erickson and Ben Kennedy racing their way into the show.

At the green flag to start the race, Pierce jockeyed for position with Nemecheck early before moving ahead, pacing the field.  On lap 42, Christopher Bell moved from his fourth starting position, passing Pierce, and set sail until the first competition yellow on lap 60.

Keselowski used this moment to stay out, taking over the lead for track position.  It didn’t take Bell long to make work of Keselowski, passing him on the green flag lap, and from there, survive numerous caution periods. 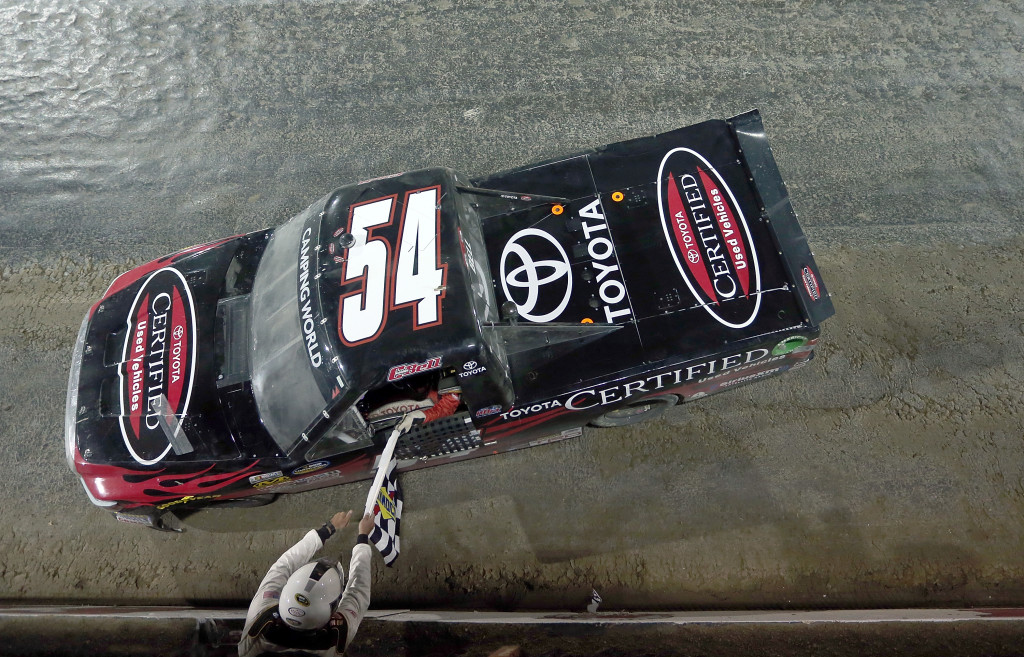 Through the race’s then-longest green flag stretch, Bell increased his lead on pierce, but when Chris Fontaine spun on Lap 94, it once again bunched up the field.

On the restart, Pierce attacked Bell and stole the lead on the backstretch, keeping the lead through a yellow for John Wes Townley on Lap 94.  Bell slid in front of Pierce two laps after the restart and held the point until the end of segment two for the second competition caution of the night.

In the 40-lap race, Bell, showcasing his dirt track skills, checked out on the field and held the lead until the 11th caution flag waved for Timothy Peters’ spin.

On the restart, Bell and Pierce had been battling hard for the lead at the top of the track lap after lap.  In the torrent struggle, Pierce slammed the wall hard enough to dislodge his decklid, but he continued on.

Restarting the race with five laps to go, Bell was able to get a great jump on the field to pull away with the lead until Korbin Forrister spun, bringing out the last yellow and setting up a Green-White-Checker finish.

On the final restart of the night, Bell got another great jump as Pierce struggled on the bottom lane.  As Pierce was forced to battle with Austin and Ty Dillon, Tyler Reddick, and Matt Crafton, Bell was able to create a gap and earn his first NASCAR victory.

“It’s just unbelievable.  I’ve been coming here quite a few times,” said the 20-year-old Bell, winning for Kyle Busch Motorsports.  “If you would have told me two years ago that my first win at Eldora would be in a truck, I would’ve told you you were crazy.

“I’ll tell you what, that’s pretty awesome me and Bobby could come here and run 1-2,” Bell said of his hard battles with Pierce throughout the night.  “I never heard of him until I was at a sprint car race last year and he was running his late model.  It’s cool a couple of dirt guys can run 1-2 at a dirt racetrack.” 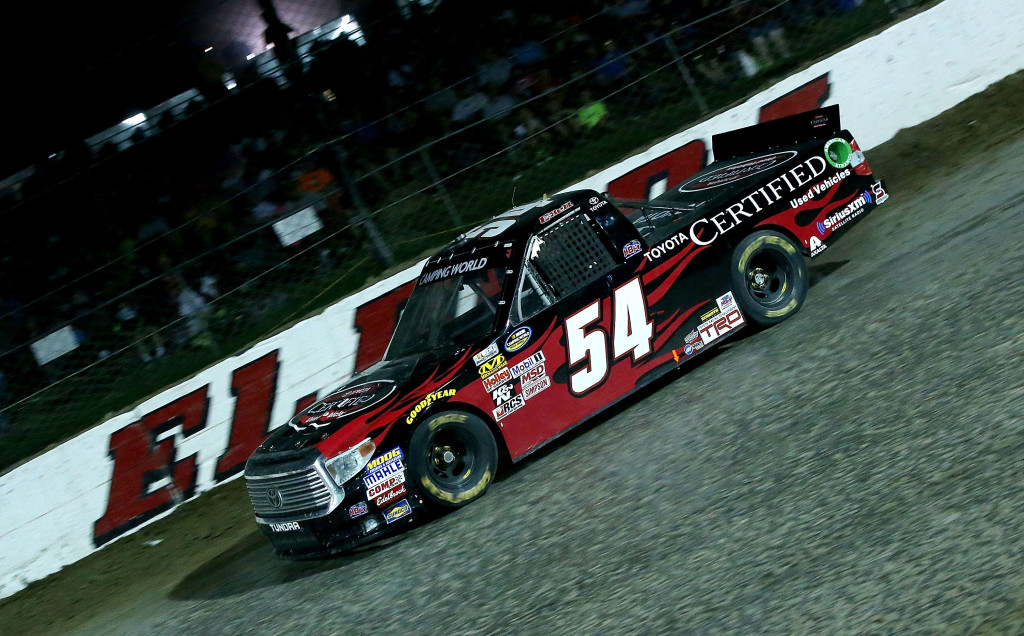 Runner-up Pierce said, “Oh, it was awesome, I didn’t want to be the guy in second, but that’s just how it goes.  I was hoping I could get him back on that last run there, but Bell did a great job there, everything right to win the race.”

There were a record 16 caution flags for 61 laps, slowing the pace to 44.602 mph and nine lead changes were had among four drivers.

The NASCAR Camping World Truck Series now heads to the Pocono Raceway for the Pocono Mountains 150 on Saturday, August 1 with a 1 p.m. start on FOX Sports 1. 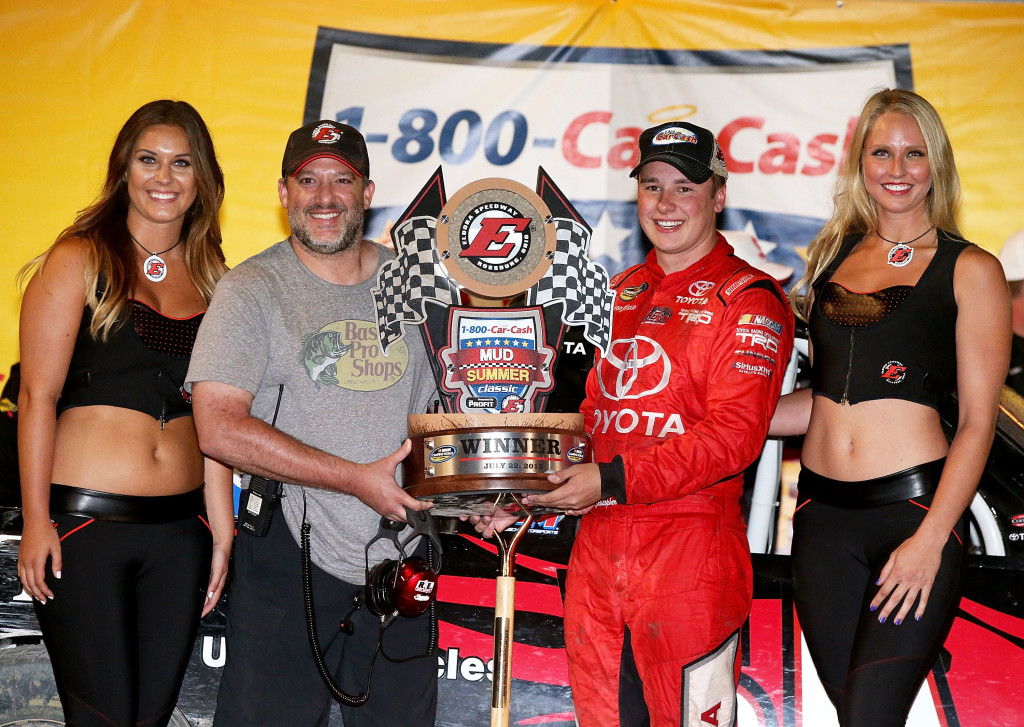