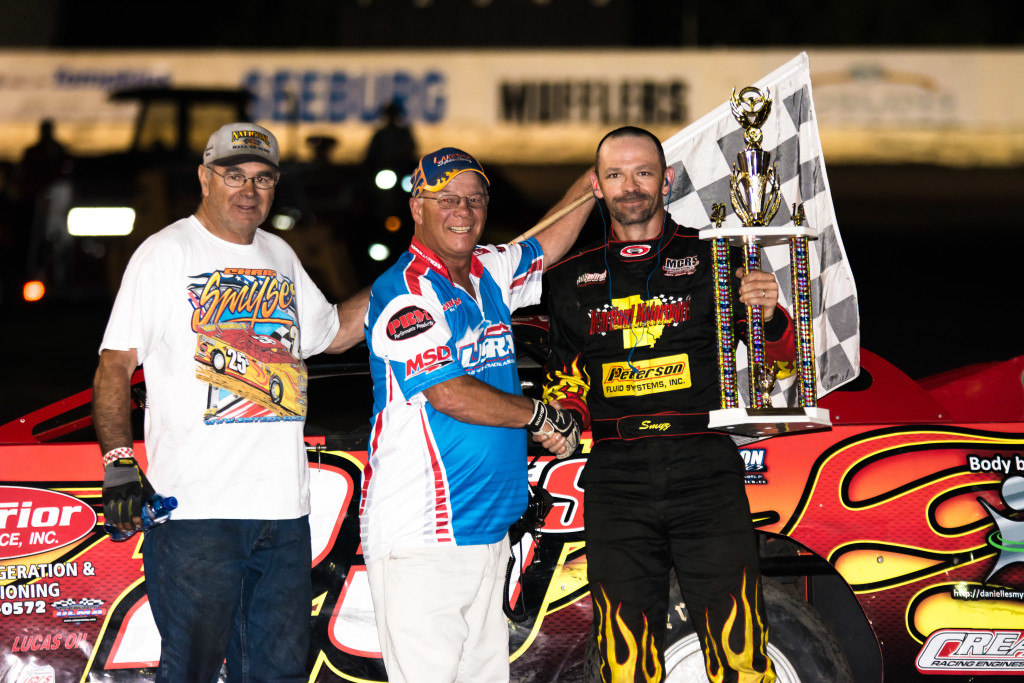 The final two events were unfortunately weathered out on Saturday and Sunday at Randolph County Raceway and Central Missouri Speedway. In a vote of participating drivers and by final approval of the ULMA Board of Directors, it was decided to end the shootout after the two completed events. The underlying factor being the shootout is a heat-of-the-moment type event that is scheduled for consecutive days. To drag it out over an extended period of days would not remain true to the intent of the weekend of competition.

Smyser kicked off his winning weekend with his first-ever trip to victory lane at Lakeside Speedway during a special Thursday evening program. A total of 23 cars checked in to the ‘Diamond of Dirt Tracks’ for three action-packed heat races with Vance Wilson, track point’s leader Aaron Marrant, and Smyser taking the preliminary wins.

Smyser started on the pole with Marrant to his outside and it appeared from the early laps it was going to be a showdown between these two drivers, who battled lap-after-lap for the top spot. Bobby Penney maintained his third position all throughout the race as Jason Bodenhamer and David Melloway advanced through the field to make their way towards the front. 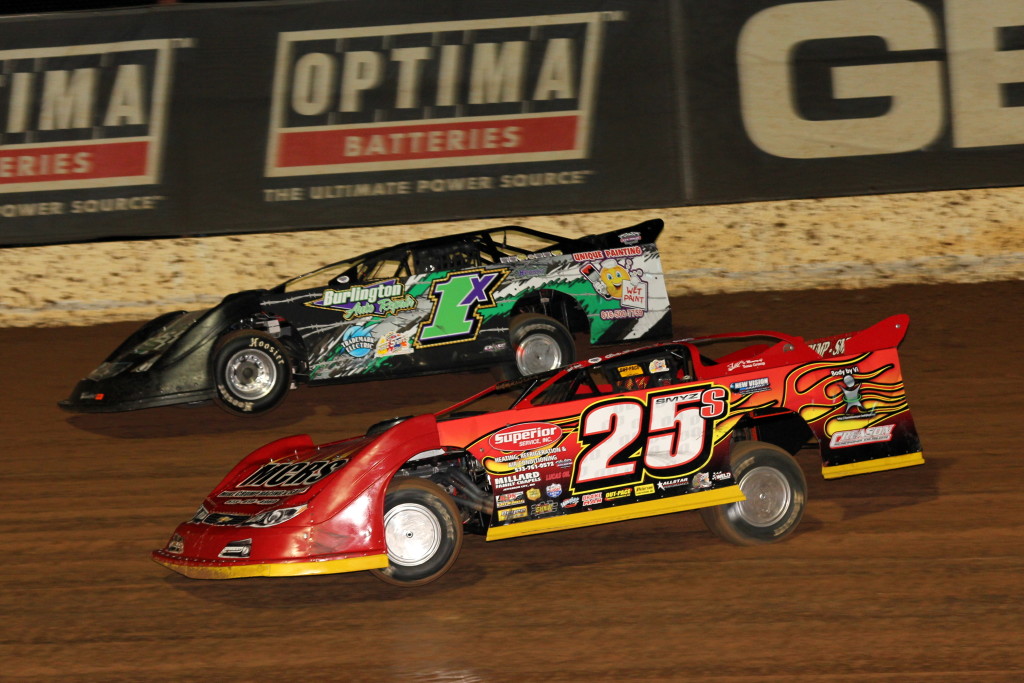 Through the race’s closing laps, Marrant tried valiantly to find a way around Smyser as he weaved his way in and out of lapped traffic; however, on this night it was Smyser who came away with the win followed by Marrant. Penney started and finished a solid third while Bodenhamer claimed seven spots to come away in fourth with last week’s winner Johnny Fennewald rounding out the top five. Jon Binning, Larry Ferris, former track champion Tommy Cordray, twentieth-starting David Mellloway and Arkansas driver Kanyan Methvin completed the top ten.

According to the track’s latest press release, weekly championship racing including ULMA Late Models returns again this Saturday as gates open at 5 p.m. with hot laps at 7 and racing at 7:30 p.m. Admission prices are: Adults (16 and up) $12, Seniors (62 and up)/Military $9, Youth (15 and under) Free, Family Pass $25 (click here for details). Pit Pass $25. To purchase tickets or to inquire about the availability of suites for Saturday or other upcoming races, contact admissions director Nichole McMillan at (417) 282-5984 or via email at [email protected] The track may be found online at www.lucasoilspeedway.com.

Last Friday at Lakeside Speedway in Kansas City, 16 cars participated in the night’s events in front of a large crowd. The Lucas Cattle Company ULMA Late Models were on hand as guest class for their Jake Williams Memorial Triple Crown Shootout presented by RacinDIrt.com for a pair of heat races and their 15-lap feature. Bobby Penney prevailed in heat race one over Chris Smyser and Ryan Petersheim while previous ULMA winner Aaron Marrant took control of heat two ahead of Kenny Mudd and Ethan Young.

For their Shootout main event and for the second-consecutive night, Smyser and Marrant started the race on the front row with Mudd and Penney just behind. Smyser shot out to an early race lead over Marrant. An early caution period slowed the field as David Melloway’s car smashed the back-stretch wall in a single-car incident. When the race resumed, Smyser set a blistering pace out front. Surprisingly, Marrant’s night came to a premature end when he retired to the pits leaving Kenny Mudd and Bobby Penney to battle behind him.

Several green flag laps were completed before a second quick caution formed a single-file restart over the field. Sixth-starting Jason Bodenhamer methodically made his way towards the front of the field through the races later stages and set himself up for one final bid at the win in the race’s final laps. With the field slowed one final time for a green, white, and checkered flag finish, Smyser led the field for the restart. Bodenhamer found some grip on the low side as he powered his #2b into the second spot ahead of Mudd.

In the end, no one had anything for Lancaster, Missouri’s Smyser as he powered his way to his second-consecutive ULMA win of the weekend. Bodenhamer finished the night in second followed by Mudd in third. Dustin Hodges rebounded from recent mechanical gremlins for a strong run from ninth on the grid to fourth while Bobby Penney of Lawson, Missouri finished in fifth.

This weekend’s action gets underway on Friday at Callaway Raceway, gates open at 5 with hot laps at 7 and racing at 7:30. The track is located at 7419 County Road 405, Fulton, MO. For additional information call (573) 592-7795 or (573) 642-6580 or visit www.callawayraceways.com. As previously mentioned, Saturday racing moves to Lucas Oil Speedway to complete the two point’s earning opportunities this weekend.

The cutoff to determine the 16 drivers who will compete in two 8-car heat races and the 16-car, 15-lap main event during the 2016 edition of the Missouri State Fair is fast-approaching. The previous ULMA champions were all invited to take the first guaranteed participating driver positions as part of the non-point’s earning ULMA Invitational event. So far, past champions who have committed to the race are, Jason Bodenhamer, Kevin Kaiser, Vance Wilson, Jason Russell, Jon Binning, and Jon Melloway. ULMA will fill the remaining ten eligibility spots using the ULMA Championship point standings as of the conclusion of the weekend of July 16th events. ULMA will start at the top and work its way down the standings until 10 remaining drivers commit to the event. The 16-car starting field is by request of the event promoter.

ULMA has decided to order one more pressing of the special 10-year anniversary shirts. Shirts come in a variety of sizes from youth to 5XL in white, green, and pink. Anyone wishing to order a shirt needs to email their shirt sizes and colors to [email protected] no later than noon on Monday, July 11th. Payment is due upon delivery of shirts. Cost is $15 for youth to 1XLg, $18 for 2XLgt or larger.

For a printable schedule and copies of the association’s rules and regulations, visit www.ulmaracing.com. During the race season, the association is also active on its Facebook page at www.facebook.com/ULMA-United-Late-Model-Association. ULMA’s outstanding group of season sponsors includes Lucas Cattle Company, Hoosier Tire Midwest, Radical Race Wear, FastShafts.com, RacingJunk.com, RacinDirt.com, and Photographics by Shelly Payne.