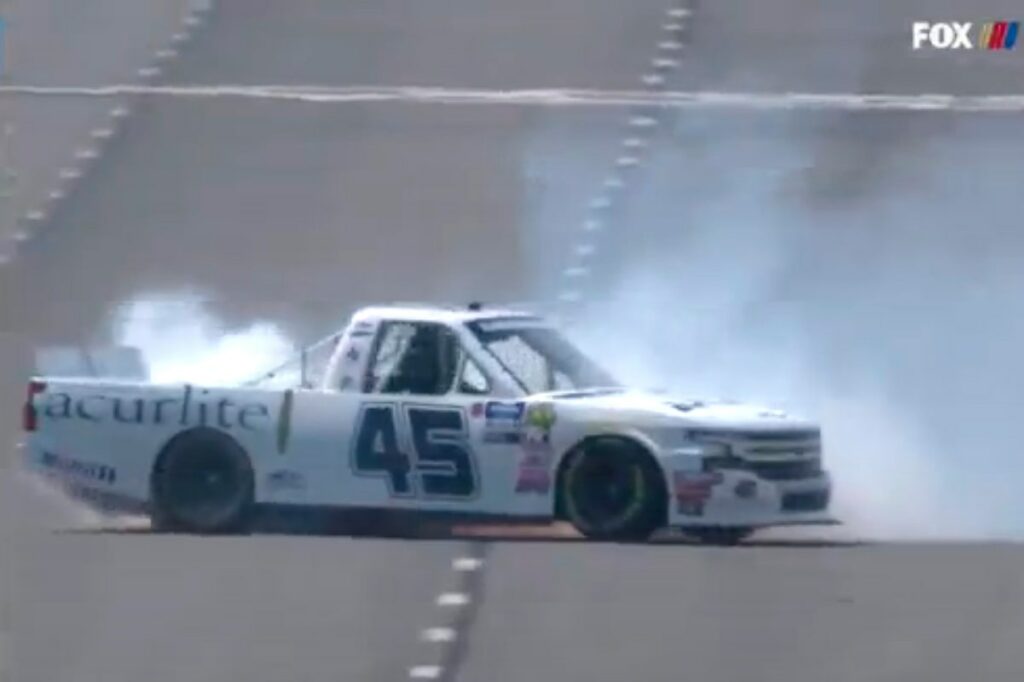 Saturday afternoon’s NASCAR Gander Outdoor Truck Series Gander RV 150 on Pocono’s Tricky Triangle needed about 15 minutes and double digits on the lap counter to complete a full lap under green flag conditions. Two times the green flag waved and two times a single truck spun on the front stretch. Third time’s the charm, as the saying goes, and things calmed down enough for laps to be ticked off under green. 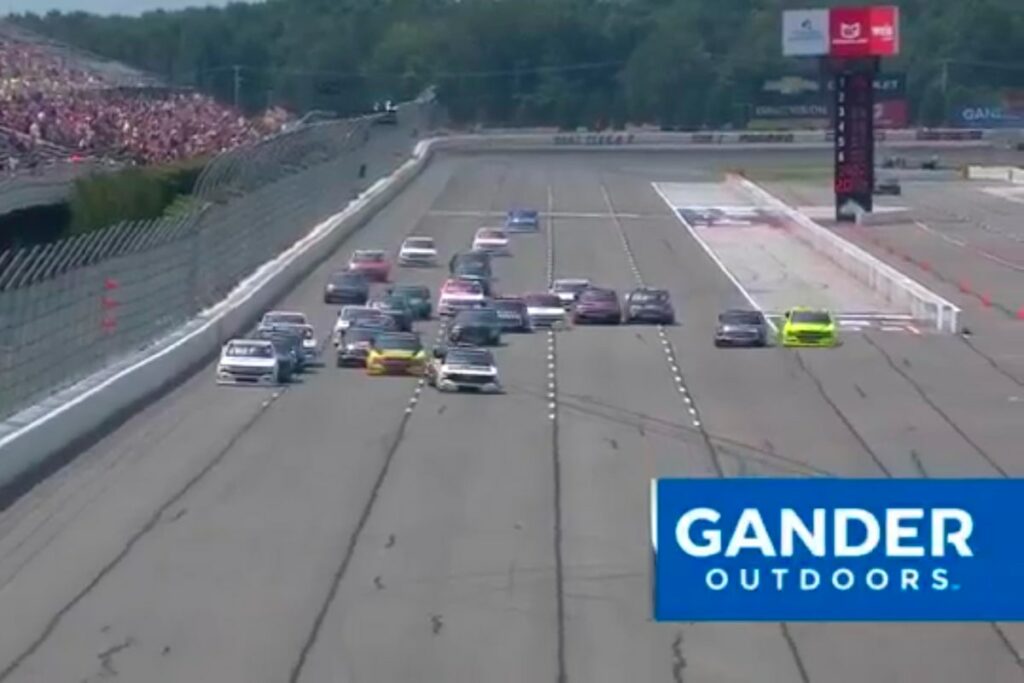 Ross Chastain won Stage 1, after which drivers again threw caution to the wind and went wall to wall on the restart. The Number 2 of Sheldon Creed hit the wall pretty hard in the melee but didn’t bring out a caution thanks to a great save. Harrison Burton upped his game to take the Stage 2 win. Ross Chastain came roaring back in the final stage for the win in his Niece Motorsports Number 45, giving him three wins on the season (two of which count towards qualifying for the Chase) and bumping him solidly into the Top 20 in points. Tyler Ankrum followed up last week’s great performance with a second place finish and Burton held on for third place. 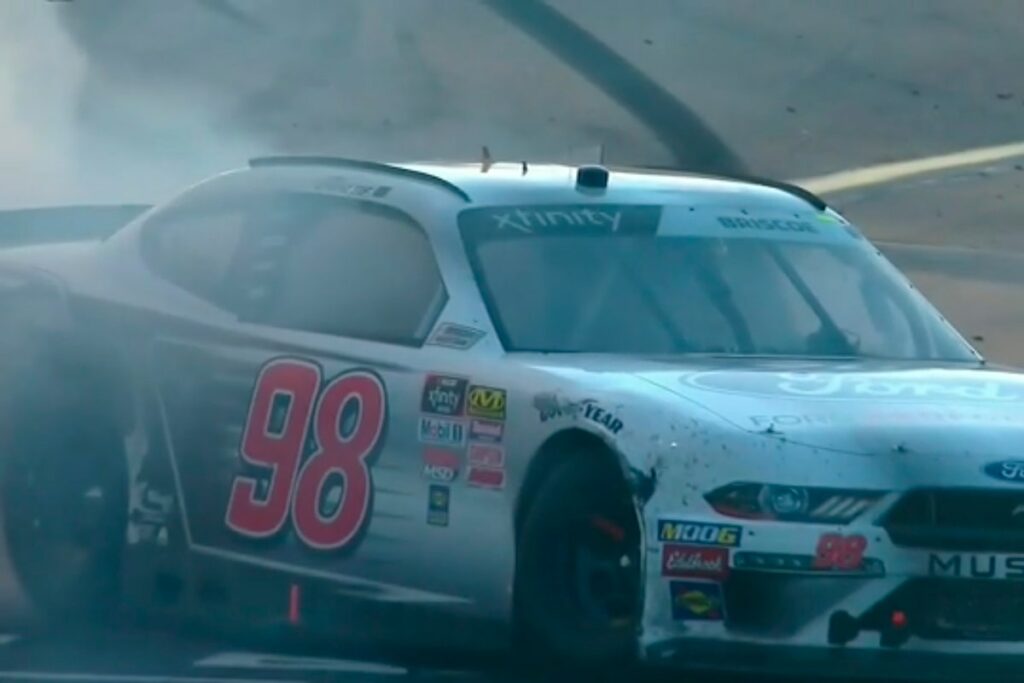 Saturday’s second race, the NASCAR XFINITY Series U.S. Cellular 250, started out looking like the truck race, with drivers fanning out four wide as they passed the Start-Finish line on the drop of the green. Then Christopher rang the Bell and grabbed everyone’s attention, winning Stages 1 and 2 in dominating fashion. Bell may have been putting folks to sleep with his dominating performance but the rest of the field more than made up for it with bumping and banging, tradin’ paint, and all around great racing from the drop of the green to the waving of the checkered flag.

Briscoe had a great fight with Cole Custer behind Bell for second late in the race, after which he went on to chase down Bell. As often happens, pit strategy was the difference: Briscoe pitted late for tires and Bell didn’t. The rookie drove his Stewart-Haas Racing Number 98 by Bell and held on for the final six laps for his first career XFINITY win. Bell took second and John Hunter Nemechek overtook Custer for third. 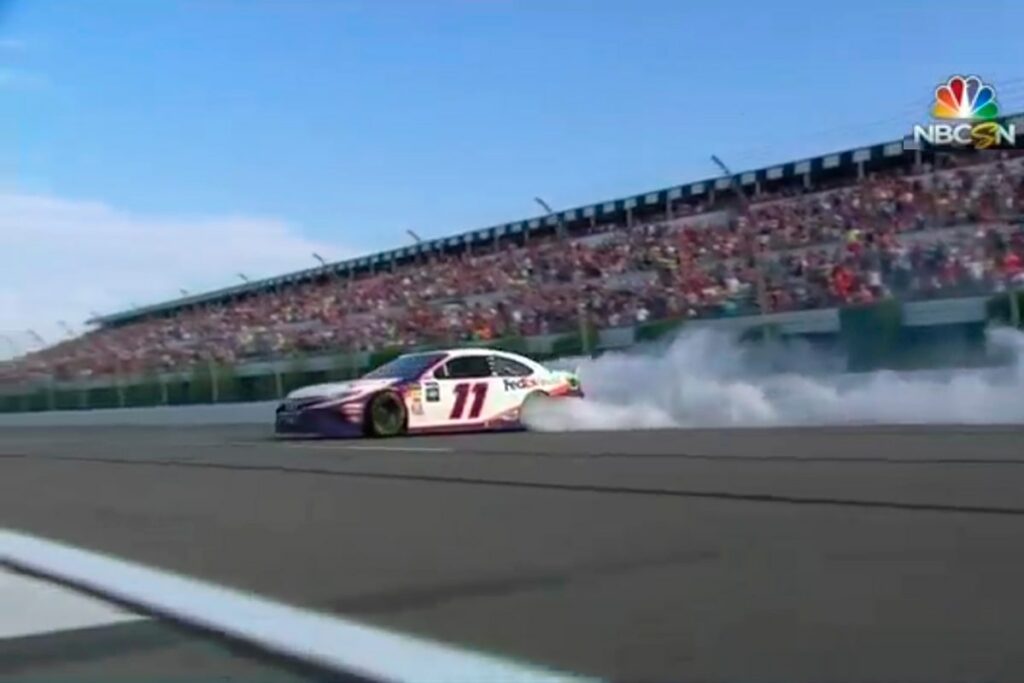 In Sunday’s Monster Energy NASCAR Cup Series Gander RV 400 at Pocono, Denny Hamlin required overtime to win a race that ended up hinging on fuel mileage. It became obvious that many crew chiefs thought it would come down to fuel mileage, as many were heard on the radio late in Stage 1 and through Stage 2 telling their drivers to “Save fuel! Save fuel!”

Jimmie Johnson and the Hendrick Motorsports Number 48 was the only one to mess up an otherwise perfect night for Joe Gibbs Racing by winning Stage 2. Kyle Busch took his Number 18 to the Stage 1 win. Denny Hamlin and the Number 11 topped an all JGR podium with Erik Jones and the Number 20 coming in second and Martin Truex, Jr. and the Number 19 crossing in third.