Women love to hear those three little words (and men do too, obviously).

And then there’s the three words NASCAR fans love to utter when it comes to changes from the sanctioning body: “It’s about time!”

Such was the case this week when NASCAR announced it will implement a playoff format similar to the Chase for the Sprint Cup into its two junior racing leagues, the Xfinity Series and Camping World Truck Series.

Yes, everyone repeat after me in unison: “It’s about time!”

That is not a criticism of NASCAR. Rather, it’s an expression of finally seeing the realization of hopes that many fans have expressed in recent years.

While many of those same fans say they oftentimes see better and more exciting racing action in the Xfinity and Truck series, much of that excitement is tempered by the fact that there was no playoff system to go along with it.

Granted, the last couple of seasons in particular, the action in both the Xfinity and Truck series in the last, say, six or seven races of the season has been nothing short of outstanding. We’ve seen some very close racing action and, even more, nail-biting finishes to determine the final champion in each respective series.

For whatever reason, NASCAR had previously felt that a playoff system wasn’t necessary in the two junior leagues. One frame of mind was to keep them different from the Sprint Cup Chase.

Another frame of mind may have been that since they are developmental leagues, they don’t necessarily need their own playoffs.

But that thinking has obviously changed and, as a result, we now will have modified playoff formats in both series.

Kudos to you, NASCAR.

I admit there are still a number of holdouts that, even after 12 years of the Chase, are still not in favor of it. Many feel it offers an artificial playoff and, ergo, artificial excitement.

I’m sure some people will feel the same way about the Xfinity and Truck series adopting a playoff format now. But if those same critics would have an open mind, they might realize the reason why NASCAR chose to go in such a direction.

It’s not about money, if you’re thinking that.

Rather, it’s to offer up a system that will enhance the overall popularity and excitement for both series as they come down to crowing a champion.

Face it, when you attended in-person or watched some of the final races of the season in both the Xfinity and Truck series last year or the year before, while the standings were tight and one point could potentially make a difference between who becomes champion and who doesn’t, one thing was glaringly missing:

I can’t count the number of racetracks that struggled to draw fans to those races in the latter parts of the season – even though bonafide championship battles were the order of the day each and every time the green flag would fall. 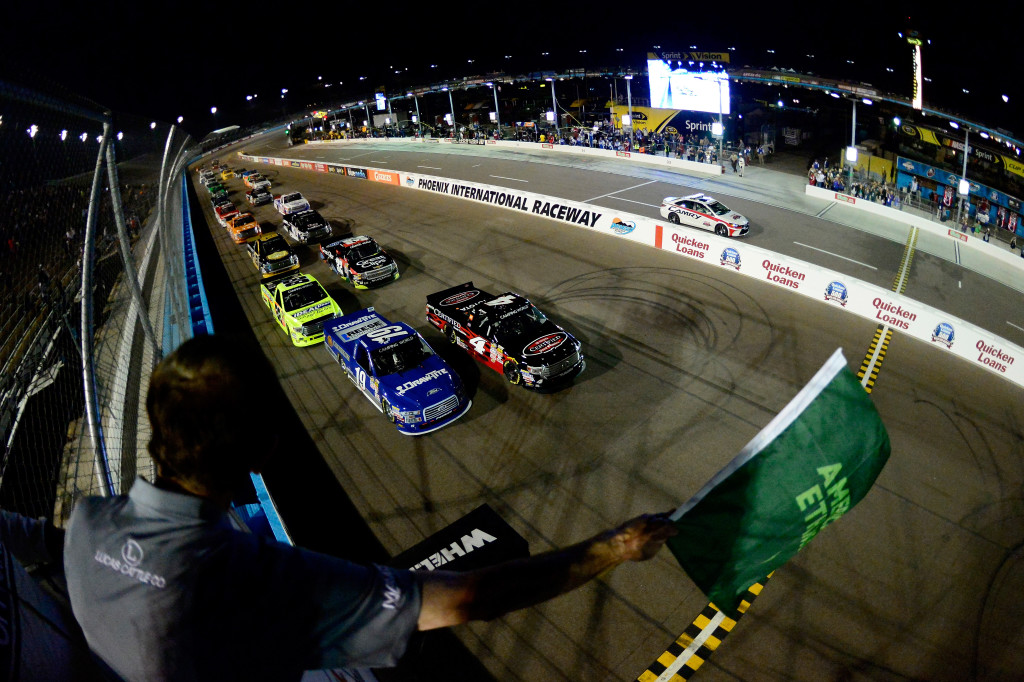 Now, with a modified playoff system that is based upon the Chase, but adapted more specifically for the two junior series, race fans will start to hopefully feel some of the excitement that the Chase has generated – particularly in the last two years with its new format that was implemented in 2014.

Admittedly, it will take a while for fans to potentially get used to the Xfinity and Truck playoff formats. It’s new, and whenever something new is introduced in NASCAR, it typically takes time for some fans to warm to it.

But I’ll say this, based upon many of the comments from Xfinity and Truck drivers since the new formats were announced, they not only are pumped and excited, they realize that there’s the potential to draw many more fans into the stands or in front of their TVs.

As a result, that will lessen the chance of those same drivers having to continue to wallow in some semblance of relative obscurity – even in the most exciting time of their respective seasons – due to the more popular Chase format that exists in NASCAR’s major league.

I’ve been a student and fan of both the Xfinity and Truck series for probably at least the last 15 seasons. I recall early in the new century where there was considerable talk of potentially doing away with one or both series.

Thankfully, NASCAR chose not to go in that direction.

And now, finally, we’ll hopefully be able to lift the exposure, excitement and outreach of the Xfinity and Truck series and give them the attention – particularly in the most crucial part of their respective seasons – that they’re both long overdue of having.

1 Comment on Chase-style Format for NASCAR Xfinity, Trucks Series is a Great Idea