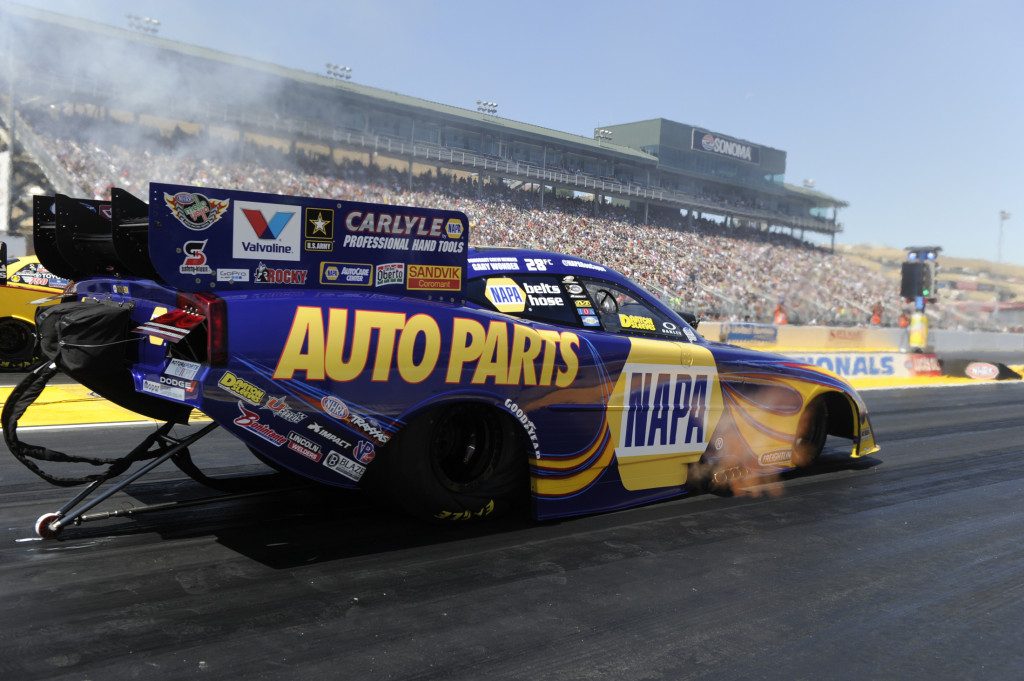 In his 20th season of NHRA Drag Racing, Ron Capps drives into 2014 with the same sure-minded passion he’s exhibited for the last 10 years with the Don Schumacher Racing NAPA Dodge team.

He knows the game of NHRA Mello Yello Drag Racing and despite never winning a formal championship,  the radiance he shows on and off the track is undiminished.

So that leads to the proverbial question: What does Ron Capps need to do to win his first Funny Car championship?  The Vista, Calif. resident has been runner-up in the Funny Car standings four times: 1998, 2000, 2005, and 2012.

“You know, it’s funny now because in this era of the playoff-style atmosphere that we have been going through the NHRA with the Countdown and of course, NASCAR with their Chase, we’ve seen the changes to the format, trying to improve, just different scenarios of trying to make excitement for the fans and winning a championship has sort of really become ‘Who has the hot car for the last four or five races,’” said Capps.

“It actually has taken a little bit of the shine off of winning a championship, because obviously, back then you had to do all year long.  You had to start off hot and had to sustain that and if you slowed a little bit, you couldn’t struggle for very long.  We used to see John Force dominate and wrap up a championship early.”

His fan appeal increases every year, and Capps remains a spokesman for always making the sport better for the fans. It’s that fan support  that keeps Capps motivated to win his first title.

“You get the support of the media and fans saying things like ‘you’re due to win’ or ‘does it hurt to have so many runner-ups?” said Capps.  “I consider myself so lucky to be in a spot where I could be even No. 2 at times.  As bad as I want to win not to say that I’m okay with it, but there are a lot of drivers would almost jokingly give away a limb to have a chance to wake up Sunday morning at Pomona in November and have a chance that day of winning a championship.

“I’ve been there several times and it’s a great feeling.  I can’t change anything to try and win a championship.  I don’t think (crew chief Rahn) Tobler, none of the team guys can do anything different and I feel it just has to happen.  I’ve been hot at the beginning of the year; I’ve seen our team be hot at the end of the year. It’s a strange thing now that the regular season becomes less important.

“You’re trying to win more for your sponsor during the regular season because the points will come with it and gets you in the Countdown.  There’s really not much doing in the regular season other than trying to win races.  On that side note, which would be a great thing for NHRA to do is to make winning races during the regular season a much better thing for the Countdown, where it adds points and can move you up quicker in the championship.  To answer your question, you got to make sure you have your act together at the U.S. Nationals; race that race because right after that race the Countdown starts and you better have your ducks lined up in a row.

The 41-time Funny Car winner and his NAPA Dodge team have taken a positive stride forward in 2014. In preseason testing, he led the two-day sessions with the quickest elapsed time of the weekend at 4.003 seconds.

“That’s always nice to get a good start,” said a relaxed Capps. “You spend most of your off season thinking of ways to get better than you did before.  You’re building new little trick parts, developing new little gadgets, things to make you better.

“Then everybody gets to Palm Beach for testing and usually you’re too good at the beginning and everyone is smoking the tires.  It was different this year.  A cold front came in and we saw conditions we only see at places like Reading, Pa., where records are set.  Yeah, it was very cold, but our team did a great job.  We tested what we wanted to test and got that out of the way earlier in the week.  On the weekend, Tobler said we’re putting our game face on, the one we’re going to put on at Pomona in a couple of weeks.  It was ‘let’s get ready to race’ and we came out with a 4.04 and later that night with a 4.00 on Friday.”

Sensing they would be satisfied with their previous runs and on Saturday work on repeating the consistency in his race car, this determined bunch of drag racers wanted more and went for it.

“Saturday was ‘let’s run 3.95’,” laughed Capps.  “Let’s go quicker than we’ve ever gone before.  Let’s make this the quickest run ever.  Tobler surely wanted to make a statement on Saturday and unfortunately, the track wouldn’t hold it.

“To be honest with you, I admire their effort and after Friday’s runs, even if we had run a 4.01 on Saturday, it would have been a little disappointing since we were trying to go quicker.  Rahn told me before the run on Saturday morning that we were getting after it and see what kind of statement we could make.  We were pushing it pretty hard.”

That hard driving style reflects on his personal life as well.  He had a love for live rock ‘n roll music and that is something that has propelled this driver from Backstage to the Winner’s Circle on more than a few occasions.

“Every year, I try to line up the NHRA schedule first of all with what is going on with the NASCAR team and my new NAPA teammate, Chase Elliott, on Dale Jr.’s Nationwide team,” said Capps.  “I try to figure out schedule-wise where either I can get them to a NHRA race, or more importantly, me get to one of their races and hang out with the team.

“At the same time I sit down and figure out who’s playing where and try to get a hold of someone I know and work it out where I can go see the concert.

“The last few years, every time I would get to a concert prior to a race, I’d end up winning the race that weekend.  Before the Charlotte race before the Countdown two years ago, I went to Atlanta for a festival starring Shine Down and bunch of other bands and then the next day, I won the race.  Then the next year at Atlanta, I won after going to see Seether and Nickelback the night before for my first time at Atlanta Dragway

“Then it became a fun kind of trend and as everyone knows I love going to see live music and it’s my favorite fun passion.  So when I can mix it in with a race weekend I do and the one thing I especially love to do is taking care of my crew guys.  They give me the best hot rod in the world.  Taking them backstage at a rock show to meet the band, is so cool, just so they can enjoy the time since they work so hard. “

Bringing bands to the track is something Capps has been doing for years with friends help and the look of some of rock’s biggest names and their faces of astonishment at the sound of 8,000 horsepower taking off is something Capps will never forget.

“It’s like that every time,” said Capps. “I just tweeted the photo last week of when the Scorpions came to Denver on Throwback Thursday.  All the rock guys, as big as they are, the most impressive thing you can do is to take them to an NHRA race and down to the starting line.  Because they love the feeling of everything that it brings.  The roar, the shaking, the vibration, the excitement, it’s everything they are use to.  For someone like a big rock star who is used to playing in front of thousands of people on stage, you really need to show’em something to impress them.  It never fails.  It blows them away when you take them to a drag race.  They always tell me, it’s one of their favorite things to stand up there.  It’s always been a pleasure to bring someone that you admire up there and it’s like going backstage for us. It’s where all the action is.” 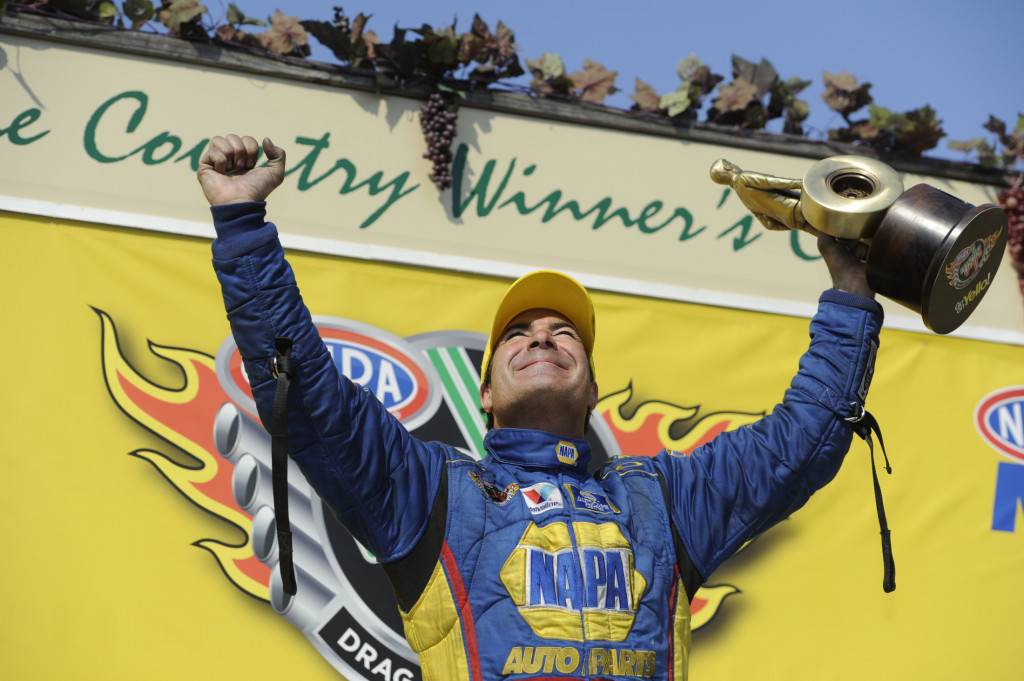