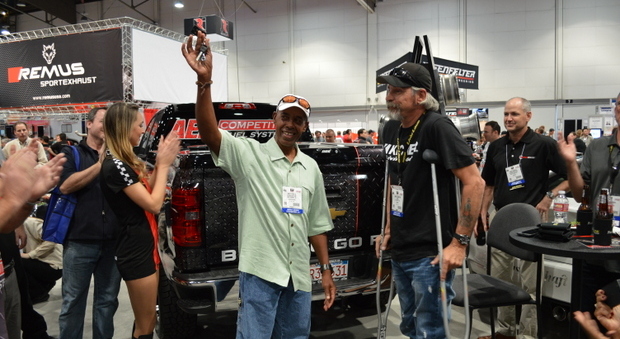 It was an exciting moment for everyone in the midst of an already exciting SEMA show – grand prize winner Van T. Free III accepted the keys to the AED Performance/RacingJunk.com 2014 Chevrolet Silverado grand prize from Jerry “Monza” Johnston, star of the television show “Street Outlaws.”   Mr. Free, Montgomery, Ala., traveled to SEMA with his wife as part of the prize, which celebrated the 15th anniversary of RacingJunk.com.  The reception was held at the Weld Racing booth, #24957, where the truck has been on display for the show, and was a way for not only the partners in the truck giveaway to meet the excited winner, but also to see firsthand what their contributions were a part of.

The 4 x4 extended cab Silverado has been modified with aftermarket components, including Mickey Thompson tires, WELD Racing wheels,  a Magnuson supercharger installed by JHR Performance,  an ARE Tonneau Cover, a Dupli-Color Bed Armour system, Magnaflow Exhaust system, and a lift kit from Rough Country Suspension Systems.  Installation work for part of the truck was done by Crawford’s Service in Pittsfield, Mass. It traveled around the country as part of the giveaway contest, appearing at the Charlotte Auto Fair, the Hot Rod Power Tour, the NASCAR Coke 600, NHRA 4-Wide Nationals, the Knoxville Nationals, and other events.  The truck makes its final stop at SEMA, where it will appear as part of the new SEMA Ignited after show event before going to Alabama.

“It started as just an idea between Trey Dotson (of AED) and I,” said Rob Adams, VP of Sales and Marketing for North Adams, Mass. based RacingJunk.com. “We got the truck and then brought all of these wonderful partners on board, including WELD Racing, who provided these wheels that we saw debut at last year’s SEMA show. It grew from there and we couldn’t be happier to hand the finished product over to Van and his wife.”

The trip to SEMA acts as a sort of second honeymoon for Van and his wife. They were married in Las Vegas 25 years ago, and the bonus of the trip on top of the truck win made the whole thing sweeter for all of the involved partners who contributed to the build.

“This giveaway is part of our effort to give back to the motorsports community that has supported both RacingJunk.com and AED Performance over the years,” says Adams.  “Our customers are the heart of the industry, and we wanted to celebrate them by giving them a chance to win a truly one-of-a-kind truck.”

“Like RacingJunk.com, AED Performance has long been a supporter of the motorsports community, as well as a strong supporter of RacingJunk.com itself,” says Trey Dotson, director of sales and marketing for AED. “We were excited to help celebrate their fifteenth anniversary by partnering with them on one of the best giveaways in motorsports history.”