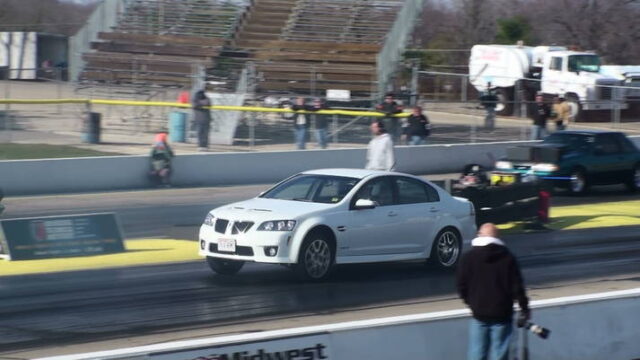 Joe Morgan’s 2009 Pontiac G8 GXP took home Best in Category for the RJ Virtual Car Show last month and it’s easy to see why. Joe’s modern Pontiac isn’t some trailer queen, Joe races this bad boy often, just like the good lord intended.  We reached out to Joe so he can tell us a little more about him and his ride.

I have been a car guy my whole life. A lot of my baby pictures are in and around cars, playing with toy cars, or with car magazines. My dad did a great job of getting me started young. 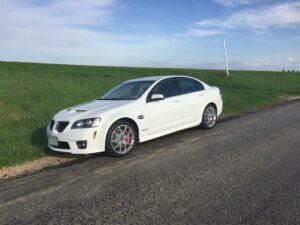 I couldn’t wait to get my driver’s license so I could start driving and racing cars. The two things happened at nearly the same time ironically. I made my first trip to a drag strip about 30 years ago, and I knew I was hooked. I have lost track of exactly how many passes I have made down the 1/4 mile, 1/8 mile, and even 1/10 mile during that time, but it is likely over 3000. I still have the timeslips from nearly every one of those passes too!

I branched out into some other forms of racing as well. I have over 100 laps at speed around Road America, and I drove a BMW Z4 Coupe for 4 laps around the Nurburgring in Germany. I have also participated in a couple of 1/2 mile sprint events.

My 2009 G8 GXP may be a little plain in appearance compared to the other beautiful finalists in your Virtual Car Show, but it certainly has a story. When I saw the Pontiac G8 GT Prototype at the 2007 Chicago Auto Show, I fell in love. I knew that I had found the right modern Pontiac to put in my garage. When I learned in 2008 that they would offer a GXP model that had the more powerful LS3 engine and optional manual transmission, I knew that I HAD to have one. I started saving up for a down payment, with the intention of ordering a 2010 Pontiac G8 GXP. That’s when things got a little “messy”. First, I had to divert my savings to a divorce attorney, and then GM kills off Pontiac. I was devastated. I had already been tracking the production of 2009 G8 GXPs, and I knew that they had already ended production, so what was out there was going to be it. I couldn’t buy the GXP until I sold the house that I owned with my ex-wife, and the spring of 2009 was NOT a good time to be selling a house. The days and weeks seemed to pass way too quickly, with G8 GXP inventory dwindling by the day, and no reasonable offers. 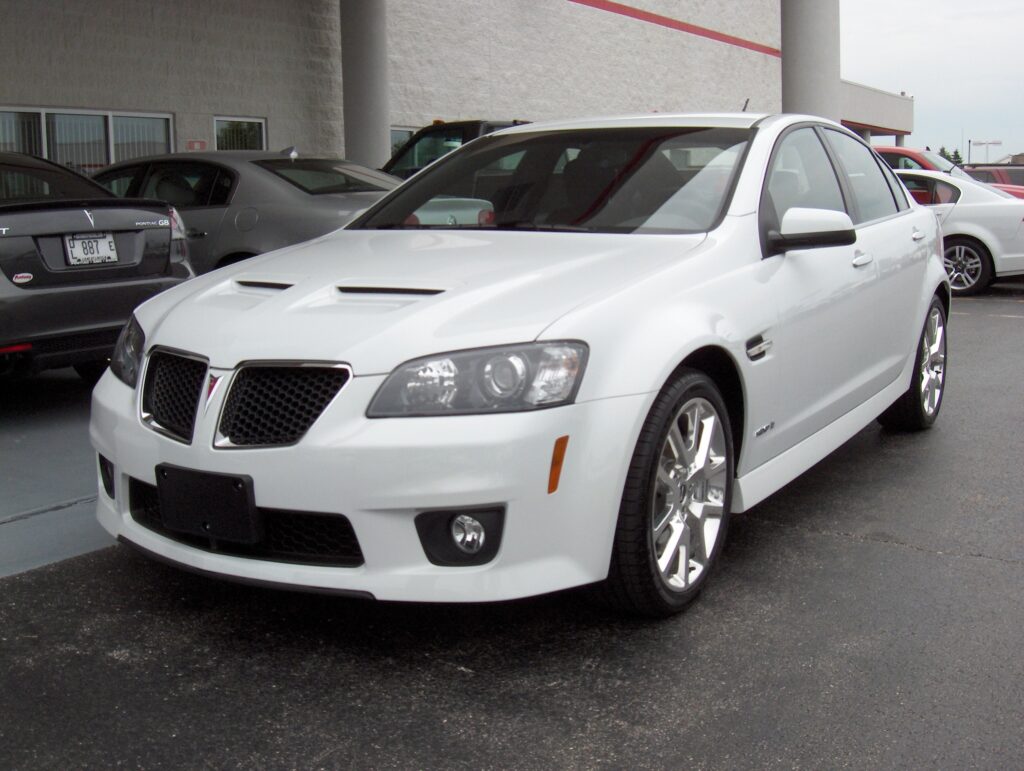 Finally, at the end of June 2009, we got an offer that was tolerable, so we accepted it. I immediately began tracking down all of the G8 GXPs within 500 miles of my home in Madison WI. I was only interested in ones with the manual transmission, so that really limited my options. By that point, there were only 13 manual transmissions G8 GXPs within that 500-mile radius. By then, color options were running out, and my 3 favorite choices were all gone. The closest car to my house was a White Hot version with the manual transmission (a must for me), no sunroof (a preference to give me more headroom with a racing helmet), and had the sharp onyx/red two-tone interior. The White Hot exterior was my second to last color choice, but the interior made it a little flashier to me, so I called and got a deal put together over the phone. The dealership that I bought it from knew what they had, in fact, they had dealer-traded in a number of other G8 GXPs as well (there were 5 automatic GXPs with mine on the lot), but this was there very last manual transmission car. They wouldn’t take a penny less than the $40,690.00 MSRP and wouldn’t even except the GM Supplier Code that I had acquired from a friend, but I wasn’t in a position to walk away. Good thing I didn’t because after signing the paperwork, I discovered that they had a couple of other customers lined up behind me, including one who offered them $5,000 over MSRP (after I had already signed my contract and put a $1,000 deposit on the car).

All my research to find the right G8 GXP evolved into a bit of a crazy journey. At first, I was just sharing the information with other G8 GXP enthusiasts and trying to estimate the production breakdown of all of them. Ultimately, with the help of a few others, I managed to track down every one of the 1,829 Pontiac G8 GXPs ever built. I am now the maintainer/organizer of the G8 GXP Registry, and I have the only official breakdown of them on the planet. GM never bothered to keep track since they killed off Pontiac already. Using this information, I was able to confirm that my car is extremely rare. Of the 1,829 built, only 299 were painted the White Hot color. Only 46% of the GXPs built came with a manual transmission. Only 31% had the onyx/red interior. Lastly, only 19% had no sunroof. My car turned out to be 1 of only 10 built in this configuration, and it is one of the 10 rarest GXP possible configurations. 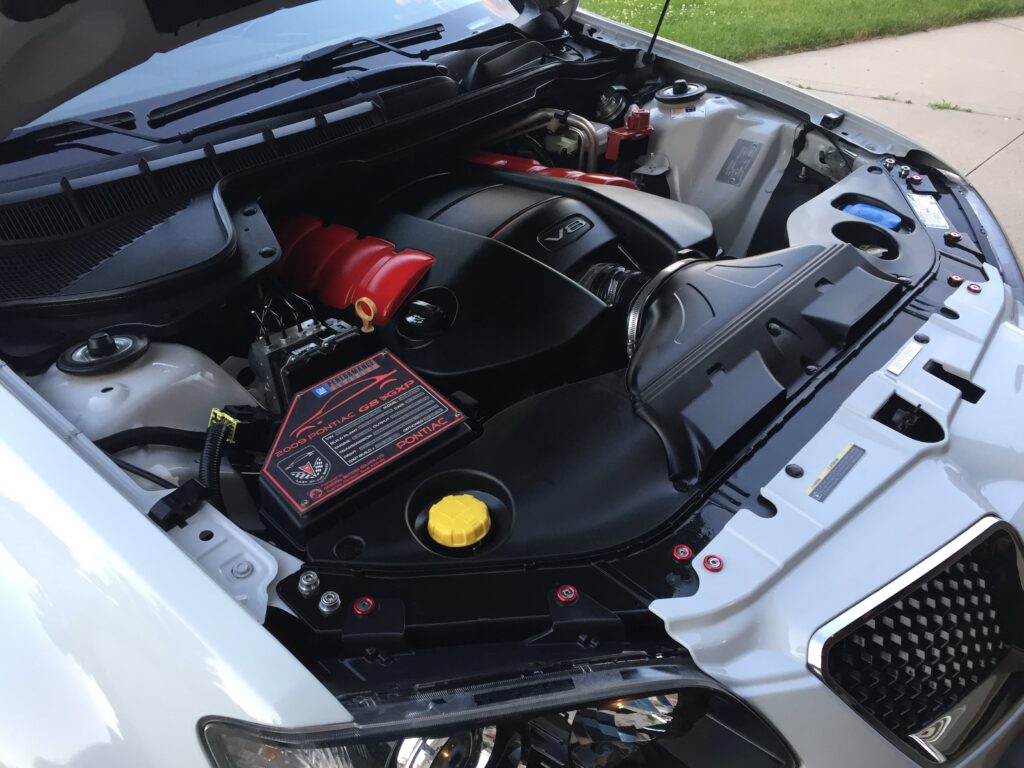 Despite the rarity and value of this car, I had no intention of just stashing it away. I planned to drive, race and enjoy it, and I sure have. It now has about 62,000 miles on it, with many of those on a dragstrip or road course. Just over 10 years ago, when the car was still completely stock and on Goodyear RS-A all-season tires, I managed to run a 1/4 mile time of 12.921 @ 108.89 mph. That was the quickest ET for a bone stock manual transmission GXP on stock tires, and the record still seems to stand now 10 years later, because I can’t find a documented time faster.

I kept the car stock until the warranty expired and then I began to modify it to my liking. The first improvement was a VCM Over-The-Radiator Cold-Air-Intake, which improved my 1/4 mile times by almost 2 tenths with no corresponding tune. I also did a Heat-Soak-Reduction kit (relocates the IAT sensor for more realistic measurements), Kooks Long-Tube Coated Headers, Solo Performance connector pipes with Hi-Flo Cats, a Solo Performance Mach Balanced Cat-Back exhaust, a custom street tune by my good friend Josh Herrell using HPTuners. I also added BMR Toe Rods, Trailing Arms, and Poly rear cradle and differential bushings to cut down on wheel hop. These bolt-ons got me up to a dyno verified 422 RWHP and 416 RWTQ. This was good power, but through the urging of friends, I ultimately had to add just a bit more. With the help of Josh Herrell, I installed a Texas Speed & Performace cam rated at 224/228 .581/.588 112 cam. I complemented it with LS7 Lifters, & PAC 1219X springs. Josh then updated the tune to work with this setup. All the extra power proved too much for the stock clutch, so after installing a clutch that didn’t cut the mustard, I ended up going with a Monster LT!S (C& Corvette) clutch kit, with Katech C6 Heavy Duty Master and Slave Cylinders, and a remote bleeder valve. I then broke the factory differential and replaced it with a Camaro 1LE 3.91 geared center section, that I then broke and had to rebuild. The factory components were struggling with launching a 4300 lb race weight car to 1.7 60 foot times on drag radials with 4750-5000 rpm launches. These got me down to a best 1/4 mile time of 12.191 @ 112.35 mph with a 1.693 60 ft time INTO a 20 mph headwind. The combo should have been good to barely break into the 11’s, but I started breaking too much expensive stuff on the race car, and have retired it from active drag racing duty.

The last upgrade was to the braking system. I managed to get the complete rotor and caliper set-up from a 2017 Chevrolet SS that was damaged in transit from Australia. I now have FNC-coated rotors, along with bigger rear rotors, and Brembo 4-piston calipers all around. The G8 GXPs came with only Brembos on the front.

I plan to be the only owner of this great car, and I love every day behind the wheel!