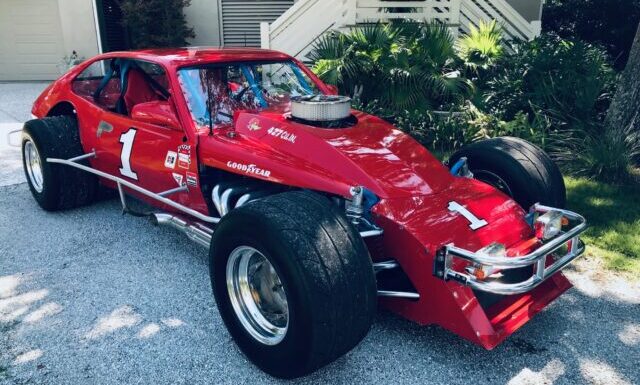 We first caught a glimpse of Dick Trammell’s STREET-LEGAL NASCAR modified Ford Pinto when he entered it in the Racing Junk Virtual Car Show we didn’t really have a proper place for it. So we wanted to reach out to Dick and find out more about him and his wild Pinto. 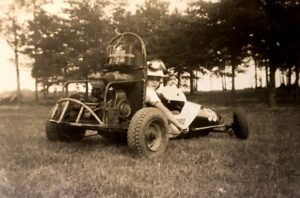 A little of my background:

In 2016, I retired from a career in the hospitality industry.  In the 1990s, while serving as the executive director of the North Carolina Travel and Tourism Division, I commissioned the first state motorsports poster in America, and declared North Carolina as “The Motorsports Capital of the World.” I did it to salute a sport and industry that has had a significant economic impact on my home state.  Then, as now, the majority of NASCAR teams were based within close proximity to Charlotte, NC.  At the time, we were home to Charlotte, Rockingham, and North Wilkesboro speedways, as well as a myriad of short tracks.  In the late 1980s, when Bahari Racing, Michael Waltrip’s team, opened its new race shop in Mooresville, NC, the shop was designed to be visitor friendly. One entire wall of the reception area and hallway to the shop offices was glass so visitors could watch the mechanics working on various stages of building or prepping the cars.  Only the engine room was windowless!  Soon after, other area race shops wisely followed Bahari’s lead as “visitor friendly.” 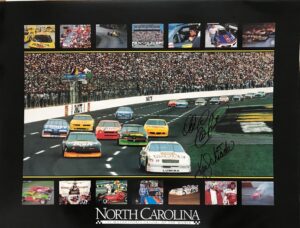 How did I get into this industry?

In 1955, when I was 9 years old, I started racing micro-midgets in the juvenile division of the Forsyth Micro Midget Club, in my hometown of Winston-Salem, NC.  Since my car wasn’t finished, I drove a friend’s car in my first race.  I started dead last and finished dead last, but I was hooked.  Over the next two years, I lost only one other race.  My “fledgling” racing career ended when Mother and her second husband split, but I was already “addicted” to racing.

My mother’s great-uncle, A.D. Burke, was one of the men that built Peace Haven Speedway, a ½ mile dirt track, with board fence and all, off Peace Haven Road in Winston-Salem.  It was one of the first NASCAR tracks. When I was a child, I attended races there with my uncle, and when I was 10 years old, I got to drive an old A-Model Ford around the track for a few laps. The drivers that competed there were some of the early legends of NASCAR.  Racing at the track ended when NASCAR made Bowman Gray Stadium home of its first and longest-running weekly Saturday night racing venue.

In 1960, my mother again married, and this time to her high school sweetheart, who was a long time Gulf dealer in Winston-Salem.  He was an amazing person.  My first job as a teenager was pumping gas, changing oil, and washing windshields at his family-owned and operated Gulf Oil station.  For me, that first job was truly educational experience in cars and equally important, customer service.  He was so trusted that customers used to bring him their car to trade-in because they felt he could negotiate a better deal for them.

I attended my first sports car race at the old Virginia International Raceway (VIR) in 1965. It was there that I fell in love with Formula Vee racers.  In 1984, I bought a 1972 Zink C-4 Formula Vee that had been sitting in an enclosed trailer in the warehouse of the owner’s father – untouched – for ten years!  The owner, an engineer, had built the car and enclosed trailer with the best parts and engineering available.  I joined SCCA and started competing in SOLO I events to learn the racecourses in the Southeast before moving up into open-wheel competition.  In 1987, I won the SCCA Southeast Division Solo I Championship.  In 1989, I finished 3rd in the “SARRC MARRS Shootout II” on the road course at Charlotte Motor Speedway.  In 1999 I was in the process of restoring the car for vintage racing when we moved from Raleigh, NC back to the Charleston, SC area.  With mixed emotions, I sold the Formula Vee to buy a bigger boat. 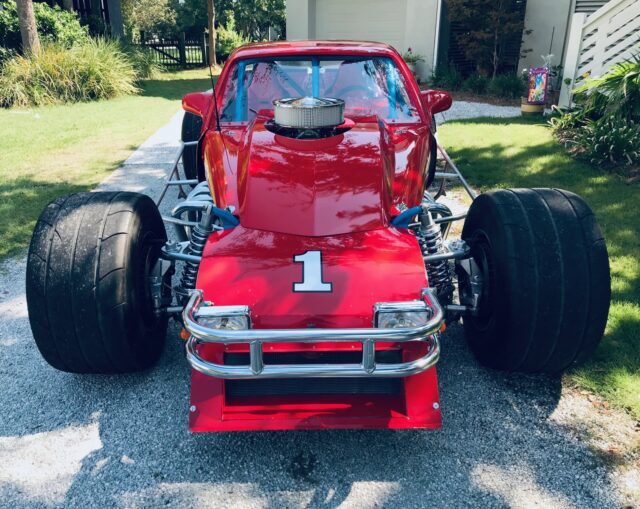 Story of the car:

A couple of years ago my wife and I were driving Westbound on I-40, heading home from Winston-Salem, when in the Eastbound lane I saw a 1930s-vintage, Bowman Gray NASCAR Modified coupe that had been converted to “street legal.”  Much to my wife’s dismay, the moment I saw it, I started dreaming of one.  In June 2019, I saw the “street legal” NASCAR Modified 1974, Ford Pinto, for sale on the Internet, and the rest is history.  Since I just turned 74, I figure it will be my last race car.

The little red Pinto was built in Connecticut in the late 1970s by Mark Berndt and his father.  It’s my understanding that Mark drove the car in the NASCAR Northeast Modified Series.  The last time it was on the track was in a vintage race in 2010.  Mark stepped away from racing after his father passed away.  Gary Babineau, owner of Babineau Metal Works, in Auburn, IN had worked in CT during his engineering career and was familiar with the car and Berndt family.   When he heard it was for sale as a “roller,” he bought it to convert to “street legal,” and play with.  Gary’s “claim to fame” is having built 18 beautiful, reproduction, 1960s vintage Indy roadsters, for museums and private collections.  A man in New York saw the car on YouTube, tracked Gary down, and talked him into selling it.  Last summer, when his daughter was getting her driver’s license, he sold the car to me, in order to buy a daily driver for his daughter. 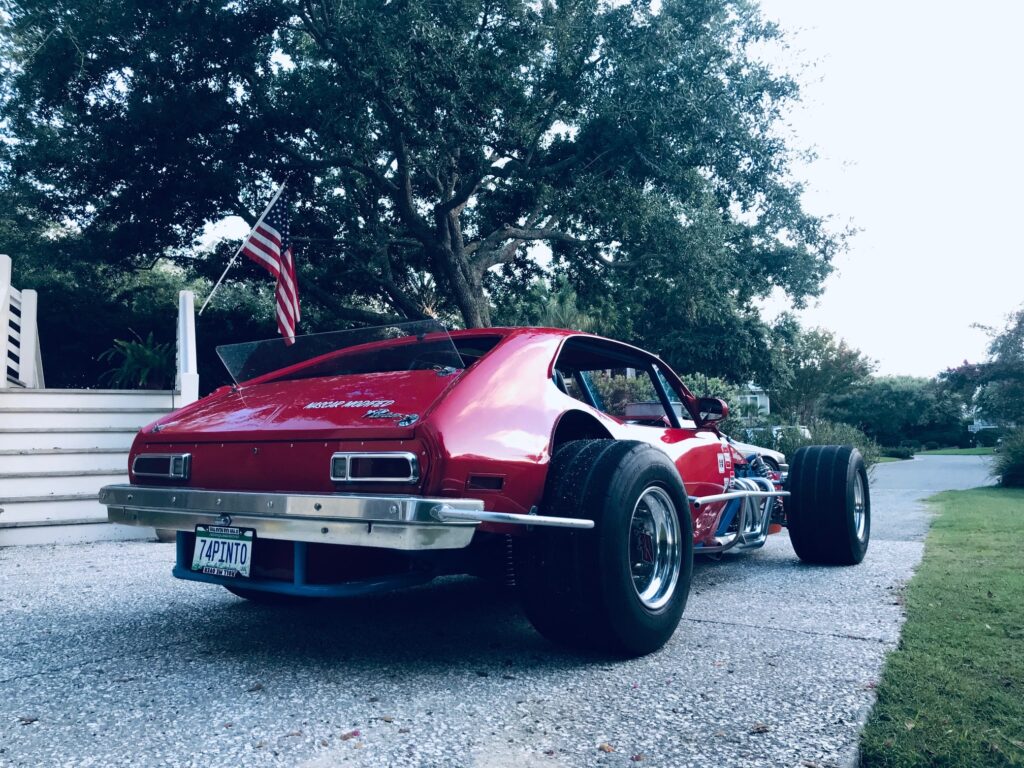 Since taking delivery of the car last August, I’ve changed the car’s number to #1, to reflect the fact it’s the first “street legal” vintage, NASCAR Modified in South Carolina.  Though my wife questioned my sanity for buying it, she now climbs through the passenger side window (the doors of real race cars don’t open) and accompanies me on most rides.  Most people question me about the noise of the exhaust, and then look at me with a shocked expression when I tell them the screaming of the square-cut racing gears of the quick-change rear end almost drown out the exhaust thunder!

Last September, after Hurricane Dorian hit Charleston, I was bringing the car home from a warehouse where it was stored for the storm, when I experienced what I thought was disc brake caliper seizing.  Upon inspection, I found the welded spool in the locked, Frankland quick-change rear end had failed.  When I contacted Frankland Racing, I learned that all new spools and axles are 31-spline rather than 12-spline like my original.  Since I wanted to keep the car authentic (except for the motor and interior), I tracked down Jamie Frankland, the grandson of the founder of Frankland Engineering.  In a call to him, I learned the welded spoon indicated it one of the original Frankland rear ends.  He said that as soon as his grandfather and father had generated enough revenue, they began using forged spools.  A friend and I drove the rear end to Balm, FL, for Jamie to rebuild. When Jamie checked the numbers on the rear end, he said it was indeed one of the first the company had built.  Today, Jamie Frankland still competes in vintage, dirt track, modified events, in his two vintage racers. 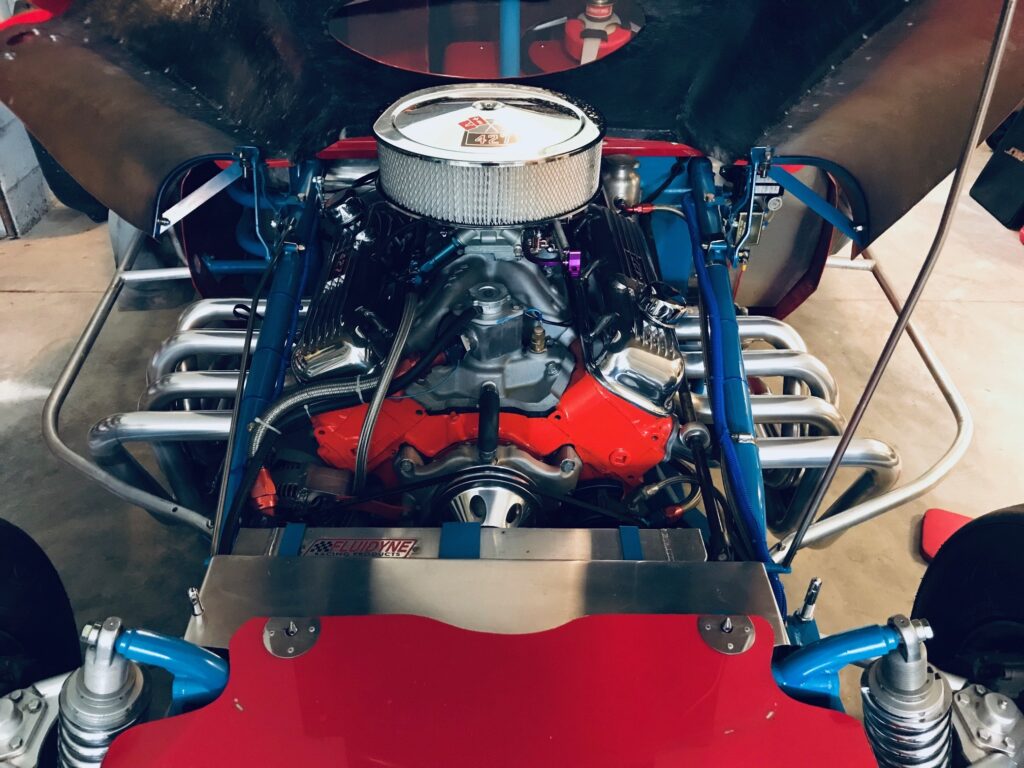 Though I would love to get the little Pinto on Bowman Gray or another ¼ mile asphalt flat track that it was built for, my plan is to use it for Cars and Coffee, and car shows.  It is without question the most videotaped car that I’ve ever owned or driven!  No matter where it goes, it always draws a crowd.  At the first Cars and Coffee that I attended, it was referred to as “a loud and proud show stopper!”  In November, it will appear at the incredible “Cars on Kiawah,” car show.

Our son is a “reformed” motorhead that spent his first year out of college building and driving Formula 2000 racers for a team in Pennsylvania.  He went on to spend the next five years turning wrenches on Porsches a European auto shop in Raleigh, NC.  In 1998 he bought an inn in Western North Carolina, and today doesn’t even change his own oil!  The first time he saw the Pinto, he asked why I bought it.  My only answer was that I always wanted one.  With him at the wheel, we drove to Costco to fill up the fuel cell.  When we pulled up to the pump, literally every customer walked away from their car to take pictures of the little Pinto, our son looked at me and said, “Now I get it.”