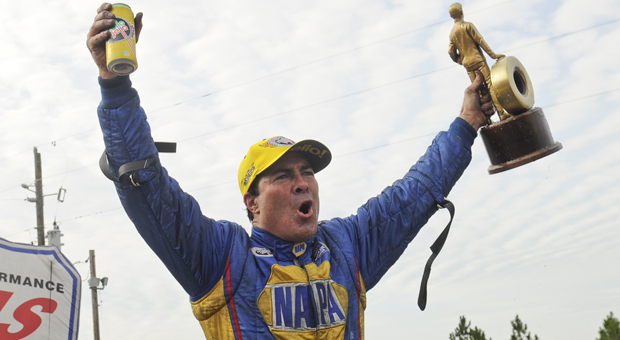 Ron Capps is living the dream.  His performance this season in the NHRA Funny Car class has him going into the Summit Racing Equipment Southern Nationals on top; and during the recent break in the drag racing calendar, Capps spent time supporting his sponsor at the NAPA Expo and still found a way to keep rocking the night away.

At this weekend’s race at Atlanta Dragway, he’s ready to bring another win to his camp, but it’s also the closest race to NAPA headquarters.

“This track in Commerce is usually hot, humid and it’s always been a track that’s tricky and demanding,” said an insightful Capps.  “That’s sort of what we saw at our last race in Houston and we were able to win that race.  So, that’s gives me a lot of confidence going to these racetracks.  It’s certainly put out world record numbers, without a doubt.  Track records will probably fall.  I think that’s what makes this race so big when I look back as a kid.  It was the Winternationals, the U.S. Nationals, of course and the Southern Nationals were always right there.  We get a lot of NASCAR fans and racers to come over.  It’s close to Charlotte and we get that crowd to come out.

“If we can get a win there, it’s in the backyard of NAPA and Coca-Cola with Mello Yello.  If you can win anywhere close to where you might have your executives out there, it’s the biggest thing you can do, besides having your entire family out at a race.  I feel good about going down there this weekend.”

Capps only has a slim six point leader over Don Schumacher Racing teammate, Matt Hagan.  He has collected two wins this season in Gainesville and Houston from the first seven events with a runner-up at the season opening race at Pomona.  He will be the first to tell you they are close to finding their desired consistency on the track with their new set up.

“It’s been one of those seasons,” said Capps.  “We had the six-disc (clutch) that we tried early on, which I think is the future of nitro racing.  A lot of the teams are running the six-disc and I felt in the last year we had success with the six-disc and a car that could run for the championship and we did pull it out the Friday of the Gainesville race and then end up winning that race.  So Rahn Tobler (crew chief) has left that five-disc in it.”

“But I see us going back to the six-disc.  It’s those little things like that has just bit us here and there and caused a little bit of bad qualifying positions at a couple of the races and with that you have those first round exits.  Those are going to happen.  I feel we have a car that is more consistent and again on that last subject, we brought out a brand new car in Las Vegas.  We needed a run under our belt and we didn’t do well in Vegas and went out first round.  To get the win the very next race shows the consistency that Tobler is going to have with this new car.”

In the meanwhile, Capps tied Tony Pedregon in Gainesville and then with his Houston win surpassed him making him No. 2 on the all-time Funny Car win list.  It’s something he’s still trying to wrap his head around.

“It’s funny, because a part of me wants to take that trophy over to Don Prudhomme’s and put it in his shop because he’s the one that took a chance on me as a Funny Car driver when I had never sat in one. That was a big deal,” said  Capps.  “Learning under his tutelage and later on with Roland Leong and Ed ‘The Ace’ McCulloch and seeing them being the team leaders and what I learned from those guys in the Funny Car ranks.  When they told me I was No. 2 on the all-time Funny Car list, it made me really appreciate all the good people that have been around me.  I don’t feel like I’m good enough as a driver to be No. 2 in the history of the sport, but rather the awesome people around me and really good race cars.  To have all these wins it’s really cool right now with Rahn Tobler (crew chief).  He’s proud of each and every win.  There’s no ego.  He’s really is proud of the fact that every win he gives me, it’s another notch in the belt of my career.  It’s great to have a crew chief like that.”

Keeping his personal momentum going Capps attended the NAPA Expo in Las Vegas for his long time sponsor and again got to share some time with his NAPA teammate, 2014 NASCAR XFinity champion, Chase Elliott.

“Yeah, last week, I was at the NAPA Expo for the first time and had only heard about these events,” said Capps.  “I feel they outdid themselves.  We’re talking 22,000 NAPA people for five days in Vegas.  It was an unbelievable amount of people.  They took over the Mandalay Bay and the Luxor hotels and they had celebrities left and right coming in.  It was a week-long unbelievable event topped off with a concert put on for 17,000 NAPA people.  We signed autographs all week.  Dale, Jr. and Chase, my teammate, of course Jeff Gordon, Tony Stewart, and Joey Logano were all there.  It was just a very happy, happy event and it might have been work, but it was fun.

“It was good to catch up with Chase.  We get to do a lot of autograph sessions and we’re doing one before Atlanta in Marietta.  It’s been fun.  He came in as an 18-year old and it’s going to be even more funner to watch him jump into the 24 car and I can’t wait to get to some of his races and hang out in his pits.  We’re trying to get him to a drag race and almost had him there in Charlotte last year.  We’ll get him out this year.  I can’t wait to stand this kid at the starting line.  At our last appearance, he went to my YouTube.com channel where at one of my tests I had put these little cameras all around the inside of the car on one of our 4 second, 320 mile per hour runs.  It showed the mayhem.  So at our last appearance we did together the first thing he said was he had seen the camera view looking back at me and he said that was unbelievable.  I would love to get him in the car to do a burnout.  I’m not sure that’s ever going to happen.  Still can’t wait to stand him up on starting line have him to experience the power.”

Capps had time for a little fun as well, finding himself at the Rock in Rio weekend hanging with Metallica and Linkin Park.

“Well last weekend was Mother’s Day weekend so I wanted to put something together since I was in Vegas,” said Capps.  “I flew my wife over on Friday and I was going to surprise her by taking her to the Metallica show at the Rock In Rio festival.  I got in contact with my friend, lead singer, James Hetfield (Metallica) and he set us up early on and had some friends come over.  Honestly, I wasn’t big on going to festivals, but it was a blast to watch.  We also have a friend with Linkin Park, who’s a big race fan and they played right before Metallica.  What a great event right in the middle of downtown Vegas and you thought you were in Rio, almost.  It was like a little city inside this place.  It’s always good to see Metallica.  They’ve been on the road and in between working on a new album.  It was their first playing in the States in a long time.  I think they were just as excited to be on stage as the crowd was to be there.”

Then while at the show, Capps got another message about an upcoming Snoop Dog show in LA on Monday.  How could he turn it down?

“This last week has been crazy,” grinned Capps.  “I got this note from a friend of ours with Nikki Sixx that the little theatre up in Burbank that used to be The Tonight Show building is now holding these really intimate concerts.  They had the Foo Fighters not that long ago when they debuted their last album.  He told me Snoop Dog is going to play a surprise show for his new album coming out on Monday night and I looked at my calendar and went ‘Holy Smokes’ I’m home for a day, but I need to spend some time with my daughter. So I invited her and she brought a girlfriend of hers along and we jammed up to LA and it was more than I could have ever imagined.  It was a lot of fun.  Pharrell Williams, it turned out is the producer of this album and it has Stevie Wonder on it.  He got up on stage and performed with Snoop Dog.  They had a chat session beforehand and we’re only talking around 300 people in this small venue with unbelievable sound.  I’m glad I went spending some fun time with my daughter.”