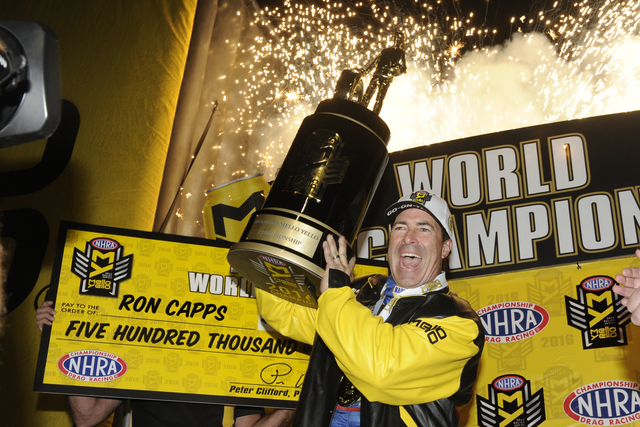 Ron Capps has been nominated for an ESPY award in the Best Driver category thanks to his impressive performance in the 2016 Funny Car world championship season and good start in the 2017 season. Despite a noteworthy, 23-year NHRA Mello Yello Drag Racing Series career, this is the first time he has been nominated for the award. His fellow nominees are Formula One driver Lewis Hamilton, IndyCar driver Simon Pagenaud and NASCAR drivers Jimmie Johnson and Martin Truex Jr.

“What we did with our NAPA Auto Parts team last year was huge after trying to win the championship for about 20 years,” Capps said. “Just to be nominated with this group is unbelievable.”

Capps and his NAPA Auto Parts Dodge Charger R/T Funny Car team had a breakthrough season in 2016. He took the 2016 Funny Car championship crown after winning five national events in 10 finals appearances. Capps set a record by finishing second in points four times in his Funny Car career before ever winning an NHRA championship. This year, Capps has already won five of the first 11 races of the NHRA Mello Yello Series season. He’s also established a strong lead in the Funny Car points standings.

“It will be fun to see our NHRA nation and all the NHRA fans try to beat those guys from NASCAR, IndyCar and Formula One,” Capps said. “It will be a star-studded night and just attending will be something I’ll never forget.” Fans can vote for Capps and others by logging on to http://es.pn/TupHtl. The 25th edition of the ESPY awards will be hosted by Peyton Manning and will be held at the Microsoft Theater in downtown Los Angeles. Voting for the ESPYS ends July 12 at 8 p.m. ET.