RacingJunk News > Racing > Drag Racing > Capps Has His Mojo Back 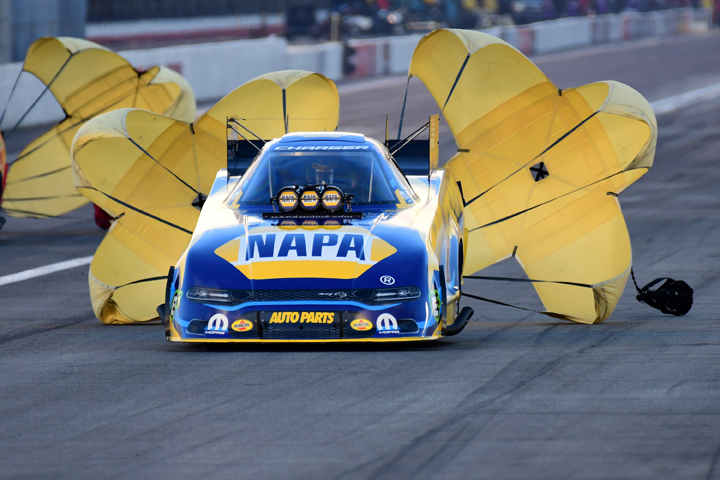 Leading up to NHRA’s eighth race of the year, the Virginia NHRA Nationals held May 17-19, the NAPA Dodge Charger SRT Hellcat of 2016 champion Ron Capps had pretty much been missing in action. In fact, it appeared Capps’ aha moment arrived the moment the team changed from their primary to spare car, one that had languished in the hauler since Phoenix, traveling to races but never racing.

The Don Schumacher Racing team changed cars between the two Saturday zMAX Four-Wide runs and sent the car back to be front-halved after Atlanta, their first victory of the 2019 season. Although Tobler felt he had a very good car for Houston, and then for Charlotte, weather and track conditions necessitated the change. The team didn’t make it past the first round on the 140-degree zMAX racetrack, but they felt they had made the right change going forward.

Indeed they had as Capps beat Tim Wilkerson in the next race at Atlanta and did the same thing last weekend in Richmond, taking down reigning champion J.R. Todd’s Toyota Camry from Kalitta Motorsports in last Sunday’s finals. The two victories moved Capps and his team from ninth in the standings after Charlotte to third two races later. It was the driver’s 120th career national event final, giving him 63 wins and eighth place all-time. 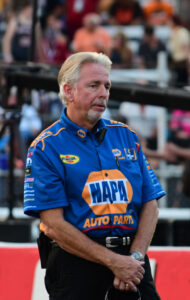 “I saw about 120 Kalitta members walking around up there on the starting line and all I can think of is their Kalitta mosh pit and how I wanted to spoil it,” Capps said of his final round against Todd. “I do not want to lose and watch the mosh pit at the starting line. Tobler told me back in the pit that we were going to put it just like the first found and I rolled it in there and it did what it had to do,” he said of his racecar and crew chief. “That’s vintage Rahn Tobler.”

Capps’ team was still running the older Charger body until the start of this season, while DSR teammate Matt Hagan debuted the SRT Hellcat at Denver last July. “We could not have won a couple of those rounds today without that Hellcat and its downforce. I was able too keep it straight even with a hole out. Rahn Tobler, this is our 30th win together since 2012. That’s craziness!”

NHRA has the Memorial Day weekend off before hitting the road for a four-race June schedule that starts at Joliet’s Route 66 Raceway outside Chicago. “We know we can go good in cool or hot weather,” Tobler said. “We’ve got momentum and Chicago, according to the long-range forecasts, is supposed to be cool. Beyond that, we’ll deal with it.”

In June, Capps’ NAPA squad and the rest of the NHRA national racers will have to face four very different sets of conditions at Joliet, Heartland Motorsports Park in Topeka, Bristol’s Thunder Valley and at Norwalk, Ohio. Tobler and Capps feel like they’re ready for all of them.