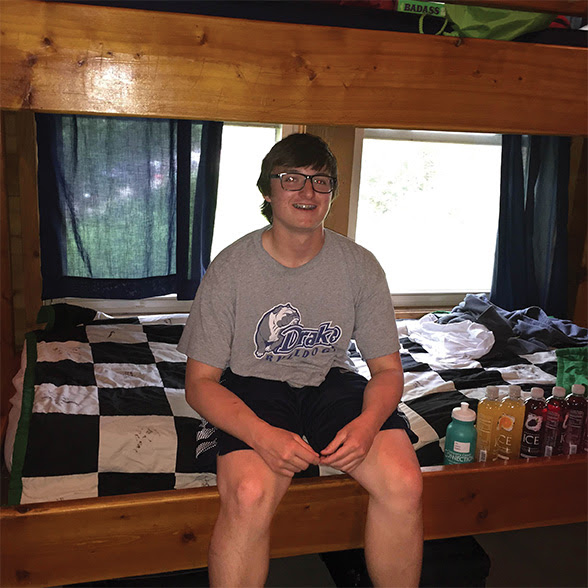 Kyle Robinson, a 16-year old cancer survivor from central Iowa, will take part in the third-annual WELD Racing Go-Kart Spectacular at the 2015 FVP Knoxville (Iowa) Nationals August 12, 2015. As a sponsor of the event, WELD earned two seats in the race and elected to provide one of the “seats” in the event to Robinson. The other WELD seat will be auctioned off at the event to help support the cause.

Robinson was diagnosed in March 2000 with a Wilms tumor in his kidney. He has been cancer free for 12 years and is a Leader in Training (LIT) at Camp Heart Connection, a camp for children with cancer and their siblings. The camp is sponsored by Des Moines-based Children’s Cancer Connection, a charity established in 1988 to provide programs and services to children battling childhood cancer.

Robinson, an incoming junior at Southeast Polk High School in Pleasant Hill, Iowa, is described by his mom, Kim, as “a big race fan” having grown up at dirt tracks in central Iowa watching his father compete.

“Kyle always wanted to race, but was never allowed to by his doctors and me due to only having one kidney,” said Kim Robinson. “He’s excited to meet all the drivers and spend time with them on the track.”

The WELD Racing Go-Kart Spectacular is held in conjunction with the Jeff Gordon Children’s Foundation, which also supports the fourth-annual Tony Stewart Kick-it Cup to be held that week. The race will take place at Slideways Karting Center in Knoxville Wednesday, Aug. 12, with an all-star lineup of NASCAR and former sprint car drivers racing their biggest fans.

NASCAR champions Gordon and Tony Stewart, as well as 17-time Sprint Cup winner, Kasey Kahne, and Sprint Cup Rookie of the Year Kyle Larson, will race against 50 race fans in Slideways’ fastest winged karts. The 50 spots available for race fans, at $400 per person, sold out in less than two hours. Fans can still attend the event and get more information when they visit: http://www.kick-it.org/games/2015/08/third-annual-weld-racing-go-kart-spectatular

“What a thrill for us at WELD to provide this outstanding young man with a chance to race in our event,” said Norm Young, president and CEO, WELD. “We look forward to meeting Kyle and being on hand in Knoxville to support this fun event that supports a serious cause to beat childhood cancer.”

All proceeds from the week’s Kick-It events will go to Kick-It, a program and partner of the Jeff Gordon Children’s Foundation, which raises money for pediatric cancer research.