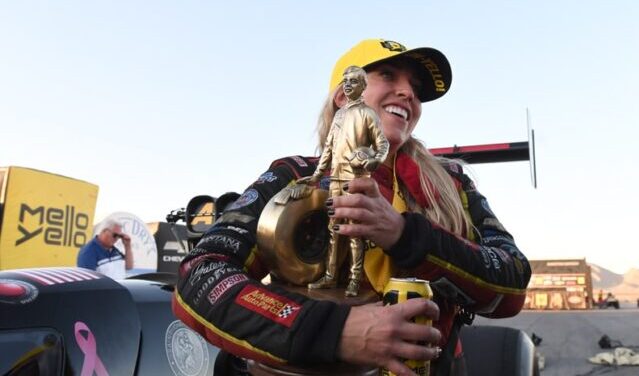 Brittany Force is a racer. The real deal.

To prove it, Brittany Force has, this year, earned both ends of the national ET and speed records, the latest being 338.17-mph burst on The Strip at Las Vegas Motor Speedway last Friday night during the second round of qualifying for the series’ penultimate race of the season. Brittany’s ET record of 3.634-sec came in the first Countdown to the Championship race at Maple Grove Raceway outside Reading, PA.

From her No. 2 qualifying perch, on Sunday Force upped the ante by earning her second Wally winner’s trophy and yellow hat of the season, closing the gap to reigning Top Fuel champion and points leader Steve Torrence. Her first win of the year came this spring at Houston. Beating Torrence fairly and clearly in their final round match-up, Force now stands a measly 16 points back with 1.5 points on offer during next weekend’s World Finals on Auto Club Raceway at Pomona’s 1,000-foot dragstrip. 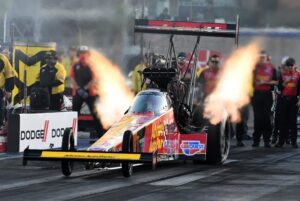 All wins are special; Brittany’s Top Fuel grab was the 151st for a woman in national competition, coming on the heels of good friend, two-time Pro Stock champ Erica Enders’ 150th win for a female competitor just minutes earlier. Brittany’s was the 500th Top Fuel victory in the history of the class, driving for a new sponsor this year, Advance Auto Parts and with a different crew chief and team makeup in the 2019 season.

It’s said the hardest relationships to build in sports are also the most satisfying. When co- crew chiefs David Grubnic and Mac Savage came to John Force Racing before the 24-race season began, their objective was – as any crew chief’s must be – to gain the championship with their appointed driver. Grubnic, who had a satisfying Top Fuel driving career of his own with Kalitta Motorsports, understands the pressures inherent in driving and the need to succeed each time the Christmas Tree alights.

The Countdown to the Championship battle is between 10 drivers, but it’s fair to say positions eight through ten are eliminated in this year’s title fight: Don Schumacher Racing’s Antron Brown (-209), Richie Crampton of Kalitta Motorsports (-227) and Stringer Performance’s Clay Millican (-247) are too far behind to gain contention. However, behind Force are Doug Kalitta, only 55 points behind Steve Torrence, Steve’s father Billy standing 86 points back, DSR’ Leah Pritchett (-135), Force’s teammate Austin Prock (-158) and Mike Salinas (-166) have some room to move forward.

As she prepares for the season finale, Force sees similarities between her 2017 championship and her quest, two years later for a repeat performance. “It’s taking me back to 2017 when we were in the same position, chasing Steve Torrence. We’ve been here before; we got the job done and Steve is shaking in his boots right now!”

Two years ago, she used a runner-up finish at Las Vegas to vault to her first title; will Brittany Force use her Vegas winner’s trophy to stomp on Torrence’s championship hopes a second time?