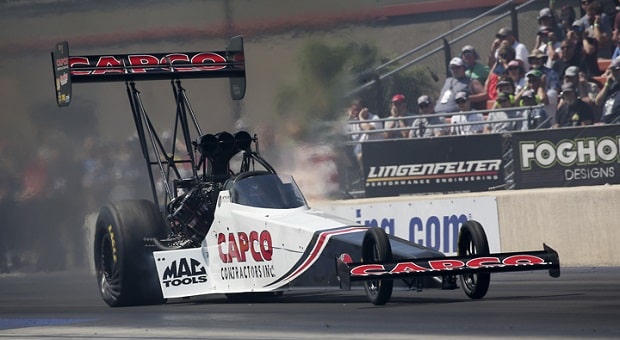 While the rest of the United States will be watching above on July 4th for patriotic displays of pyrotechnics, fans of the nitro-powered, 11,000-horsepower open- and closed-wheel behemoths will get their chance to see the stars battle for supremacy on the 1,000-foot dragstrip, competing for qualifying spots on both Friday and Saturday. The exhibition Mountain Motor Pro Stock and Top Fuel Harley categories are also on-hand for the festivities.

This weekend’s official entry list, as posted, shows a minimal field of 13 dragsters for the Top Fuel category, all of them continuing to chase Steve Torrence as he and his team perform at the highest level. Torrence won this race last year en route to his 11 wins and first NHRA national Top Fuel championship; he’s intent on adding to his current total of six 2019 Top Fuel Wally trophies. In fact, Torrence has won half the races held to date!

Owning 33 Top Fuel wins in his career and half the wins this year, Torrence is still intent on improving his abilities behind the wheel and his team’s work in the pits. “For now,” he said, “we just want to keep moving forward. We want to stay on our ‘A’ game and try to run with that through the end of the year.”

Although fellow independent racer Mike Salinas, absent this weekend, stopped Torrence’s torrid win streak at Bristol, the Texan rebounded at Norwalk, the most recent contest on the docket. While he lost in the final round in that Tennessee contest, Torrence considered it a blip in the road. 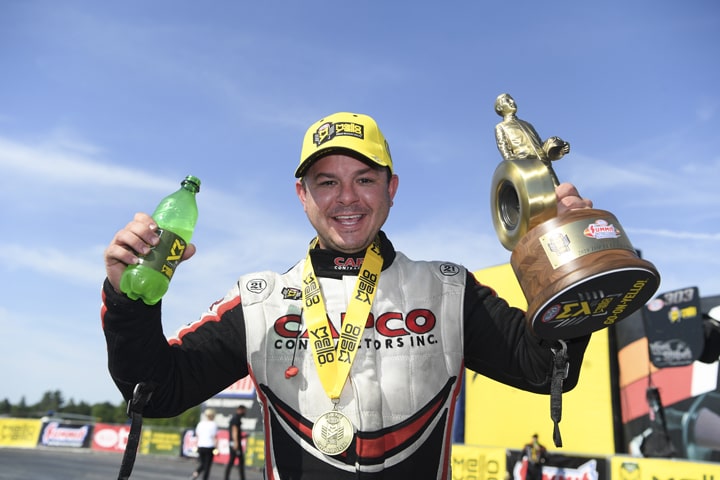 “You know, at some point something’s going to happen even if everyone does their job perfectly. You go back and race,” after any loss. “We want to win every race we go to. You’re not trying to play strategy and get into the top 10. We want to win all of them,” as he did in last year’s six-race Countdown to the Championship.

In Epping, Torrence will have to contend with a grouping of former champions and champions-in-waiting as he attempts to add another yellow win hat to his collection. Three-time champ Antron Brown of Don Schumacher Racing, 2017 champ Brittany Force and rookie Austin Prock from John Force Racing, regular title contenders Doug Kalitta and Richie Crampton of Kalitta Motorsports, six-time IHRA titleholder Clay Millican, fellow independents Terry McMillen and Scott Palmer, along with Dom Laguna, Dan Mercier, Cameron Ferre and Audrey Worm are all looking to be giant-killers.

While Torrence hasn’t picked up all the “little” qualifying points, he continues to stand tall in the points tally, leading Kalitta 1,164 to 760 points. The balance of the Top Fuel ten-best is much tighter, with third placed Brittany Force holding 744 points, Brown owning 733, Salinas tallying 732, followed by Leah Pritchett (651), Millican (649), Crampton (532), McMillen (524) and Prock rounding out the grouping with 518 points.

The role of these nine racers is obvious: They must stop or contain Steve Torrence’s progress towards a second straight NHRA Top Fuel championship. Will they be able to do so in Epping? With hot temps forecast for every day except Sunday and the possibility of scattered thunderstorms on Saturday, conditions should challenge every crew chief and tuner. Even Richard Hogan and “them CAPCO boys.”