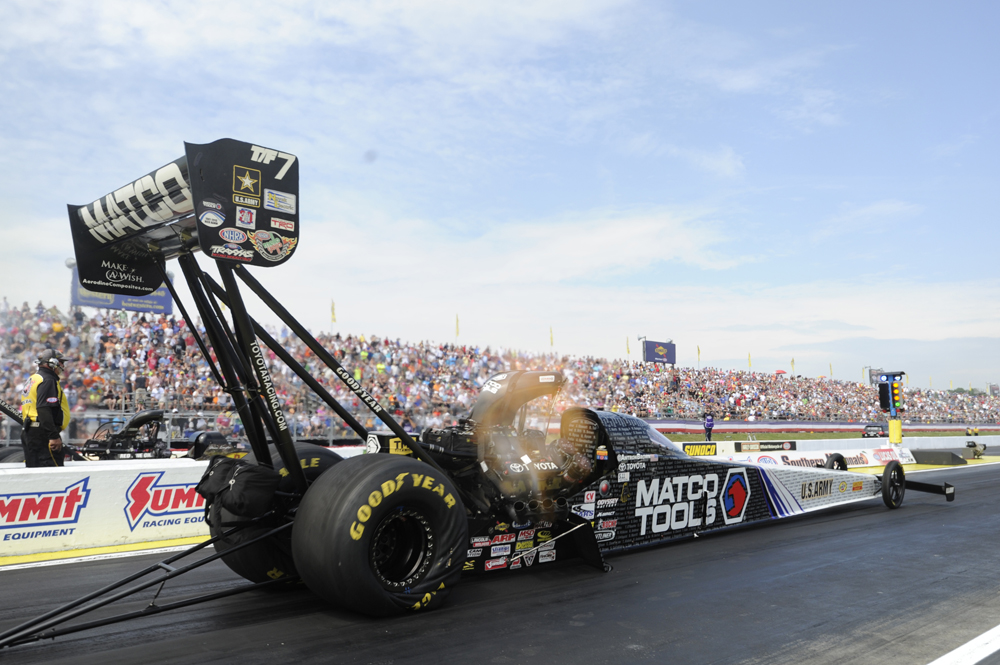 Despite the hot and humid conditions in Atlanta, GA, Top Fuel driver Antron Brown accomplished a most impressive task throughout the three days of the NHRA Southern Nationals.

Led by crew chiefs Brian Corradi and Mark Oswald, the Matco Tools team had the dominant car all weekend in the seventh event of the Mello Yello season.  Brown drove the quickest car in each of four qualifying sessions and was never challenged in eliminations on Sunday.

“Friday, the first run out of the box set the tone for the weekend,” Brown said.  “We were able to build and get data on runs in those different temperatures.  Our crew chiefs and all of our Matco boys have been putting the work in, all of us together and this weekend it paid off. 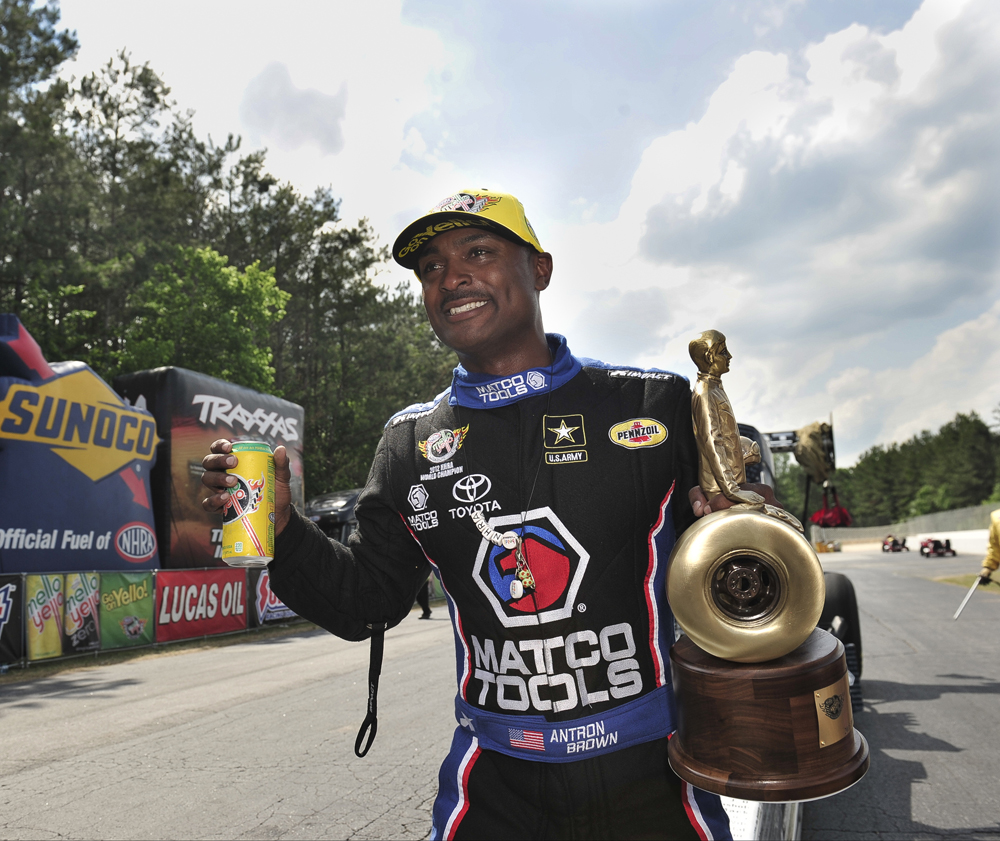 “The track got really, really hot and it was tricky.  Today we had every kind of condition, like we had in qualifying.  In every round we had to make a strategic move and the car did exactly what it was supposed to do.  They were able to adapt to the different conditions today.”

Brown defeated Shawn Langdon, Doug Kalitta, Terry McMillen and Leah Pritchett  to claim his second title of the year, 49th of his career and 33rd in Top Fuel.  It is the sixth time he’s left Atlanta Dragway with an NHRA Wally Trophy, including  three Pro Stock Motorcycle wins, tying him with Don ‘The Snake’ Prudhomme on the all-time wins list.

The team, however, was nearly sidelined by an errant screw that its left-rear tire picked up going from the pits to the staging lanes for the second round.  But alert Matco tire specialist, Matt Sackman, he discovered the rubber piercing item and the team was able to retrieve a new one and replace it with a few moments before the call went out to start engines.

“We just took one step at a time and these guys are very thorough.  The things that they caught could have cost us the race and that’s the making of the championship team.  We know what it takes to win championships; we have to take it one race at a time, one round at a time.  That’s what we do.  We’re ready to get after it.  “I am just so blessed to be able to drive this car.” 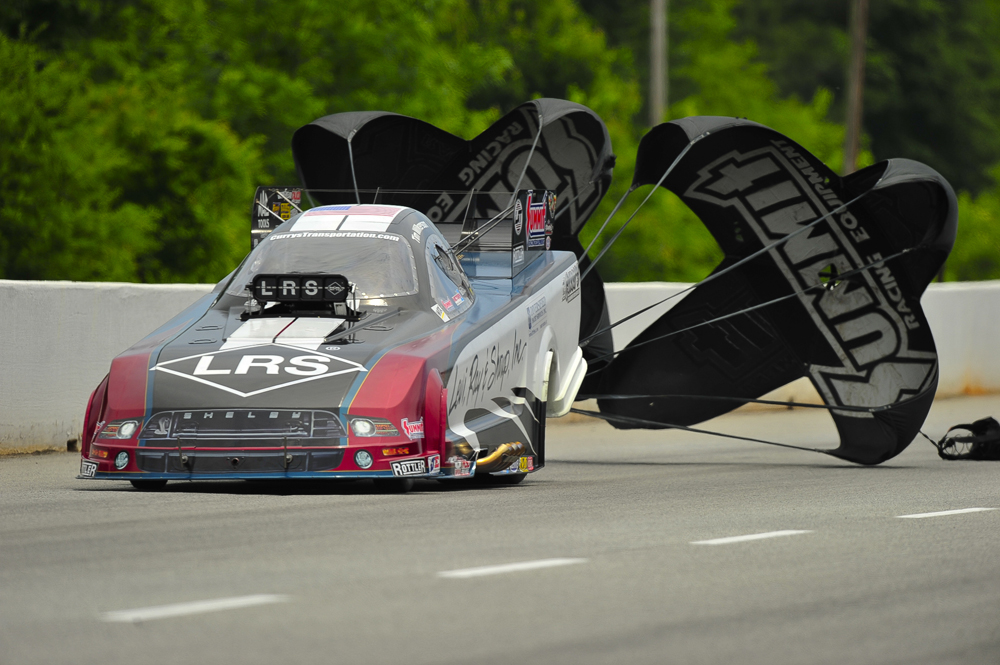 Tim Wilkerson has had a solid car most of this season, but an inch here and a foot there kept him from racking up the points he might have deserved.  But this weekend, he took out four of the best teams and drivers in the class, and earnestly celebrated with his young team after picking up his first win since Seattle in 2011.  It’s been nearly four years for the veteran Levi, Ray & Shoup driver, but the monkey is finally off his back.

Wilkerson faced off with Del Worsham in round one, and his 4.035 second pass left many in attendance speechless.

“We had that 4.03 up our sleeve if the conditions were right, and I think we all felt that we could win this race if we got by Del in that round,” Wilk said.  “The conditions were there, and it plowed right down there but not before scaring me a little when it hit that first bump and it hiked the front wheels so far off the ground I almost couldn’t see the track.  This chassis is just really forgiving, and it’s a great car.  It handled those bumps all weekend.”

In round two, facing Beckman, increasing track temperatures required a little more finesse.  Wilkerson powered past Beckman with another consistent 4.085 second pass to advance to his second semifinal on the year.  He took a little more out of his Ford in that semi, as the track temp rose into the 130-degree range, and his solid 4.163 at 300 mph was enough to power past John Force and into his first final since Bristol last year.  This time, he’d get his fourth big hitter in a row, as Ron Capps pulled up next to him.

“Man, that was a day full of tough ones, and it didn’t get any easier in the final, but I felt really good about it,” Tim Wilkerson said.  “We kept lane choice all day, and we stayed over there in the right lane.  I kind of felt like it was our day, but man you can’t help having those doubts because it’s been almost four years since we sealed one of these deals.” 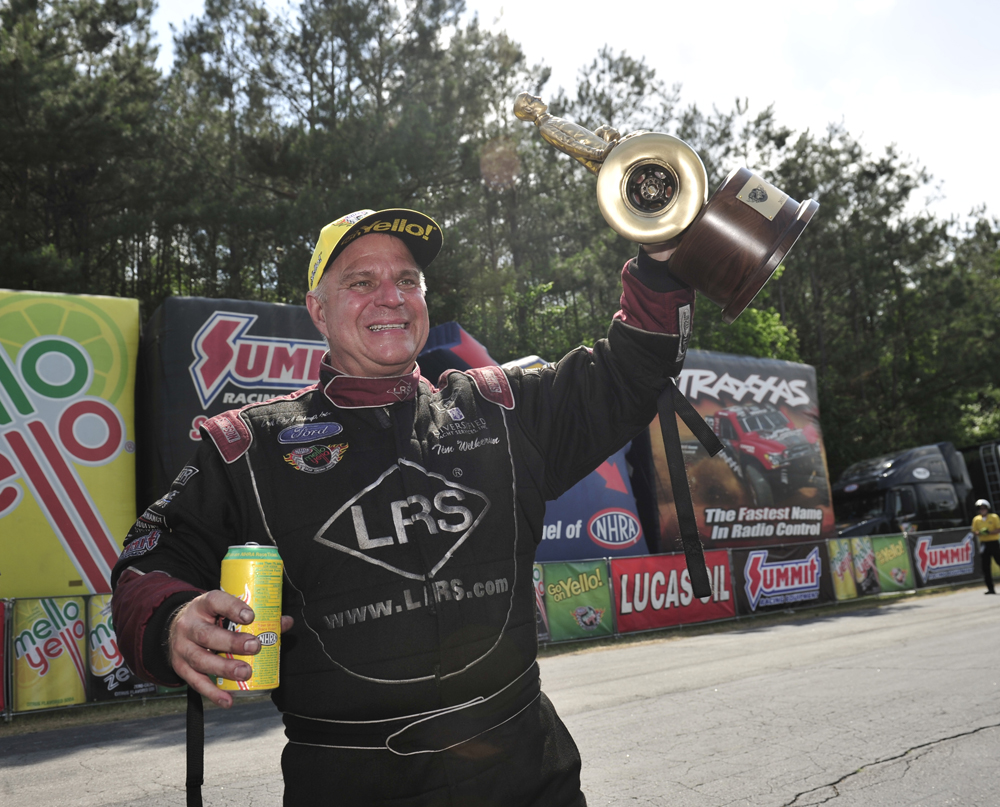 Both Capps and Wilk scrambled to get up to the line for the final and at the flash of amber, Capps smoked the tires hard around 330 feet, giving the Wilkerson team cause to celebrate, but then the Mustang began hazing the tires in the right lane.  Wilkerson kept his foot down, and nearly four years of frustration melted away.  His only “ugly” lap of the weekend, a 4.318 pass in the finals, was still good enough to easily conquer Capps’ run of 5.781 seconds in the left lane.

“I couldn’t believe it started spinning down there, but I wasn’t lifting,” Wilkerson said.  “I heard Richard Hartman on the radio, and I heard the guys yelling and screaming, and I’ll admit I had to take a minute and wipe away a few tears before I got out of the car.  Big day all-around, I’d say.

“Richard Hartman joined us this year, and his addition to this team is enormous.  We have a great rapport, and it’s getting better every race.  I actually didn’t know that Richard had never ever been a part of a win here in NHRA, and he was as emotional as I was at the top end.  My boy Daniel was here with us and it was emotional for him too.  Heck, it was truly emotional for each and every one of us.  I can’t be any more proud of this group.  They earned every bit of this.”  It was Wilkerson’s 18th career Funny Car victory. 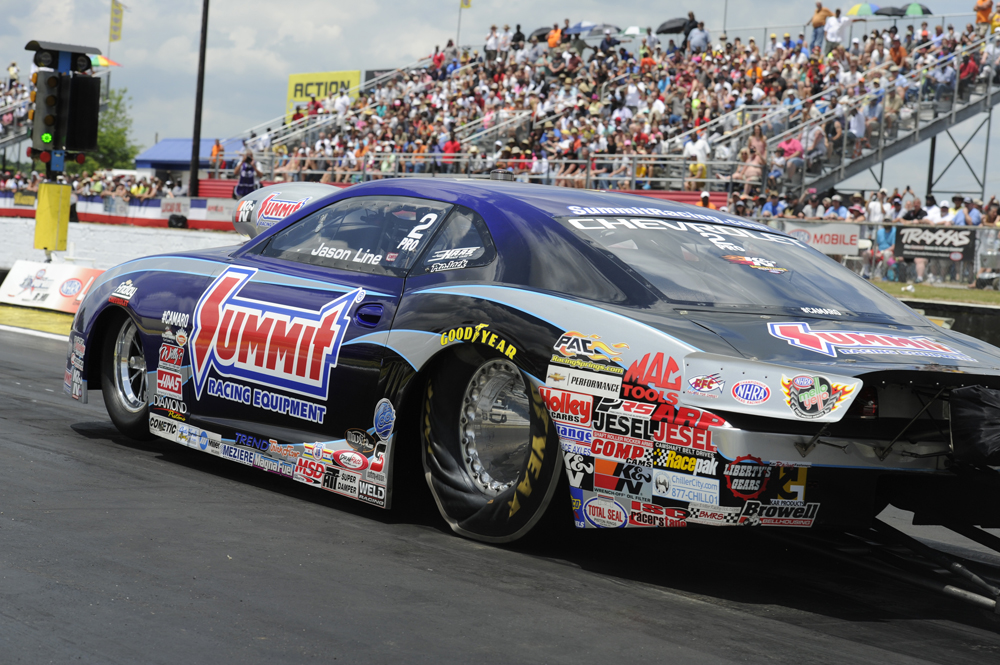 In a final-round battle between KB Racing teammates, Jason Line came out on top and scored the 37th Pro Stock title of his career, defeating Greg Anderson.  It was the fourth all-Summit Pro Stock final in Atlanta and the 24th time Line and Anderson have gone head-to-head for the title.

“Today was a great day for Summit Racing, and it was also a great day for KB Racing,” said Line, who now has two wins in the Peach State in six Atlanta final rounds.  “It’s the way you picture it, the way you dream of it happening.  It usually doesn’t end up that way, but today it did.  It was a phenomenal day.”

Line, the No. 1 qualifier, began eliminations with a winning 6.576-second pass at 210.50 mph as first-round opponent Alan Prusiensky fouled out.  With lane choice, Line held an advantage over long-time Pro Stock runner Larry Morgan extending his lead as the two raced down the quarter-mile dragstrip advancing with a hole shot win of 6.573 seconds, 210.64 mph run to Morgan’s quicker 6.565, 212.29.

In the semifinals, the two-time NHRA Pro Stock champion Line squared off with Rodger Brogdon running a pass of 6.585 seconds, 211.39 mph getting the job done.  From there, it was on to the final, where Line would forfeit lane choice to KB Racing teammate Anderson.

Although Anderson had the car to beat all day long, recording low ET through each round of eliminations, it was Line with the upper hand this time around.  Anderson left first, .013 – .057, but a minor mechanical issue shockingly slowed his red Summit Racing Camaro.  Line surged ahead for a winning run of 6.606 seconds, 211.33 mph victory over Anderson’s run of 8.628 seconds, 114.39 mph.

“There have been plenty of times when I’ve done a really good job and had a great car but lost, and today 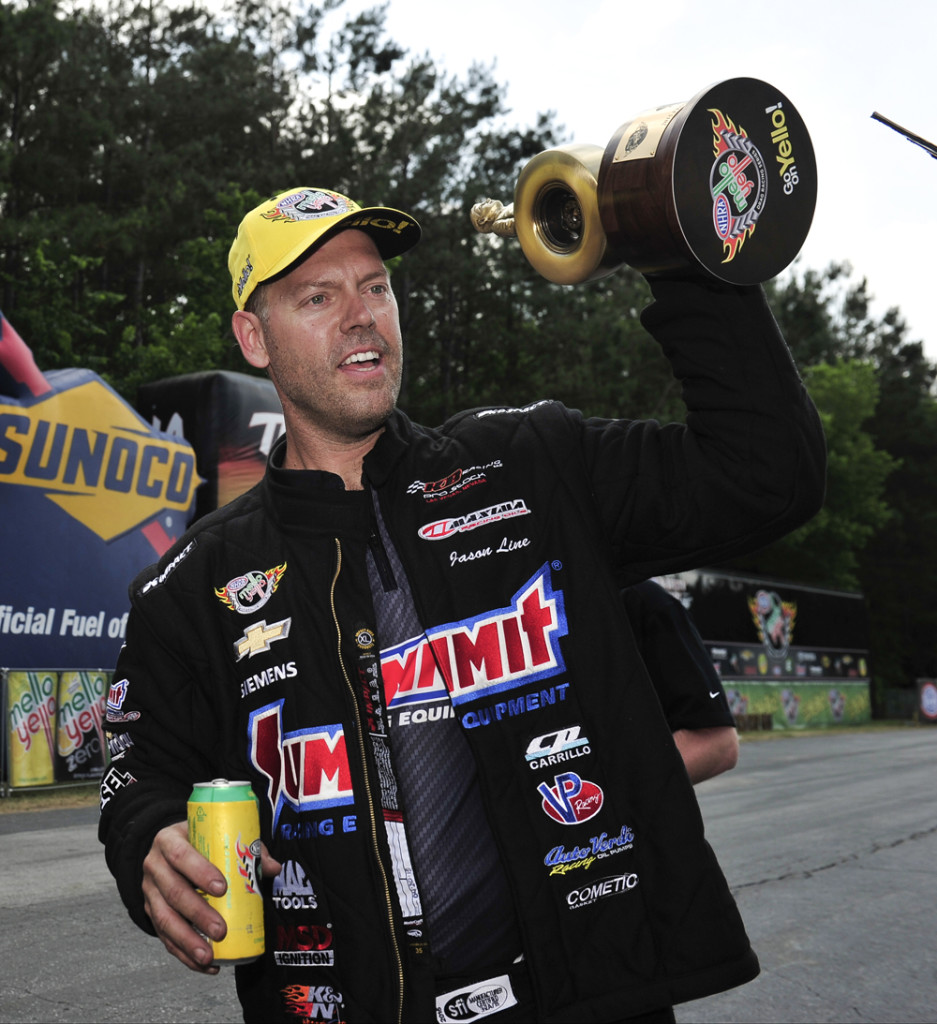 was different – I got a little bit lucky,” admitted Line, who earned his third consecutive No. 1 for the season in Atlanta and the 41st low qualifier award of his career.  “I was fast in qualifying, but today I wasn’t fast.  Today I had some good fortune.  Greg was really fast and had the car to beat, and he was driving better than anyone else out here.  He should have won, but this time I was the lucky guy.”

The final outcome of the day was nearly disrupted in the first round when Anderson’s throttle revved high on the burnout and would not settle.  A quick-thinking crew member jumped in with a solution to a problem that seemed, for the moment, insurmountable.

“DJ Minter saved our bacon today,” said Line, who took over the points lead with the victory.  “Before we raced the final, I told Greg that no matter what happens today, we were giving the trophy to DJ.  He’s a heck of a good worker, and a heck of a good guy. He had his thinking cap on and fixed the problem, otherwise we wouldn’t have had two Summit Racing Camaros in the final.  I thank him for that and it feels awful good to win, and we’re really happy we were able to get the job done here today.” 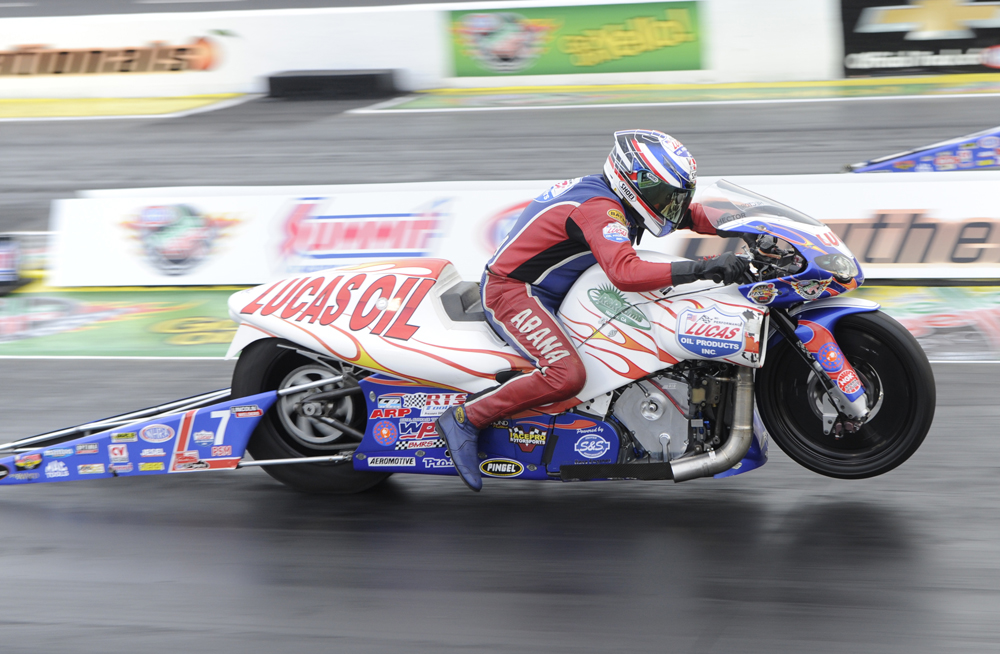 Hector Arana earned his first win in Pro Stock Motorcycle since 2009 and seventh overall with a 7.236 at 196.30 on his Lucas Oil Buell to beat 2014 event winner Eddie Krawiec, who’s Vance & Hines Harley-Davidson slowed near mid-track.

“I knew I could keep winning, but I had to believe in myself,” Arana said.  “In the final, the bike jumped like a bronco,” Arana said.  “It pulled to the right, but I was not giving up unless he was way in front of me.  As long as I had control of the bike, I was staying with it.” 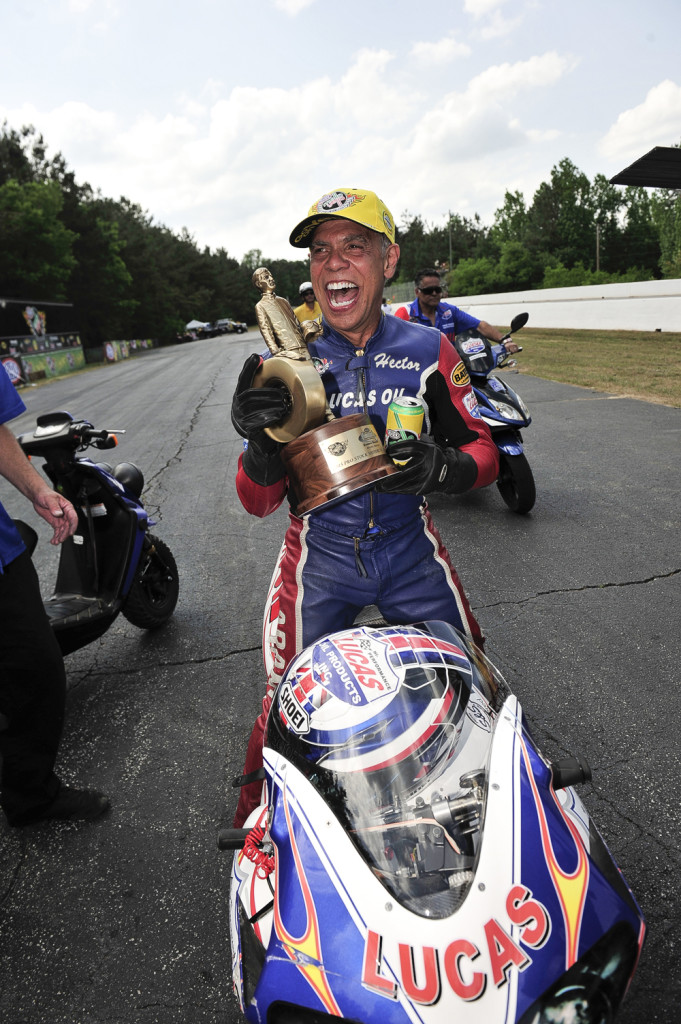 Arana defeated defending world champ Andrew Hines, Jim Underdahl and son Hector Arana Jr. to make it to the final round.  Arana was the seventh qualifier and holds the No. 3 spot in the points standing.

The NHRA tour continues next weekend with the running of the Kansas NHRA Nationals at Heartland Park Topeka on May 22 – 24.