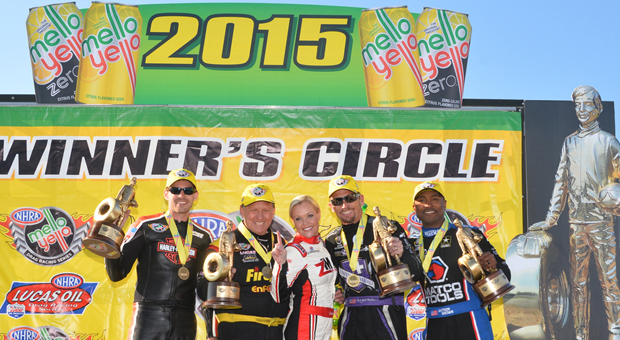 Under a Carolina blue sky, teams faced unusually cold late March weather and a new track surface at the NHRA 4-Wide Nationals at zMAX Dragway.  Antron Brown returned to the winner’s circle in Top Fuel and as did Funny Car’s Jack Beckman and Pro Stock’s Larry Morgan, while Andrew Hines and his Harley dominated in Pro Stock Motorcycle.

Fans may have mixed feelings on the 4-Wide format, but they packed ‘The Bellagio of Dragstrips,’ leaving the unprepared with standing room only tickets for the weekend.  Four times the normal action on the track proved irresistible. 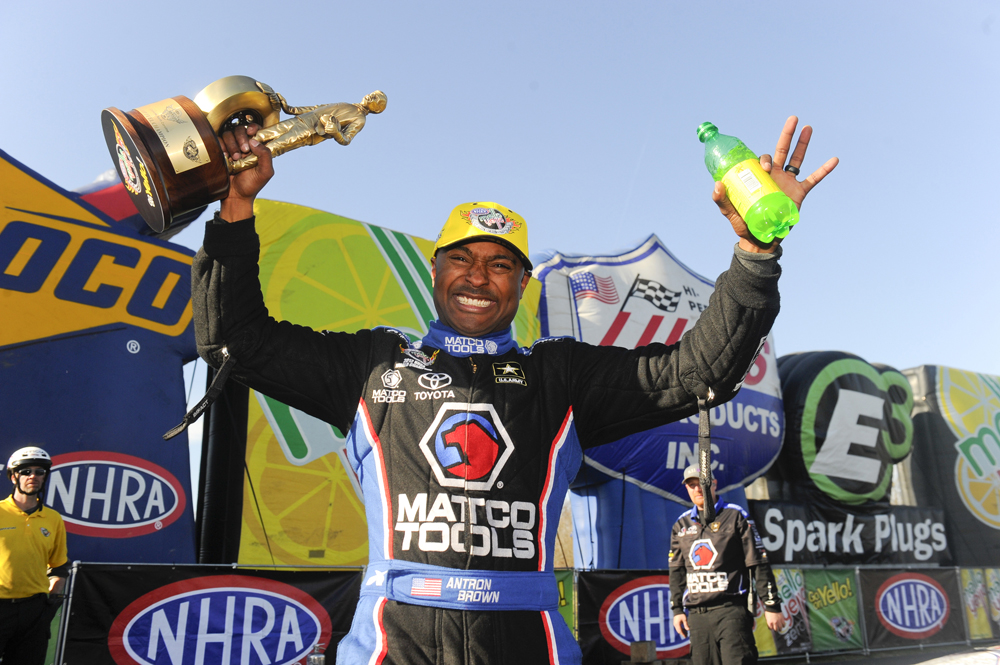 The Matco Tools team driven by Antron Brown pushed the limits Sunday’s and it paid off with the event title which also moved the team into the championship points lead.  But it wasn’t an easy road.

In the opening round of Sunday’s eliminations Brown, who qualified No. 8, was in a quad with some of the toughest competitors on the NHRA Mello Yello Drag Racing Series tour: No. 1 qualifier J.R. Todd, NHRA champion Shawn Langdon and Top Fuel rookie and standout Pro Stock racer Dave Connolly.

Brown’s team, led by crew chiefs Brian Corradi and Mark Oswald, won the first heat with a 3.771-second lap at 313 mph advancing to the second round with Connolly.

“That first quad was like an all-star event and then you go into the next round and it’s stacked up again,” said Brown.

The second quad turned into a pedal-fest with teams pushing the envelope on an 80-degree racetrack with air temperatures in the 50s.

“All of us knew what we had to run and we pushed the racetrack too hard because none of us made it 60-feet.  We were trying to run a 3.72 like the Sarge (Tony Schumacher) does.  We snuck around that round and came back for the final.  Brian and Mark made the right call and we ran low ET of that round and we did what we needed to do to win that race.”

Brown posted their best elapsed time of the weekend in the final round with a 3.749-second pass at 319 mph to earn his first win of the 2015 NHRA Mello Yello season.  It was his 48th career win, 32nd in the Top Fuel category and he has won at least one event title in each year of his Top Fuel competition since he switched from the Pro Stock Motorcycle class in 2008.  The DSR Top Fuel team also earned the Four-Wide title last year.

“It has been an incredible run for us at this race,” Antron said.  “The reason we love coming here is because the fans get really, really excited about it and plus this is the only time we come out and have a battle royal with nitro cars.  It’s insane, there’s a lot going on.

“You have to run a four-lane racetrack and we had two runs to try and get used to four lanes,” Antron said referring to Friday’s washout that cancelled two qualifying sessions.  “The good part is it really helps out with our multiple teams at DSR, our other dragsters had different lanes than we had.  We can lean on our Funny Car teams too.”

The Don Schumacher Racing organization embodies the “One Team” slogan commonly used throughout the shop in Brownsburg, Ind.

“Don has put all the right people in all the right places.  We are able to lean on each other.  Our deal is we have an open door policy.  We have grown as a tight knit unit and we’ve been able to grow together.  We work hard together, we learn together.

“To sneak out with it this year, it was definitely a long road.  We’ve been fighting some new combinations, some gremlins in our car.  It felt really good to go out there and run good in that last run and get the win.”

DSR enjoyed its third consecutive double-up of 2015 on Sunday with Jack Beckman taking the Funny Car title as well; marking the 47th time DSR has collected more than one trophy at an event. 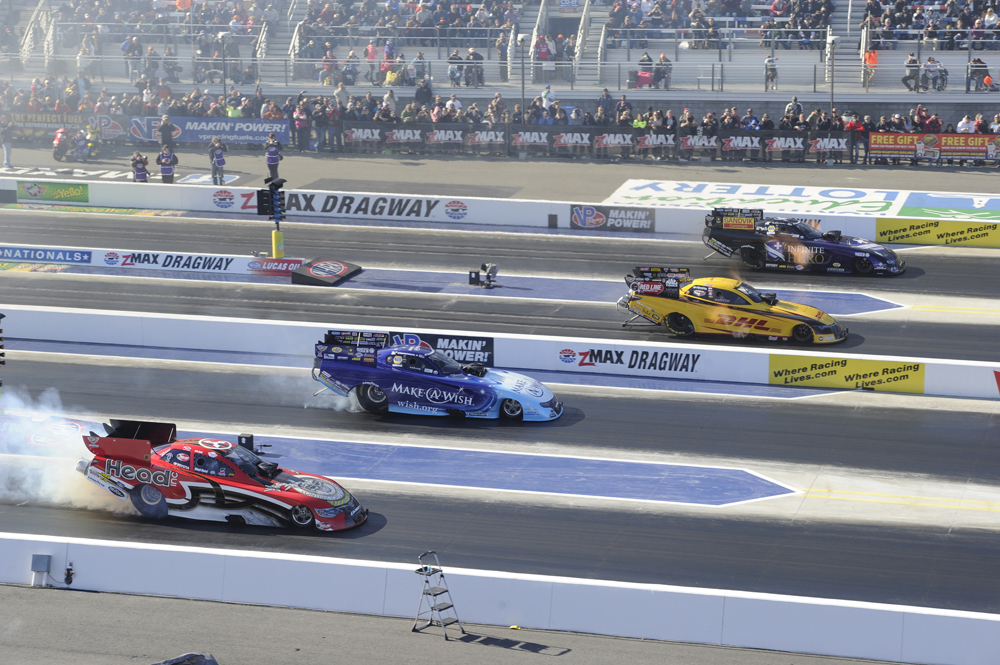 For Jack Beckman, the wait was worth it.  He snagged his last Wally nearly 7 years ago, in September 2012,  on his way to win the year’s Funny Car world championship for Don Schumacher Racing.

At that time, Beckman’s son was 5 and called the trophy a “Wowie.” “He’s so much older now that he can call it a ‘Wally,'” a somewhat dumfounded Beckman said.

“It hasn’t sunk it yet. This all feels surreal.”  And just like that race near St. Louis in 2012, he shared the podium with DSR teammate Antron Brown, both going on to win their respective NHRA world championships.

Beckman drove his nitro machine to the quickest run of the weekend in the finals to take the victory over rival finalists Del Worsham, Chad Head and Tommy Johnson Jr.  He pulled away from the pack with a final round performance of 3.983 seconds at 308.78 mph, his career best, at the controls of his Infinite Hero Dodge Charger.

The win also shot Beckman from 14th to seventh in Mello Yello points after four races.

“Toward the end of last year we didn’t even know if we’d have a team, and I thought I might be going back to working on elevators,” he said.  “But then Terry Chandler decided to fund our team to benefit the Infinite Hero Foundation and continue supporting our Make-A-Wish team (with driver Tommy Johnson Jr.).

“Without Terry supporting this team I might not have had the chance to win this trophy but I also might have had to get a real job.”

It was a day filled with milestones for DSR, which included Beckman earning the organization its 100th Funny Car. 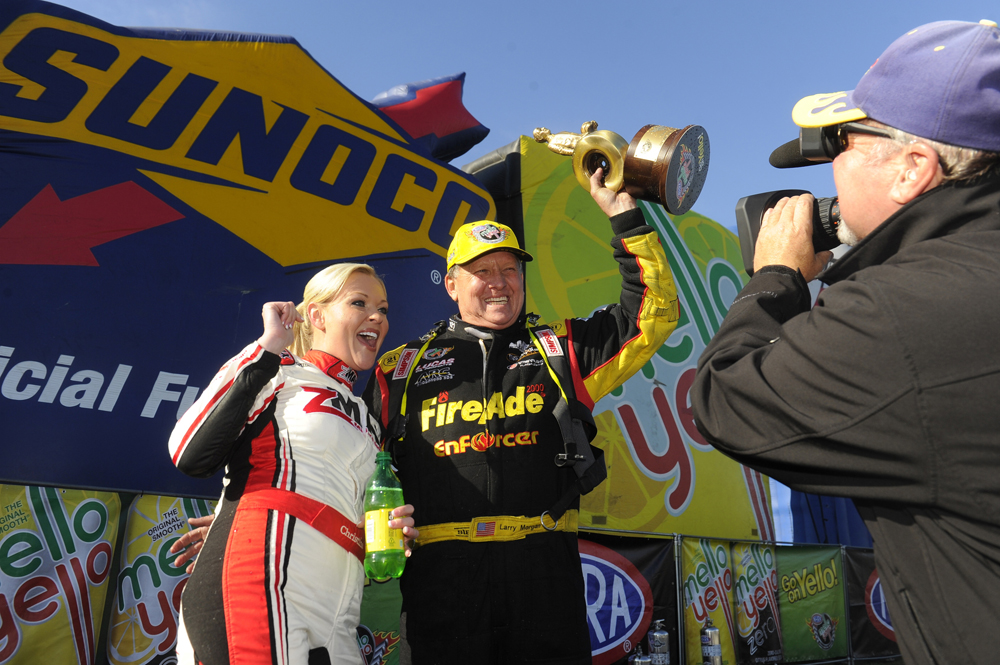 For Larry Morgan, his Wally drought is over.  The veteran Pro Stock campaigner scored a victory at the on Sunday, driving his FireAde Chevrolet to the winner’s circle for the first time since October 2009 in Las Vegas.

“I couldn’t be happier,” Morgan said.  “I’ve won a lot of races, but this has to be one of the best ones I’ve ever won.”

The victory was Morgan’s 11th in Pro Stock but his first since aligning with Gray Motorsports.  Gray Motorsports supplies engines and technical support to Larry Morgan Racing.  Morgan has had some lean years since his last win.  His most recent final-round appearance came in 2011 as he struggled with his underfunded, independent team, but his driving was still as good as anyone in Pro Stock, even if he couldn’t always show it.

“I knew I could drive,” Morgan said.  “I’m still good enough that I can still let the clutch out.  The only thing I was worried about was getting the funding to do it.  I knew I was capable and I knew getting into a Camaro, getting hooked up with Johnny (Gray), and getting all the support I get from FireAde was going to be good.”

The alliance with Gray has allowed Morgan to shift his focus from worrying about whether he had enough horsepower to worrying about driving his race car.

“I’ve just got to drive the car,” Morgan said.  “If there’s something I don’t see that I don’t like, I can overrule what they decide to do.  But those guys are really good at what they do, and they do a fabulous job.  It showed today.”

Morgan was terrific on Sunday.  In the first round, he had the best reaction time in his quad, leaving with a .006-second light.  His pass of 6.501 seconds at 214.42 mph was quick enough to finish second and advance to the second round.

Lining up against Greg Anderson, Jonathan Gray, and Vincent Nobile, the 60-year-old Morgan was quickest on the Christmas Tree (.006) and quickest on the track (6.464 at 214.52 mph) to win the race.

“When it comes to racing on Sunday, you better get after it or you won’t be here,” Morgan said.  “I told them, ‘This is what we’re going to do.’  We made the changes and it picked up to a .46 the next run.  Everything turned out perfect for us.” 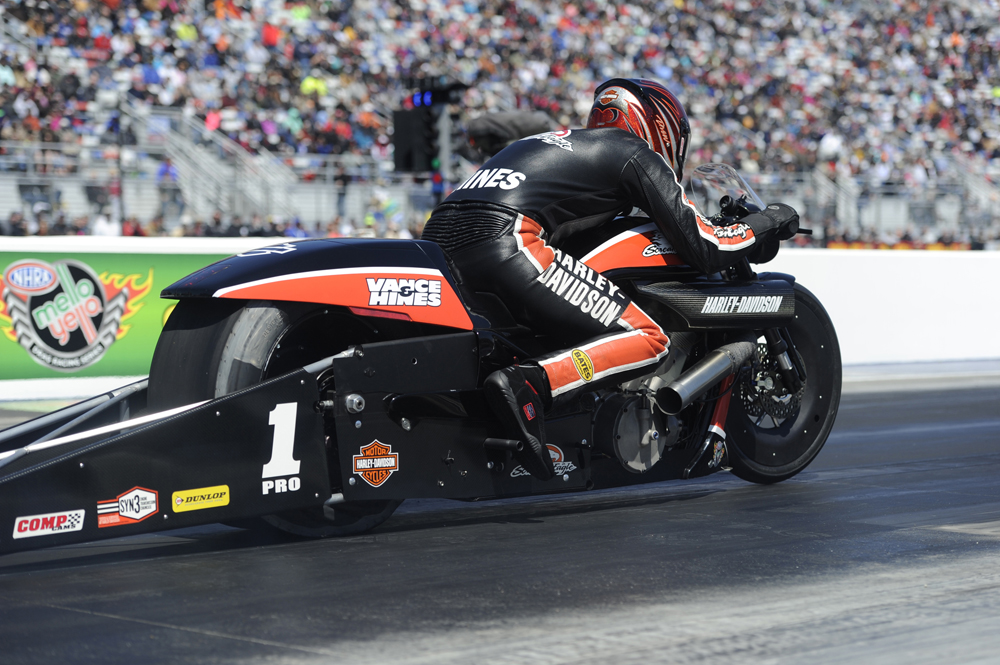 In Pro Stock Motorcycle, reigning world champ Andrew Hines claimed his first win of the season and 39th of his career by outrunning Eddie Krawiec, Scotty Pollacheck and Hector Arana Jr.  Hines claimed his second Four-Wide victory and his fourth at this track with a winning performance of 6.805 at 196.30 on his Screamin’ Eagle Vance & Hines Harley-Davidson.

“We got on the dyno last week and tried a few things,” Hines said.  “We followed through and my V-Rod got us to the final round.  We just went out and did what our team does best.”

Hines won his first round quad over Mike Berry, Brian Pretzel and Karen Stoffer and also finished first in the second round quad by outrunning Scotty Pollacheck, Berry and Matt Smith.

Krawiec moved into the series lead with his second consecutive runner-up finish of the season and Hines is second overall in the series standings.