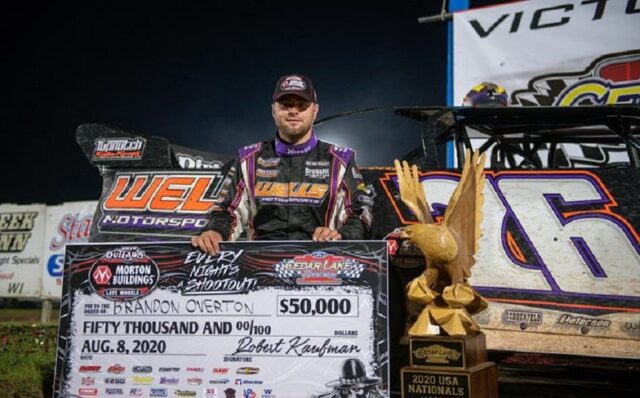 World of Outlaws Morton Buildings Late Models driver Brandon Overton rose through the ranks into contention as one of the best dirt late model drivers in the country after winning his first career USA Nationals title at Cedar Lake Speedway.

After starting Saturday night’s 100 Lap feature in the Top 5, the newest well known dirt driver from Georgia quickly made his way to the second spot by lap nine and followed suit with pole sitter and leader, Billy Moyer. While the track continued to widen out, Overton bided his time behind Moyer, sitting through a few rounds of lap traffic, before waiting to pounce when the time was right.

With the help of lapped traffic Overton saw the perfect opportunity to make his move on lap 44.

“I was riding around, and I could see the top kind of die off, then the bottom came in,” Overton said on track conditions. “Then I could see the bottom die off and I had to move up. I kind of knew both routes, like which line I needed to use, and my car was really good there through the middle. Funny thing is, I was like a half-second slow in hot laps tonight and I thought we were terrible. Everything worked out though even though I was trying to manage my tires all race long.”

While Overton seemed to have a hold on this race for the next few laps, his biggest nightmare seemed to come on Lap 56 when 2018 USA Nationals winner and reigning World of Outlaws Late Models champion, Brandon Sheppard, roared into second place after starting outside the Top 10. Although Overton was probably shaking in his racing shoes when he heard who was behind him, Sheppard’s attempt to take the lead would fall flat on lap 85 after his No. 1 Rocket Racing ride would go up in a ball of smoke. As Sheppard’s attempts to stop Overton would go up in flames as he was pushed back to the pits with motor trouble, the field behind Overton would be all shook up.

After Overton roared ahead of the rest of the pack none of the veterans entering the mix or the legends still in play could throw anything at derailing the No. 76. In fact, the young blood thirsty driver continued to control the last segment and drove away to a 2.213-second advantage at the checkered flag with $50,000 and his first career USA Nationals title waiting for him in victory lane. 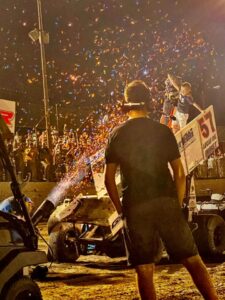 “This was one of the coolest nights of my life,” said Overton. “It is such an honor to race against talented drivers like Brandon Sheppard and Jimmy Owens. “I have got a lot of catching up to do if I am going to be as good as those two are though. All we can do is keep going and trying our best to keep winning.”

Overton would not be the only World of Outlaws driver to finish his weekend with a reason to celebrate. At this weekend’s World of Outlaws NOS Energy Drink Sprint Cars Ironman 55 a hungry and hard-charging Kyle Larson made winning look easy at Federated Auto Parts Raceway at I-55.

After starting on the pole for this 55-lap race, Larson would already have to wrestling his own car around the fast 1/3-mile track with a cushion that was unforgiving if not treated with care all while fending off a field of 24 competitors.

Larson would lead the first four laps of the Feature but bicycled off the cushion in Turn 4 and allowed second-place Jacob Allen to close on him. Allen then dove underneath Larson entering Turn 3 and slid in front of him to officially take the lead on lap 5.

However, Larson closed back in on the Drydene #1A in traffic. Allen continued to prove his strength by holding off attacks by Larson lap after lap.

While they battled, Shane Stewart, in third, closed in. With 39 laps still to go, Stewart launched his Indy Race Parts #71 under both Larson and Allen in Turn 1 and sped down the backstretch with the lead.

For the next 34 laps, Stewart – the 2015 Ironman – held command out front. Behind him, Allen, Larson, Haudenschild and two-time Ironman champion Rico Abreu brawled for second. Larson nearly saw his night come to an end while battling with Abreu for second.

Abreu threw his car underneath Larson entering Turn 1, feeding Larson his right rear and sending the white #57 up the track and into the cushion. Larson’s rear end bounced off the cushion, sending his car sideways and facing the inside wall. He perfected a brilliant save and only lost one position to Haudenschild. With 20 laps to go, the track conformed to Larson’s liking and he took off for the checkers.

With rain minutes away, the laps still showing five to go and Larson out front with a hungry and determined Haudenschild behind him, the conclusion to the Ironman left everyone at the edge of their seat.

Larson’s Ironman win is his 13th career World of Outlaws victory – tying him with Brooke Tatnell and Terry McCarl for 34th on the all-time wins list – and his fifth win of the year – second at I-55 this year.

“That was hard work,” said Larson, who looked to have just finished running a marathon. “I am normally pretty calm after racing, but this race had my blood pumping. I cannot say enough about everyone who helps out on this team. I tore up a car at Huset’s Speedway last week and these guys worked their asses off all week to get it ready and I can’t thank my guys for getting this car up to winning style for this race.”

A big CONGRATS goes out to these hard-working drivers from all of us here at RacingJunk.com!! Stay tuned as the champions of the World of Outlaws Late Models and Sprint Car Series continue to blow doors off at tracks throughout the country.