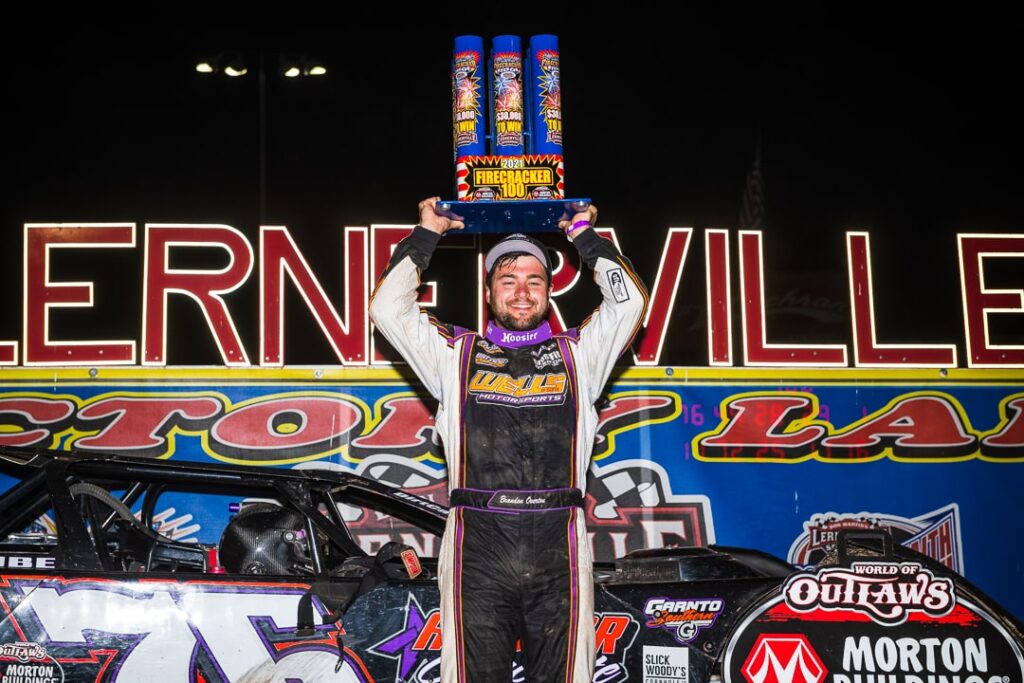 In one of the hottest race weekends for the World of Outlaws Morton Buildings late model season, one driver would burn brighter than any other. After kicking off Firecracker 100 weekend with a fifth starting spot, which would eventually lead to the first of two Feature race victories at Lernerville Speedway, Evans, GA’s own Brandon Overton wouldn’t let anything stop him from racing to a victory at the same track he won his first crown jewel event at in 2017.

Despite The Rocket Brandon Sheppard earning the first victory, on Thursday, the wave of the green flag on Friday night would give Overton just the charge that he needed to dominate the remainder of the race weekend. Even though Overton stood tall at the end of the night, the changes he made for the Heat Race pointed him in the right direction.

“We just threw some things at it and didn’t really know what to expect,” said Overton. Fortunately, the changes that were made to Overton’s No. 76 roar of a ride gave him just the kind of spark that he and his team found when earning the victory Dirt Late Model Dream Races at Tony Stewart’s Eldora Speedway. This spark ignited the first of two Firecracker 100 victories in Friday night’s final 16 laps. While his first Firecracker 100 victory was an exciting one, there was nothing like Saturday night’s 100 lap feature.

Starting inside the top 5, behind pole-sitter Cade Dillard, and drivers like Chris Madden and Mason Zeigler, Overton bided his time at the start of the Feature. He dropped to fifth but worked his way back to second in the first 30 laps. Shortly after the driver they call “Big Sexy” caught race leader Chris Madden and made his way past him on Lap 41.

While he would run into lapped traffic and his car “started darting like crazy” within the final laps of this race, Overton hung on for the final Firecracker 100 win.

“I am just so relieved to finish this weekend on top,” said Overton. “The car was darting like crazy, and I was just waiting any minute for something to happen because our luck has been too good for nothing to go wrong. Fortunately, I was able to hang on and win another one at a place that is very special to me and with a new team is something that I will never forget.”

While the World of Outlaws Morton Buildings Late Models will take a break during the 4th of July weekend, the Series will start its Northern swing with a doubleheader at Jackson Motorplex in Jackson, MN on July 9-10. Stay tuned to RacingJunk.com for all of the latest racing news from the dirt.