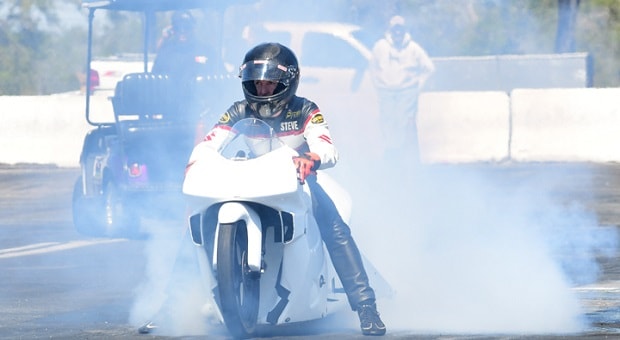 With the third race of the year set for this weekend in Gainesville, Fla., NHRA Mello Yello and E3 Spark Plugs Pro Mod racers are prepping for battle. The 49th Amalie Oil NHRA Gatornationals are the first race for Pro Stock Motorcycle and Pro Mod, so many of the riders and drivers took the opportunity to get some laps in before they go racing.

There were several entrants in the new Factory Stock Showdown category, including 2012 Pro Stock champ Allen Johnson, making a competition return in that class. His Dodge Challenger was having teething difficulties and Johnson hopped down the track a few times. Others did better, including the two-car Skillman Ford Mustang entries. The time to beat appeared to be a 7.99 pass, but most cars were running the quarter-mile in the 8.10-8.15-second bracket.

The sole Pro Stock Motorcycle rider team on-hand at this track – many others were testing and tuning in Orlando – was 2016 category champions WAR Racing, with champ Jerry Savoie and new rider Steve Johnson. The latter, who has always run his own team, elected to work with WAR this year when the second Suzuki became available.

WAR Racing, who leased their second Suzuki motorcycle to LE Tonglet last year, couldn’t hold off on plans and had to make a decision, as Tonglet’s sponsor Nitro Fish kept hesitating. When Johnson became available, Savoie and team manager Timothy Kulungian chose to work with the veteran, who brings vast experience to the team and worked with Kulungian for more than a decade.

Johnson, now riding a very different Suzuki from the one he’s campaigned for years, took his first five laps on Tuesday in preparation for the weekend, which boasts 20 entries in the two-wheel class. He made five passes down the quarter-mile; three of them stuck well as he turned 6.989/191.89, 6.887/104.21 and a final run of 6.890/196.07, getting to know the different variables of his new motorcycle.

On a cool and clear Wednesday morning, the Pro Stock contingent began to make their presence known with a couple of passes under the 6.5-second mark. McGaha was first to get to 6.495 and was quickly followed by Vincent Nobile followed with a 6.493 pass with a 0.07 reaction time. No doubt the times will be lowered again before everyone packs up and heads up I-75 for the race.