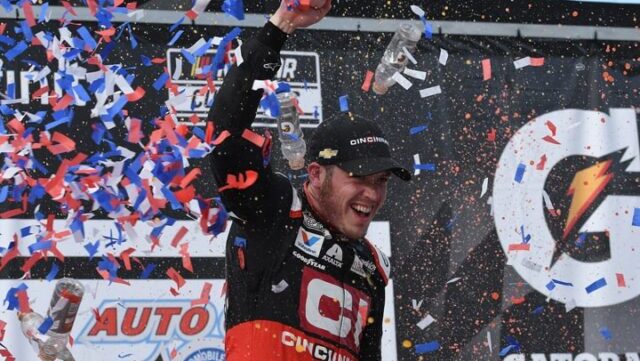 It’s been a long time since I’ve had the opportunity to work a NASCAR Cup Series race at Auto Club Speedway in Fontana, Calif. There’s usually a conflict with NHRA, INDYCAR or IMSA; this year there was none.

The weekend moved at snail’s pace until Sunday. Both the Cup Series and Xfinity Series had practices on Friday, both qualified and the Xfinity Series raced on Saturday, leaving Sunday strictly for NASCAR’s biggest stars to take center stage, along with some sports and Hollywood stars, many of whom came to see what could be seven-time series champ Jimmie Johnson’s final race at his home track. 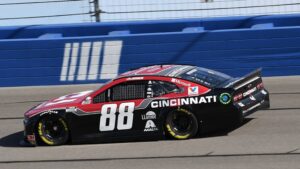 NASCAR rolled out its red carpet for all of them, celebrating Johnson’s stellar stay in stock car country with a commemorative mural, having off-road motorcycle mentor Ricky Johnson (no relation) drive the pace vehicle, having his wife Chandra and two daughters (Genevieve and Lydia) on the start stand wave the green flag after a five-wide salute with second-starting Johnson behind the pace car – and there were likely some tributes I missed over the three-day weekend.

Johnson’s Ally Chevrolet from Hendrick Motorsports had a great qualifying lap on Saturday and gained the second starting spot behind only Stewart-Haas Racing’s Clint Bowyer and his Ford. Magnificent weather on both Friday and Saturday set the stage for a great 200-lap contest on Sunday’s 24th annual Auto Club 400-mile race.

Nobody told the weather forecasters, who predicted the third rainout for NASCAR’s premier series in its third 2020 contest.The impounded cars were rolled out to pit road a couple of hours before the 12:46PM green flags were scheduled to fly and were quickly covered as sprinkles hit the area. Still, the fans continued file in and, by the time the prayers were said and anthem sung, it was apparent that, rain or shine, Californians wanted to see a NASCAR race.

No, the stands weren’t filled to excess, but the infield was jammed with happy campers and the grandstands on the front straight looked about 3/4-full. A lot of enthusiasm showed in the number of suites occupied as well as a variety of trackside suites for car sponsors with their guests. 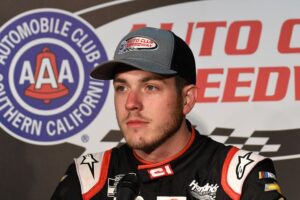 The weather cooperated. Despite spraying some drops of water here and there in the minutes leading up to the green flags, the race went to its full, 200-lap conclusion with only three caution periods: two for the ending of Stages 1 and 2 and a single incident for pole man Bowyer’s lap 94-95 incident when a tire went flat due to a broken inner valve stem, right after his pit stop. Bowyer eventually finished 23rd with a very tight car keeping him off the lead lap. In fact, only 16 of 38 cars finished all 200 laps and there was a single retirement when the No. 95 Rheem Toyota of Christopher Bell lost its engine on the 81st lap.

Bowman was one of the few racers who didn’t experience difficulties with his right rear tire, thanking crew chief Greg Ives for his advice to keep the tire intact in the final stint. “We’ve unloaded the last two weeks and I don’t think we have had to make a change to the race car from the way it came off the truck. That makes my job a lot easier. It comes down to a lot of great preparation in the shop, Greg making really good decisions with our package,” he said. 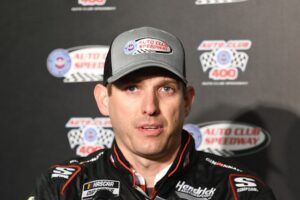 After starting third and finishing first and second in the first two stages of Sunday’s race, it was apparent Bowman was on track to finish well, if not first, but his 8.904-second margin of victory over Kyle Busch was a yawner, speaking to the competitiveness of Hendrick Motorsports and the Chevrolet Camaro this season. “The track was pretty cool,” Bowman allowed, “so the grip level was up. For five or six laps,” after the three cautions,” pretty much everybody could run wide open. It’s a culmination of pretty equal grip level from top to bottom here,” on a 2-mile track that’s never been resurfaced.

Now the circuit moves to its final winter event on the West Coast, having been to Las Vegas and Fontana. The one-mile oval at Phoenix is next week, which is Bowman’s home track and a circuit where Ives feels a lot of pressure to continue the No. 88 team’s strong performance. “My goal,” crew chief Ives said, “is to go out there, unload just as fast as we did here, execute a good race – and whatever happens at the end of the year is going to happen. We’ve got to learn, we’ve got to continue to grow, and that’s kind of my focus next week.”