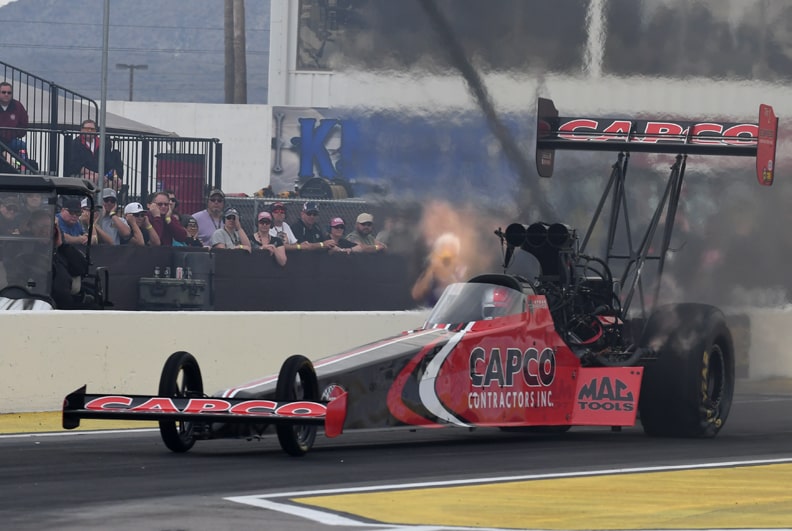 Most people are looking at the results from this past weekend’s NHRA Arizona Nationals at Wild Horse Pass Motorsports Park and focusing on the return of Steve Torrence. Granted, that’s a big deal and, as one who is not sure all the blame for last year’s season finale kerfuffle rests with the two-time Top Fuel champion, it was great to see “Them Capco Boys” back in action and showing why they’re the team to beat.

Steve Torrence’s team didn’t get the green hats for being No. 1 qualifiers; that went to Brittany Force’s John Force Racing squad, led by David Grubnic and Mac Savage. In the single qualifying effort on Saturday afternoon, following a long rain delay and exceptional cleanup by NHRA’s crack Safety Safari, she beat Torrence’s Friday time by .001 with a 3.670/327.11 pass down the 1,000-foot track. 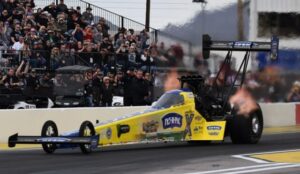 While that was plenty amazing, Force knew her Flav-R-Pac yellow and blue rail would be complemented far more by a yellow race-winner’s hat than the green No. 1 chapeaux. In the first round on Sunday, she showed the world how she thought she could do it, slamming down the right lane to a new national record of 3.643/337.92. Her drive for victory didn’t last long, as she was defeated by Pomona winner Doug Kalitta’s holeshot in the second round.

That left Steve Torrence, who beat an improving Jim Maroney in the first round, Shawn Langdon in the quarterfinals, to face and defeat his father in the semis and overtake a tire-hazing Kalitta in the final round. Torrence, who had parked his rig here in Phoenix for testing when others went to Las Vegas, was reported to have been making 3.6-second laps down the dragstrip throughout his testing time; he was ready to play once he and his team elected to rejoin the tour.

Probably the most excited of the Sunday members of NHRA’s Winner’s Circle was Tommy Johnson Jr., who took home his 18th career Funny Car victory, 20th pro victory and his second at this track; his first victory came in 2006. TJ’s win is the second this year for Don Schumacher Racing’s “giving cars” – sponsored by Doug Chandler in honor of his late wife Terry – as Jack Beckman won the Pomona round in his Infinite Hero Foundation Dodge Charger SRT Hellcat and Johnson brought home the hardware outside Phoenix in his MD Anderson Cancer Center Hellcat. 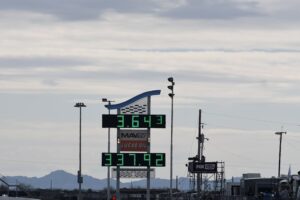 The duo met in the finals, meaning Chandler would be a winner no matter who reached the timing beams first. “There wasn’t going to be a loser,” Johnson said after the final round against Beckman. “Doug Chandler is supporting both these teams, and both are ‘giving cars’ and paying it forward so much.” Johnson, the No. 4 qualifier behind teammate Matt Hagan, John Force and Robert Hight of John Force Racing, was easily the most consistent Funny Car driver on race day, with every one of his four laps in the 3.8-second range.

“The last qualifying run showed us that we have a solid car,” he said of the black, red and white Hellcat tuned by John Collins and Rip Reynolds. “As a driver, going into each round knowing you have a car that’s going to perform makes your job a little easier; it gives you a little less stress.” Johnson beat Paul Lee’s Charger, set low of the round in the quarterfinals, even as opponent Bob Tasca III anticipated the Christmas Tree and fouled in his Ford Shelby Mustang, then beat teammate Ron Capps to face Pomona winner Beckman. A straight-up match was not in the cards. Beckman shook his tires 100 feet into the run and was unable to recover, giving Johnson his first win against a tough teammate. 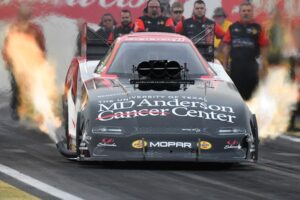 Johnson made his professional debut at this track, albeit in Top Fuel back in 1989. “I was very relieved when I turned the corner down there after the finals. It felt like it took a little bit of pressure off. We had such a good car last year and we didn’t finish well at all, so it feels good to come out strong and get that out of the way right off the bat – and know how good of a car you have. Now we shift to maintaining it.”

It’s apparent Elite Motorsports has their act together this year, as Pomona winner Jeg Coughlin Jr. had the fastest qualifying lap and teammate Erica Enders won the race, both driving Chevrolet Camaro Pro Stock race cars. In his second round match-up Coughlin, who skated through the first
race and looked ready to do the same here, had a slight engine issue that slowed him and allowed Elite’s Alex Laughlin to advance to the semifinal round.

Enders’ luck, after qualifying second, was superb. She started with a solid 6.532 lap against Fernando Cuadra Jr.’s Ford Mustang, had a single pass when Chris McGaha’s Camaro had issues after his burnout, took out Jason Line’s Summit Racing Camaro in a close, 10-inch photo finish and out-battled 2017 champ bo Butner under perfect conditions in a slightly less competitive race. In each Sunday contest, her Camaro raced in the .65s, with the finale her quickest lap of the day after each driver recorded the same .033-sec reaction time. 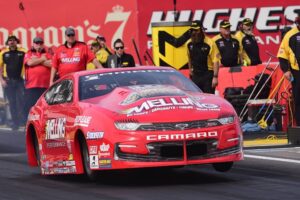 The three-time and reigning Pro Stock titleholder picked up her 26th class career victory in her 52nd final round. Enders’ consistency throughout this difficult race meeting, where Friday was chilly, Saturday was nearly doused by rain showers and Sunday offered exquisite racing conditions helped her find her way to Winner’s Circle early in the season. “For this red Melling Performance Camaro to come out on top and all the people who make it possible, is special,” she said.

“Today is my boss’ birthday and we said we were going to try to bring him a Wally (winner’s trophy) today, so happy birthday Richard Freeman! To start off the season like we have at Elite Motorsports, with Jeg’s dominating performance at Pomona and both of us and Alex (Laughlin) and Aaron Stanfield out of our camp running well this weekend, we’re excited.”

While the next NHRA Pro Stock race is the 51st Amalie Motor Oil NHRA Gatornationals March 13-15 at Gainesville Raceway, Enders has another race on her mind: the Drag Illustrated World Doorslammer Nationals March 6-8 at Orlando World Dragway. Offering a purse of more than $300,000 for racers in Pro Stock and Pro Mod, Enders is looking to add the $75,000 winner’s purse to her laurels; the Pro Mod winner gets $50,000.