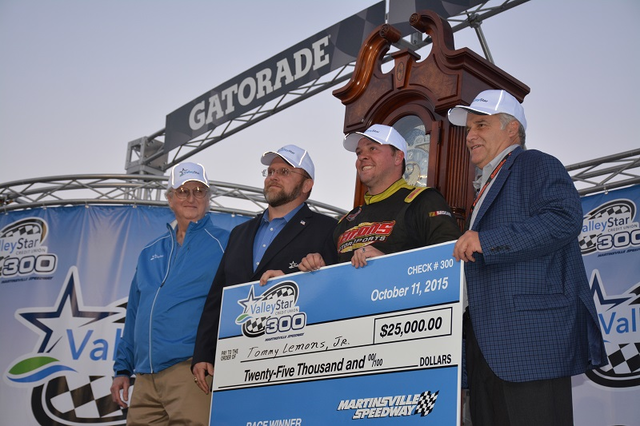 Although some stock car racing fans may be losing interest in the big leagues of this sport, those die-hard fans out there are continuing to flock to short tracks throughout the country.  For those who recently packed into the Southeast’s famous paperclip short track, Martinsville Speedway, for the largest late model race of the year, the name that was left on their lips was that of race winner Tommy Lemons, Jr.  After surviving yet another wild and confusing finish, this Troy, NC native took home his second grandfather clock, along with $25,000, after winning the Valley Star Credit Union 300.

After winning one of the most popular weekend warrior races in the Southeast for the second time, we at RacingJunk.com decided to slip Behind The Wheel with this dominating weekend warrior to find out how his winning ways began.

“When I was growing up, my father spent most of his weekends racing, which meant I was at the track pretty early in life,” said Lemons.  “Whether I was watching him compete in a drag, street stock, or late model car, I remember watching him and thinking I want to do that someday.”

Not only did this give Lemons, Jr. a desire to become a wheelman someday, but a legendary southern NASCAR Sprint Cup champion,  “If I wasn’t cheering for my dad, I was on the couch every Sunday watching my favorite NASCAR driver Dale Earnhardt,” said Lemons.  “He was the true Southern driver who did what it took to win and I just remember that I wanted to do the same if I ever had the right opportunity.”

Fortunately, the right opportunity did come along at the age of 12-years-old.  “Thanks to my dad, I was given the opportunity to start out in dirt go-karts in 1999,” said Lemons.

Lemons first four years in the sport were just the start to his winning ways.  “Although we didn’t choose to run one track for championship notoriety, we picked up several wins,” said Lemons.  “In fact, my final full season in 2002 was the most winning season, with over 60 wins.”

Although there are many winning drivers who begin their racing careers in a go-kart, there are few who are able to go from these minimally powered machines to a full bodied, full horsepower late model.  Despite having less than five years of competition under his belt, Lemons decided it was time that he began to see his NASCAR dreams to take shape.

“If I was going to have a shot at competing in the Sprint Cup Series someday, I knew that there was no better time to prove that I had what it took to win,” said Lemons.

At the tender age of 15-years-old, Lemons jumped behind the wheel of his first Limited Late Model and despite running on a limited basis at what Lemons still considers his home track, Caraway Speedway, the talented teen walked away with four top-5 finishes.

Lemons followed up his rookie start by becoming the youngest winning driver in a full-stock late model at Caraway Speedway.  “This is actually one of my favorite memories in racing,” said Lemons.

The talented late model star would see his success continue as he racked up both wins and top-finishes at both Caraway Speedway and Motor Mile Speedway for the next nine years.

Despite all his success, the Lemons name wouldn’t become truly noteworthy until the Fall of 2013.  “Winning the Virginia is for Racing Lovers 300 was such an amazing feeling,” said Lemons.  “I will never forget stepping onto that stage with my hard working team, especially my father, who was funding our team then as well.” 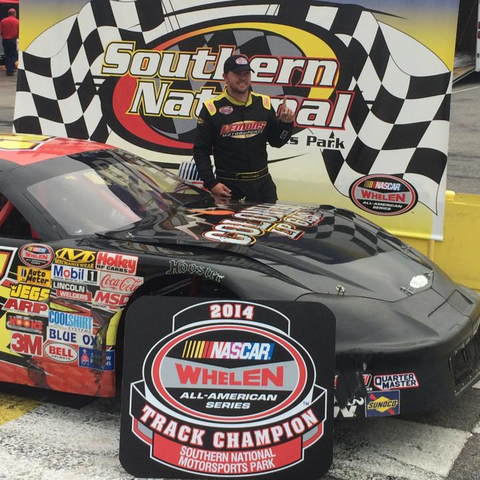 This fame wouldn’t be short lived as Lemons would follow-up his grandfather clock win with his first Late Model track championship at Lucama, NC’s claim to fame – Southern National Motorsports Park.  “Following up our first Martinsville win with this championship was such an amazing feeling,” said Lemons.  “It is actually one that I was proud to share with my father and what made me realize that I could pass this feeling along.”

Despite his wins increasing, including another grandfather clock in his possession this year, Lemons hasn’t quite seen his NASCAR Sprint Cup dreams come to fruition, but has begun to see another dream take shape.

“When my racing career began, all I wanted to do was to climb the ladder and become a famous NASCAR driver,” said Lemons.  “Today, I have a stronger desire to help others know what it feels like to win and maybe even see their own NASCAR dreams come true,” said Lemons.

“We, at Lemons Motorsports, are hoping to help other drivers get their feet wet and show them what they can do behind the wheel of these awesome machines,” said Lemons.

With a new baby on the way any day now, I am sure that we will see another famous Lemons driver taking the checkers at home tracks throughout the Southeast just a few years from now.

If you would like to see your favorite weekend warrior featured Behind The Wheel, contact us at [email protected].