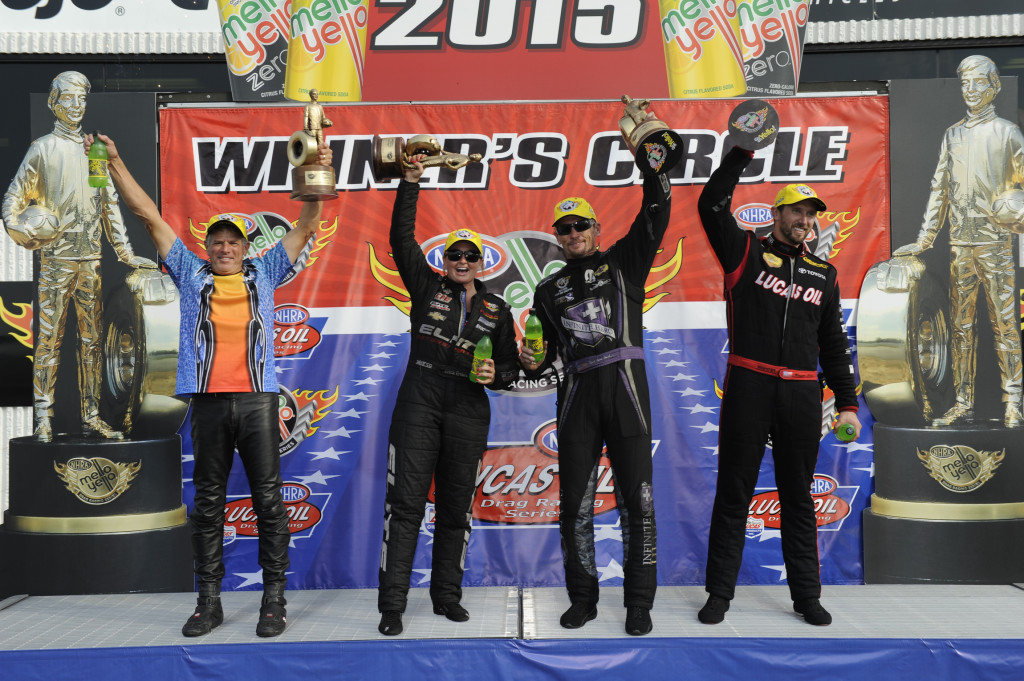 For the second straight year, all four winners were first-time champions of the U.S. Nationals. 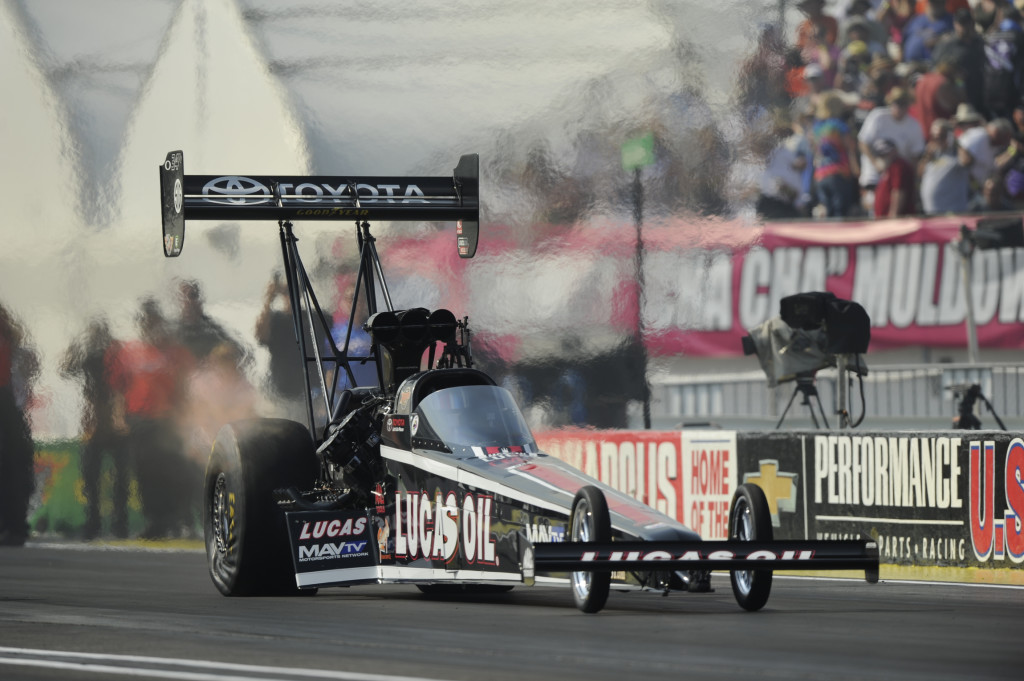 Morgan Lucas jumped for joy on the starting line a year ago as his rookie driver, Richie Crampton, won the U.S. Nationals.  This year it was his turn to win Indy for his Lucas Oil team.

“Winning this race is absolutely massive, the biggest race win I’ve probably ever had in my life,” said Lucas, who celebrating his 12th Top Fuel victory.  “Obviously I want to live in this moment for a long time to come because you don’t know — you never know — when the next one is going to be.  I’m so excited about my team, and to have my wife and my son here is just amazing, it really is.”

He opened the day by beating Leah Pritchett with the quickest time of the first round which put him against teammate Richie Crampton in round two, getting by him on a holeshot.  Crampton smoked the tires in the semi-finals, leaving Lucas to pedal his way to the finish and into his first Indy finals, defeating Brittany Force.

“Every time you win a race something special happens,” Lucas said.  “You have a memory from it that’s crazy and different.  This one, what was so crazy different was the fact that I feel like no matter when one of us screwed up — in a sense of something didn’t happen the way it should — the other side of the team was there to help each other out.”

Rounding out the weekend in Top Fuel, Antron Brown won the 2015 Traxxas Nitro Shootout for the first time in his Top Fuel career, running a 4.147-second pass at 220.62 mph to defeat Doug Kalitta. 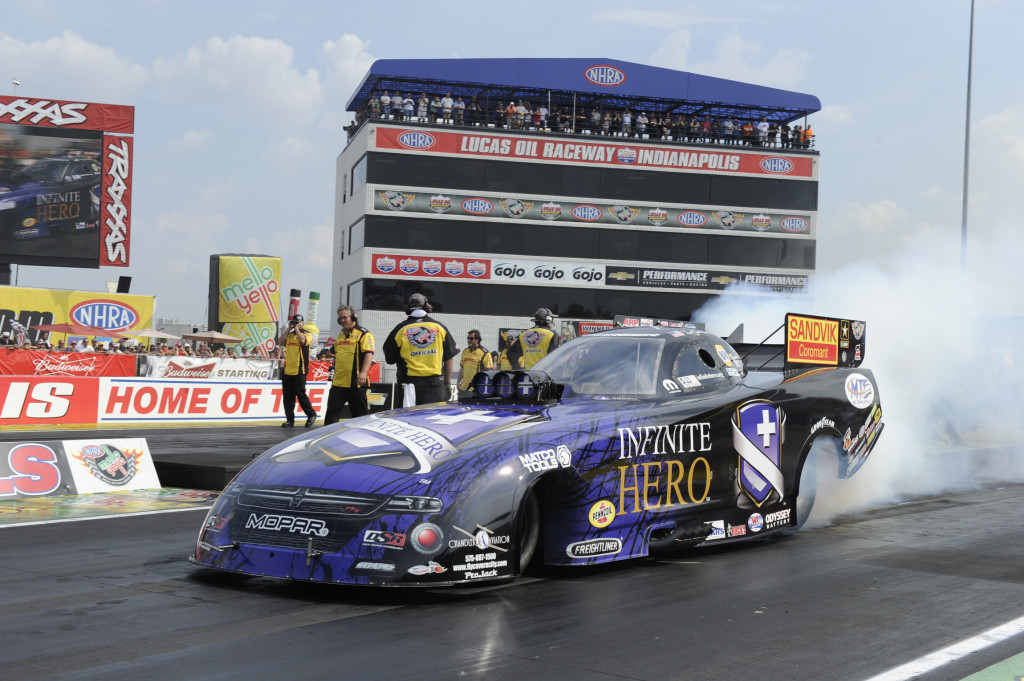 A year ago, Jack Beckman could never have imagined how bright his future would be after missing the 2014 NHRA Countdown to the Championship, but this Labor Day, Beckman drove his Infinite Hero Dodge Funny Car to an impressive victory.

The win not only put the Don Schumacher Racing team into the Countdown from the No. 1 position, but crew chief, Jimmy Prock and assistants John Medlen and Chris Cunningham also won Sunday’s Funny Car Traxxas Shootout, adding $100,000 to their bankroll.

The dynamic team also set track records for elapsed time at 3.936 seconds at a speed of 323.74 mph en route to winning its fifth pole of the year and four consecutive.

It is the sixth NHRA Wally trophy for the Infinite Hero team this year and the first U.S. Nationals title for Beckman, who has won 18 times in his pro career.

“I am so worn out.  I guess it’s about like getting to the top of Everest,” he said.  “You really don’t get to celebrate until you get back home and into a cozy area.  I don’t know when it will sink in.  It’s interesting when something really good or really bad happens, human nature is that the way we deal with it is you just suppress the extreme ranges of emotion, but I gotta tell you I’m pretty happy right now.”

And he certainly did that in Monday’s championship round against former world champion Robert Hight of John Force Racing.

Beckman was a key factor in beating Hight because it was one of the few times this summer that the Infinite Hero Dodge was not the quickest car.

Hight’s 4.045-second run was quicker than Beckman’s 4.058 but Beckman’s much better reaction time at the starting line (0.034) enabled his Funny Car to cross the finish line first.

The Beckman DSR team finished the regular season with a staggering 178-point margin over teammate Matt Hagan.  Beckman will lead Hagan by 30 points once they are reset for the six-race shootout that begins in two weeks near Charlotte. 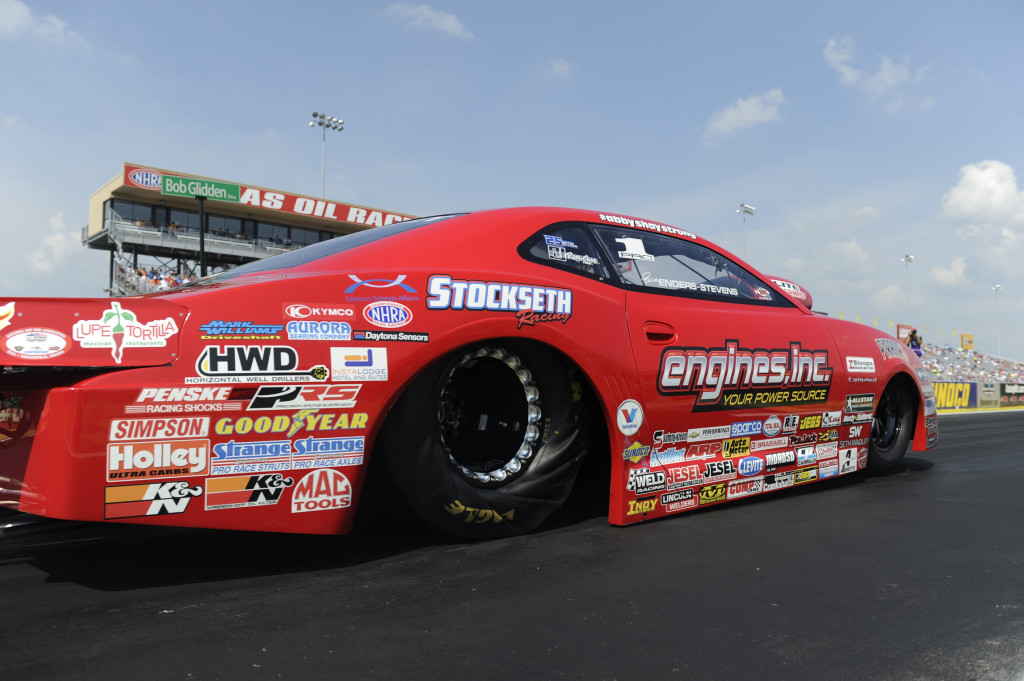 Erica Enders-Stevens can now add U.S. Nationals champion to her growing list of accomplishments in what is becoming a legendary career.

Enders-Stevens won the Chevrolet Performance U.S. Nationals at Lucas Oil Raceway with a brilliant driving display, beating her final three opponents on holeshots, including Elite Motorsports teammate Drew Skillman in the final round.

“I’m struggling putting it into words because we’ve worked so hard for so long to get here,” Enders-Stevens said.  “There have been times in my career, particularly the final at Indy in 2012, where I really didn’t understand why things went down the way they did.  It’s worth the wait.  It’s worth the wait to do it with the right people and I couldn’t be more proud of my team.”

The victory cemented her No. 1 spot in the Pro Stock points standings for the Countdown to the Championship, which begins at zMax Dragway in Charlotte in two weeks, and it was her 18th career win, tying her for second all-time with the legendary Shirley Muldowney.

“It was a challenge all day long, and our big round was against Greg Anderson,” Enders-Stevens said. “Beating him allows us to go into the Countdown in the No. 1 seed.  Those 30 points are going to be really, really crucial to us considering last year.  Had we lost to Jason Line in the final (in Pomona, Calif., last year); we would have lost by a single point, so it’s huge.  It’s huge for me; it’s huge for my team, and huge for any kid that ever had a dream.  I came here as a little kid and I wanted to be here.  Twenty-three years later we finally made it.”

“Six wins in a single season is huge because I tied Muldowney,” Enders-Stevens said.  “I talk about Shirley an awful lot because she’s been a lifelong hero of mine because of what she had to endure driving back then.  She still managed to do it with grace and class and come out on top.  Over the years she became my mentor and my friend.  I’m really lucky to have her in my corner.  To put my name next to hers for a tie for all-time wins is incredible.” 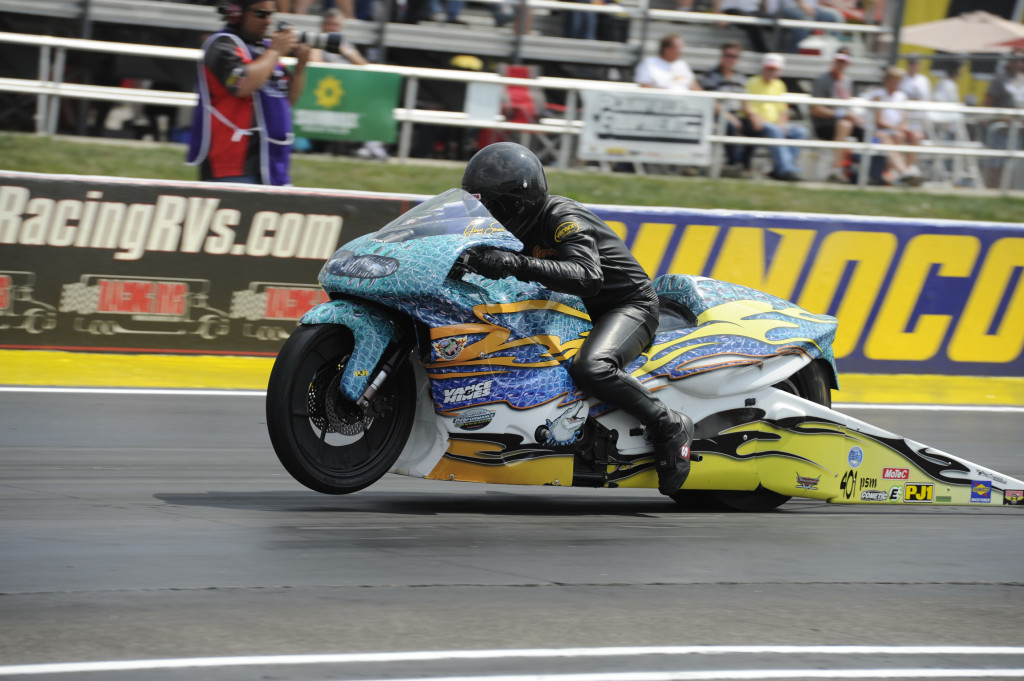 In Pro Stock Motorcycle, Jerry Savoie took home his second victory of the season with a time of 7.011 seconds at 193.02 mph on his Suzuki, beating No. 1 qualifier Chip Ellis who fouled out at the start on his Buell.  The win was Savoie’s third career victory and his first at Indianapolis.  He was the runner-up here in 2011 and 2014.  He defeated Chaz Kennedy, Steve Johnson and Hector Arana Jr. to advance to the final.

“It’s a great day,” said Savoie, who will enter the Countdown as the No. 4 seed.  “The last round was not the way we wanted to win but we held our composure.  We had a good day and we’ve been blessed.”

Ellis was the No. 1 qualifier and was looking for his first win of the season.  Despite the loss, Ellis was able to move around LE Tonglet and earn a Countdown spot.

The Mello Yello Countdown to the Championship, NHRA’s six-race playoffs, will begin in two weeks with the NHRA Carolina Nationals, Sept. 18-20, at zMAX Dragway in Charlotte, N.C.  The championship is open to the top 10 in each professional category following the U.S. Nationals and ends at the Auto Club NHRA Finals at Pomona, Ca.