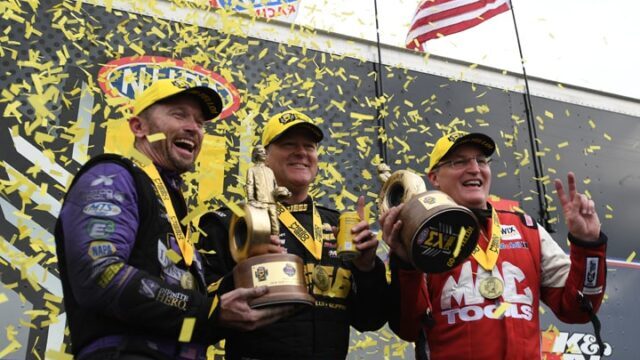 On the Thursday before NHRA’s season starting Mello Yello Lucas Oil Winternationals race on Auto Club Raceway at Pomona’s dragstrip, it would be fair to think Jack Beckman wouldn’t repeat his season-closing victory last November. Holding everyone around him at arm’s length, Beckman showed the effects of a massive cold, which can really get in the way of this tough, mental sport of drag racing.

Beckman, though, is a man of conviction and someone who doesn’t let anything stand in his way of achieving what the car offers him in a 1,000-foot catapult in a Funny Car drag race. The cancer survivor, a veteran who is known for his tenacity, Jack Beckman displayed those characteristics throughout the 60th annual Winternationals last weekend. 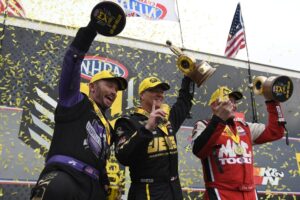 From Brainerd in 2018 to Reading in 2019, Beckman came so very close to taking a Wally winner’s trophy in the uber-competitive Funny Car class. Driving Doug Chandler’s Infinite Hero Foundation Dodge Charger SRT Hellcat from Don Schumacher Racing, Beckman’s always been a contender, but has a single 2012 championship to show for his stellar on-track activities.

The lag between victories was difficult for him and his Dean Antonelli/John Medlen-led crew. From August of 2018 until September of 2019, they chipped away at it. When Beckman won the Reading race – for once not plagued by major weather-related holds – he was ecstatic. That carried over to the season finale in Pomona last November, when the purple-and-black Flopper picked up its second victory of the year.

That victory left the Californian a mere eight points behind 2019 Funny Car champion Robert Hight of John Force Racing, yet exuberant in his race win. He was ready to do it again and, despite feeling horrible during the Winternationals race weekend, Beckman managed to qualify a close second to teammate Matt Hagan through the four attempts on Friday and Saturday, making 3.8-second runs each time he staged.

On Sunday he did it again, handily taking a tire-smoking Steven Densham and then out-running teammate Ron Capps, who had a spectacular explosion right after the 330-foot mark. Into the semifinals, Beckman had his way with returning competitor Alexis DeJoria, the duo having waited out a short weather delay. DeJoria’s Toyota Camry dropped a cylinder early and Beckman boomed to a 3.843/332.92 pass that saw him matched with 16-time champ John Force in the final round.

On a cooling track that kept threatening to interrupt the proceedings with moisture, Beckman overcame Force’s starting line advantage to give up his best lap of the day, 3.837/333.33 and take the Wally winner’s trophy. The margin of victory was about 22 feet and, just like that Jack Beckman felt like he was atop the world as he slid down the hood of his Dodge Charger SRT Hellcat. The victory was a “pinch me” moment, he declared. “It’s beyond magical. You don’t know if your last win is your last win. I’m going to go out on a limb and say that this ain’t our last win. Our car has been amazing,” he allowed. 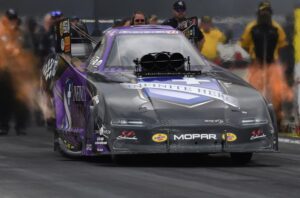 Certainly, his crew chiefs were able to work around Beckman’s physical issues and give him a tuneup that matched the conditions better than 151-race-winner Force’s team was able to do, even with a driver who is racing like a man half his age (Force is 70 years old). In earning his first Winternationals professional victory, against Force, Beckman was ebullient. “To beat John Force in the final makes it a pretty cool weekend. It’s my home track. I’ve probably spent more time down there on that starting line than anyone else. I’ve never won a nitro title here at Pomona until November of last year, and now I’ve got two in a row!”

Beckman amassed 126 points in Pomona and is in the lead heading into the second race of the year, outside Phoenix, earning nine qualifying points for his efforts over two days. He credited much of his victory to the test session he and his Infinite Hero Foundation team undertook in Las Vegas the week before. “We legitimately treated pre-season testing as testing. We changed some stuff in the cylinder heads, we ran our spare parts, we ran a whole lot of different disc packages in there and then we went back to the November tune-up for [the Winternationals]. We’ll phase all the new stuff in as the season progresses. [That work] shows.

“We were ‘top two’ every run in qualifying and, except for the first round, we were low E.T. or second low of every single session. Our car was just absolutely amazing. As a driver, you don’t want to limp your way into the winner’s circle; you want to dominate. It was awesome for us,” Beckman concluded.

Beckman gets to recuperate from his maladies for a week, but it’s doubtful he’ll live down the antics in top-end Winner’s Circle, where he shoved his Wally trophy into a crewman’s hands and it wended its way back to the pits, leaving the three celebrants, Beckman, Top Fuel champ Doug Kalitta and Pro Stock’s Jeg Coughlin Jr. – who all won at Pomona to conclude last year’s season and started the 2020 campaign in Winner’s Circle something that’s never occurred in NHRA history prior to now – with two trophies to raise as confetti rained around them.

Suffice to say they winged it until a Safety Safari member returned with the errant Wally trophy. Then, for the third time, confetti rained, everyone celebrated and the traditional ceremonies were held. Hey Jack – don’t leave your trophy in the truck next time! And he’s sure there will be a next time.