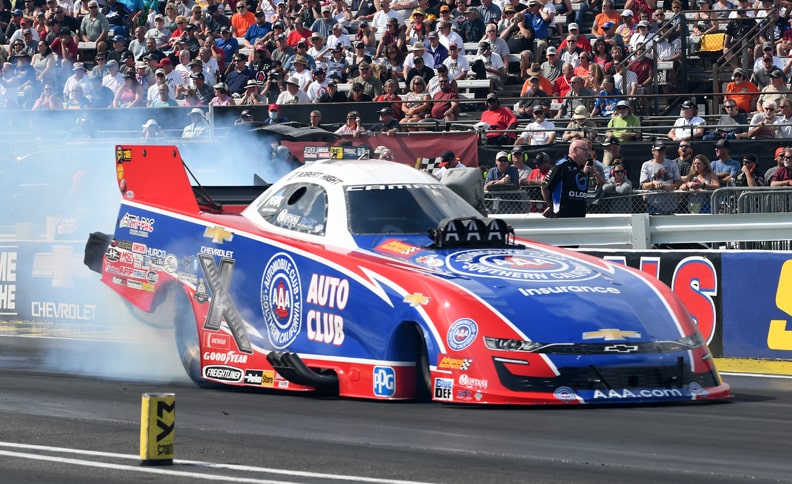 Jack Beckman and his Don Schumacher Racing (DSR) crew led by Dean Antonelli and John Medlen have had a bit more than a week to savor their most recent Funny Car win, which came more than a year after their previous visit to the NHRA Mello Yello Winner’s Circle. Their driver almost wishes the schedule continued this past weekend, but he’ll take that extra time off. “I was glad to get home, spend time with my family and celebrate the win with many of our friends.”

The driver of Doug Chandler’s Infinite Hero Foundation Dodge Charger SRT Hellcat flopper won the Countdown to the Championship starter at Reading nearly two weeks ago, elevating himself to the top of the standings with five more races that will determine a season-long champion. Beckman is a two-time winner at the World Wide Technology Raceway at this weekend’s Gateway race and has twice finished as runner-up.

He knows his lead is tenuous and he knows who’s chasing him relentlessly. That would be the 16-time NHRA Funny Car champion John Force, driver of the John Force Racing PEAK Chevrolet Camaro SS. Only 19 points behind Beckman, Force has been on a tear lately, driving with equal determination as he had when an unsuccessful youngster more than 30 years ago. 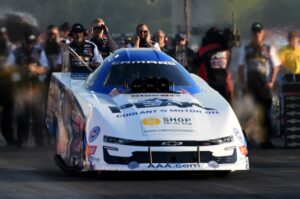 Force is hungry and that’s scary for Beckman and for his son-in-law and company president Robert Hight, who lies 24 points behind the leader. Still, with Beckman in the driver’s seat, “I think we made an absolute statement at Maple Grove: we are a championship-contending team,” Beckman reminded. “I’ve said that all year; it’s one thing to believe you have a shot at the championship, but it’s an entirely different thing to stand there with your team holding the trophy at the end of the day.”

Now that Force has, once again hit his stride, a 17th NHRA Funny Car championship doesn’t seem that much of a stretch. His Brian Corradi and Daniel Hood-tuned Camaro SS has been consistent throughout this long season, and it was on the money for all but the crucial , final run down the 1,000-foot dragstrip at Mohnton, Penn. “We had a good race day in Reading. Went to the final but Beckman, with the .028 light, I can’t beat that on my best day,” Force conceded.

Force makes his 781st career race day start at this weekend’s AAA Insurance Midwest Nationals, owning two wins in four final rounds, along with eight semifinal results and three No. 1 qualifiers. “Well, we’re all headed to St. Louis and I’m ready to get there. We’re all in the Countdown. Robert and I are back to back in the points. Brittany is No. 2 and the Prock kid is seventh. The championship is coming fast and it would be nice to win another one,” Force said. 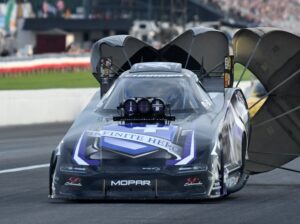 Hight won this race last year and already has five wins to his credit, all coming during the 18-race “regular” season. Hight owns three straight No. 1 qualifiers on the Gateway track; his victory in last year’s AAA Insurance NHRA Midwest Nationals came against Wilkerson, an anomaly who owns, tunes and drives his Funny Car. Hight did it as an explosion ripped his winning car to pieces. “We didn’t get to celebrate,” Hight recalls. “I had to go to the hospital so there was no winner’s circle. We’re going to change that this year; we’ll be defending our win and looking to get a proper winner’s circle, the whole team together.”

Hight also runs the risk of the “Courtney” factor. Like his sister-in-law, Hight had a truly memorable regular season in Funny Car, but his first Countdown race was less than satisfactory when he smoked the tires in the second round and failed to complete the competition. That’s what felled Courtney Force in 2018; Hight is hoping he can avoid those difficulties, that his Jimmy Prock and Chris Cunningham-led team can find the magic that brought them the 2017 Funny Car title again this year.

It’ll be hot in the reflection of St. Louis’ arch but rain threats for this weekend have subsided. That will allow the 18 entered Funny Car contingent to run and run hard as they vie for this single-race Winner’s Circle, even as the 10 Countdown competitors stake their chances for a season-long championship.