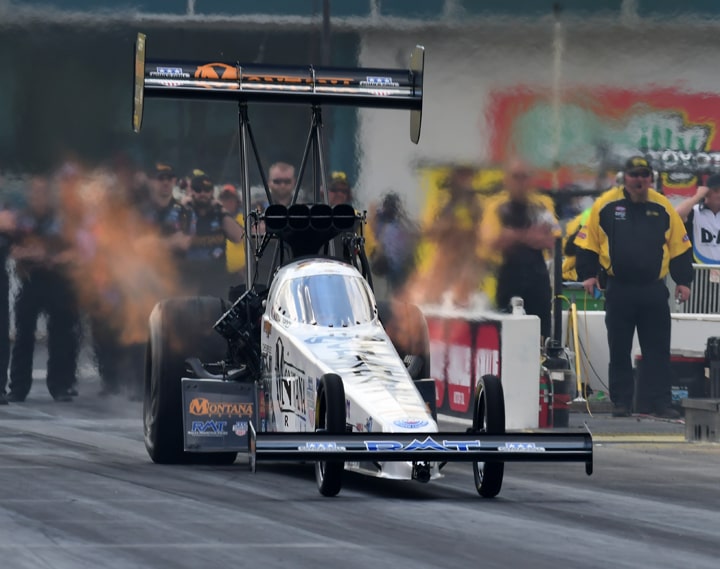 Austin Prock has had an auspicious opening to his NHRA Mello Yello Top Fuel career. Announced as the second dragster driver for John Force Racing (JFR) the week of the season opening Lucas Oil Winternationals on the Auto Club Raceway at Pomona, the third generation racer was impressive from the moment he first left the water box, winning a round in his first race.

That was impressive, of course, but not terribly unexpected for a driver whose father is one of the most respected tuners in the business. Jimmy Prock is currently making crew chief adjustments for Funny Car points leader Robert Hight at JFR. Prock’s grandfather, Tom Prock, was a heck of a racer in his day and, after retiring from the driver’s seat, helped advance piston development at Venolia before recently retiring from business to the Indianapolis area.

Austin Prock has advanced from the first round in three of his first five races, falling to Clay Millican in Gainesville and coming in fourth at the first four-wide contest of the season at Las Vegas. In Pomona, Phoenix and Houston Prock, now 23, found his way to the quarterfinals. That’s impressive for a rookie in this sport, even one with a good deal of racing experience. He was making a name for himself in open wheel, circle-track competition (with 27 wins) before switching to straight-line competition.

Now, Prock is ready to improve, in particular at this weekend at zMAX Dragway near Charlotte, N.C., where he’ll contest his second Four-Wide competition. Getting off the line with three other racers was a big ask for the rookie. 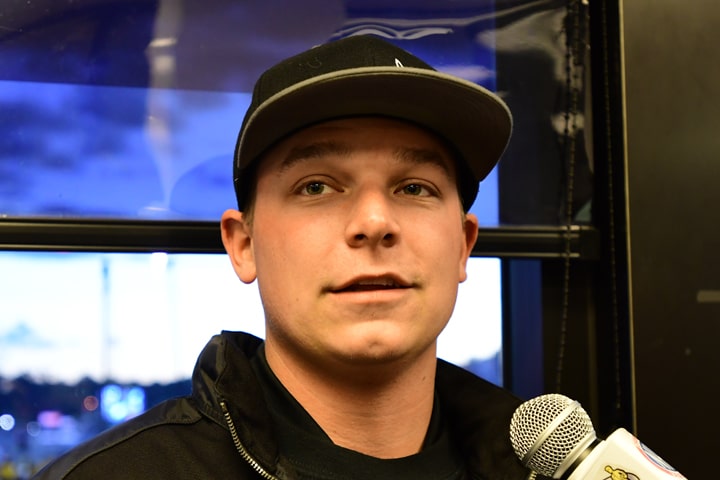 “It’s a little different than I expected, but we caught on and we’re pretty confident heading into this weekend,” he said. At Las Vegas Prock struggled, but recognized the errors he was making in the cockpit.

Currently 11th in the standings, Prock does like “the fact that you can beat three guys at once and you can even beat three guys on a hole shot,” when racing four-wide. “For a driver, that gets me pumped to try and leave on three people. That’s a cool part of the race, but this is just something that’s different. It’s exciting to switch things up every once in a while and I’m really looking forward to it.”

Consistency is a virtue in NHRA drag racing and, at Houston two weeks ago, Prock had consistent qualifying passes in the 3.70-range that earned him seventh starting spot.

“My reaction times were killer on Sunday,” Prock noted. He beat fellow rookie Jordan Vandergriff (for the second time) before falling to reigning Top Fuel champion Steve Torrence. His team, led by crew chiefs Ronnie Thompson and Jon Schaffer, came together just as quickly as the sponsorship deal with Montana Brand / Rocky Mountain Twist, put together with the help of legendary racer Don “Snake” Prudhomme.

“Working with this team, it really just makes the learning process way shorter for me,” Prock allowed. “All three of my teammates are world champions,” he said of Brittany Force, Hight and 16-time Funny Car champion John Force. “They’ve been there, done that. If I have any questions, I can go to them right off the bat. My ears are always open and that definitely helps. Working with my dad, he’s one of the greatest ever and he’s worked with a lot of talented drivers, so anything he tells me, I’m going to make sure and listen.”

Although Austin Prock has yet to make a pass down the zMAX Dragway strip, acknowledged as “The Bellagio of dragstrips,” his fellow JFR teammates have accumulated a resume of eight wins at both the spring and fall events.

“Our Montana Brand /Rocky Mountain Top Fuel dragster is hot right now. We turned things around at the last race in Houston and this next race is going to be a big one. It’ll be the first time I get to race in front of my brother, Thomas, and my whole family will be there. I want to win this deal. I’ve got one four-wide event under my belt and feel confident I’ll do my job on the starting line, and I know my team will back me with one bad hot rod.” 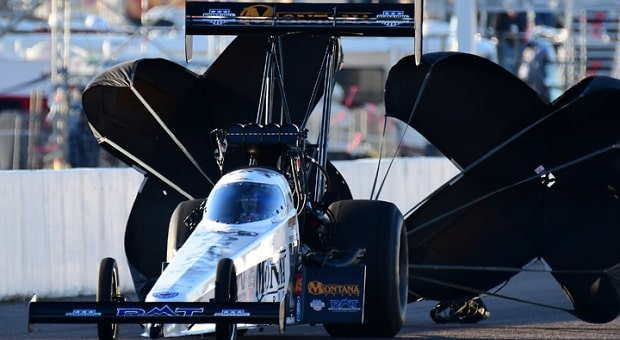