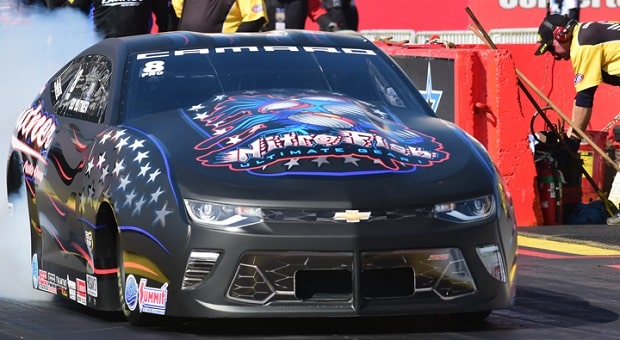 Consistency in racing is usually a sign of success. Keeping “the band together” means the right kind of interaction between driver – or rider – and crew that brings results. This week we’ve seen the opposite in NHRA Mello Yello drag racing: crew chief swaps are happening one-third into the 24-race season as teams in Top Fuel, Funny Car, Pro Stock, Pro Stock Motorcycle and Pro Mod head to Richmond for the Virginia NHRA Nationals on the Virginia Motorsports Park dragstrip.

This will be the 25th edition of the Richmond race, and the second since NHRA returned to the track last year as a replacement for Old Bridge Township Raceway Park’s demise in Englishtown, NJ. The first event saw Steve Torrence, Courtney Force, Tanner Gray, LE Tonglet and Mike Janis take home the hardware during the early June Richmond race; only Torrence and Janis have the opportunity to repeat in 2019, with Force stepping away from driving, Gray checking out circle track racing and Tonglet working with his fire department and learning to be a good father.

Although he had a slow start to the season, Steve Torrence and his “Capco boys” have found their strides, making it difficult for everyone else in Top Fuel to catch him – again. They’ll all try – that’s what racing is about, but Torrence does a really good job of psyching his opponents. Since Atlanta two weeks ago, there’s a change on the crew chief front, with Jon Schaffer moving to Tasca Racing and Mike Green going to John Force Racing (JFR), an even swap that gives rookie Austin Prock a new co-crew chief, working with Ronnie Thompson. 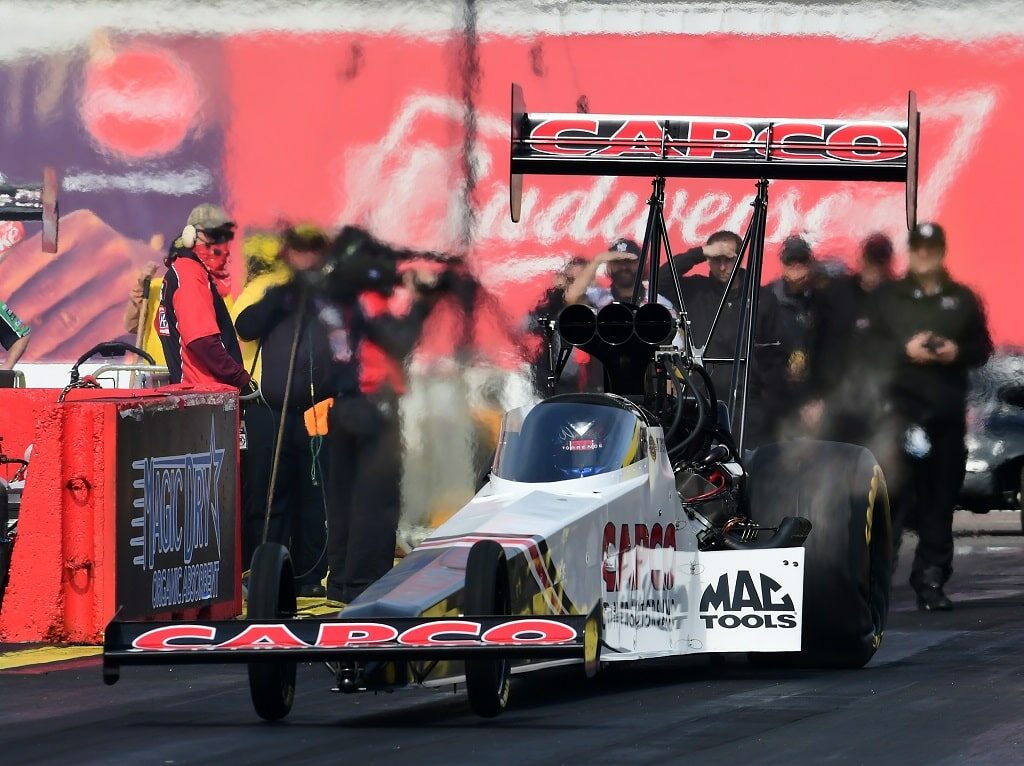 There are 18 entries in Top Fuel for this weekend, which means two unfortunate drivers won’t be in the field for Sunday eliminations. Billy Torrence, Todd Paton, Audrey Worm and Lex Joon will be attempting to make the field along with the regular cast of characters, where the Top 10 are separated by 291 points. Torrence has assumed the lead, followed by JFR’s Brittany Force, early leader Doug Kalitta, Don Schumacher Racing’s Leah Pritchett, Clay Millican, Mike Salinas, Antron Brown, Richie Crampton, Terry McMillen and Austin Prock.

In Funny Car, if the NHRA-published entry list holds true, there will be 16 floppers on the grounds, allowing everyone to race on Sunday. Veteran Tim Wilkerson, currently in sixth place after a sizzling early season, is debuting his new 2019 Ford Mustang body this weekend as a companion piece to Tasca’s Mustang, which was first run at Pomona in February. Wilkerson has a special wrap for the new car as the 20-time Funny Car winner celebrates sponsor Levi, Ray & Shoup’s 40th year in business.

With their new 18-race schedule for the 2019 NHRA season, Pro Stock has been MIA since the DENSO Spark Plugs NHRA Four-Wide Nationals in Las Vegas the first weekend of April. it’ll be good to have them back, even if 2017 champion Bo Butner attempts to earn his fourth victory in five races this weekend. Butner, who leads the standings by 238 points over 10th place Chris McGaha said the seven-week layoff is “kind of like we’re starting a new season again,” he said. “I assume a lot of people have tested and worked hard and our guys have, too, so hopefully we’ll start off right where we left off.” 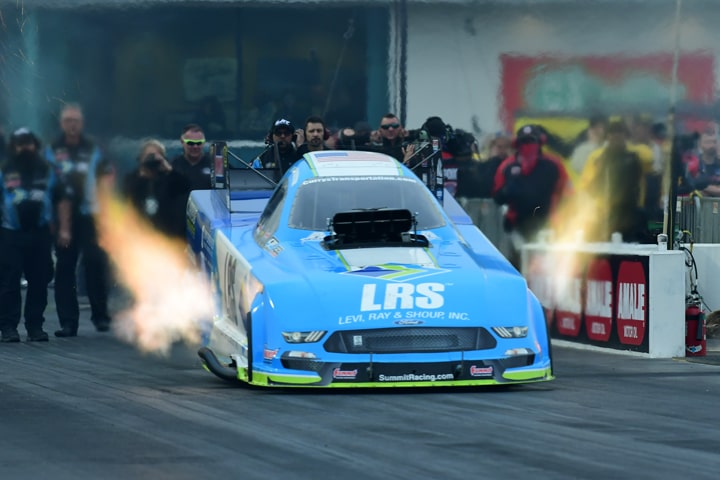 Butner’s KB Racing-prepped Camaro is one of 15 similar entries as only one Dodge Dart and a single Ford Mustang have been entered for this race. Mexican racer Fernando Cuadra is bringing son Fernando Jr. to this competition in the sole Ford while Alan Prusiensky continues to run the only Dart in the field. Alex Laughlin is second in points, Matt Hartford third, followed by Jason Line, Erica Enders, Jeg Coughlin Jr., Rodger Brogdon, Greg Anderson and Deric Kramer. With 17 entries posted for this event, someone won’t race on Sunday – but who will it be?

It’s a relatively short field for Pro Stock Motorcycle, which customarily has in excess of 20 entries. Sixteen motorcycles have been entered for the Virginia NHRA Nationals so everyone gets to race in Sunday eliminations. That’s good news for Jianna Salinas, who has been testing rather than racing as she hones her craft on an Underdahl Suzuki. If the entry list doesn’t inflate, she’ll be in the field come Sunday.

While Hines and Krawiec have been leading the Harley bunch in this class, third rider Angelle Sampey continues to learn about her new mount and hasn’t yet shown the confidence that landed her in seventh place last year. The same could be said for Scotty Pollacheck, who’s seemed to be on the verge of his first PSM victory for a few years now. He went to a Suzuki last year and is now back on a Matt Smith EBR. Stoffer has shown speed while riding Tonglet’s 2018 Suzuki but hasn’t been able to convert that speed to victory – will this be the race for this group of riders to come out of hiding?

For once, it looks like weather won’t be much of a factor for the racers, with hot and possibly muggy conditions forecast for the weekend. There are some racers that love to see a dragstrip that’s hot and these conditions could favor those folks. With temps in the high 80s to low 90s and only a 20% chance of Saturday showers, this should be a very competitive race. 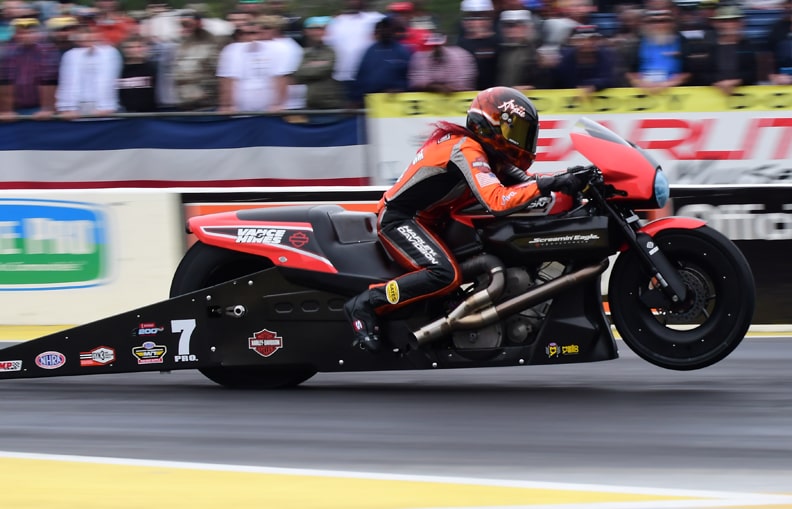 About Anne Proffit 553 Articles
Anne Proffit traces her love of racing - in particular drag racing - to her childhood days in Philadelphia, where Atco Dragway, Englishtown and Maple Grove Raceway were destinations just made for her. As a diversion, she was the first editor of IMSA’s Arrow newsletter, and now writes about and photographs sports cars, Indy cars, Formula 1, MotoGP, NASCAR, Formula Drift, Red Bull Global Rallycross - in addition to her first love of NHRA drag racing. A specialty is a particular admiration for the people that build and tune drag racing engines.