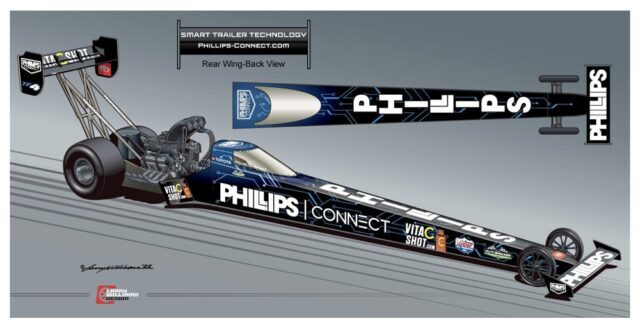 Justin Ashley, who finished fourth in his second season of NHRA Camping World Drag Racing Series Top Fuel competition – and was the 2020 Rookie of the Year – is not only a proficient racer on the track. He’s darn good at getting companies to back his play, which is helpful when you’re running a class like Top Fuel, one that requires huge amounts of capital to be successful on the track.

Ashley, a second-generation nitro racer, has secured primary sponsorship with Phillips Connect, a national leader in semi-trailer tracking and sensor technology. At the moment, this sponsorship includes the first three contests of the year: the Lucas Oil Winternationals, the NHRA Arizona Nationals and the NHRA Gatornationals. The firm intends to utilize comprehensive corporate hospitality and business-to-business initiatives to benefit the funding applied to Ashley’s racing efforts.

“I believe this is only the beginning of what will be an incredibly valuable win-win relationship,” Ashley said as he announced the partnership. “I am honored to represent Phillips Connect and anxious to be a part of their team. I want to win on the track and, equally important, I want to win for them in the business-to-business sector. I believe our team, NHRA, the fans and, for that matter, the entire sport of drag racing is a high-speed golf course, where some of the greatest business deals get done. I can’t wait for the season to get started.”

With their programs at these three initial NHRA contests in a 22-race campaign, Phillips Connect intends to demonstrate its wide variety of smart-trailer technology products. These can improve and streamline its customers’ businesses, providing instant data analysis and insight in the most critical conditions, thereby improving up-time, operational efficiencies and driver safety over the road. Phillips Connect’s products go well beyond GPS to provide tracking capabilities for trailers, chassis and containers.

The company offers a wide variety of sensors, including DoorCheck™, TempCheck™ and CargoCheck™. It also has a variety of health-monitoring sensors like TPMSCheck™, ATIS RegulatorCheck™, BrakeCheck™, Light-OutCheck™, Wheel-EndCheck™, Remote PreCheck™, CargoVision™, SmartLockDoor™, SmartLock Gladhand™ among others. These sensors seamless integrate with the Connect1 user interface, giving fleet managers sufficient info to turn their assets faster and maximize driver productivity.

There is a drag racing connection for Phillips Connect, as their executive vice president is former racer Jim Epler. “It’s been 28 years since I was the first professional driver to break the 300 mph barrier in a Funny Car, and 20 years since I retired from the sport as an NHRA driver,” Epler said, “and I can’t explain how exciting it is to return as a primary sponsor. From my early days as an owner and driver, I have been focused on the business-to-business side of marketing a race team. NHRA has the best platform to conduct relationship selling and Justin Ashley, and Davis Motorsports, are the perfect fit for Phillips Connect. Justin has proven to be an incredible driver and spokesperson. We are honored to be partnered with him. I can’t wait to kick this off on my 30-year anniversary of my first Funny Car win,” Epler concluded.

For almost 100 years, Phillips Industries has moved the transportation industry forward. Its products are standard equipment on nearly 100 percent of all semi-trucks that are manufactured in North America, and 70 percent of all trailers. Phillips Connect, along with its parent company, understand the unique challenges that transportation and logistics customers face every day. Its thrust is to build products that are easy to install, intuitive to use, and scalable for the transportation industry’s future.

“I’m excited about this new partnership with Justin Ashley Racing. There are obvious synergies between our businesses,” noted Rob Phillips, CEO of Phillips Connect. “The high performance and efficient operation required by Justin’s team matches the dedication of everyone at Phillips Connect to deliver to our truck fleet customers a total telematics solution that will give them fast ‘pit-stop’ installations, and the most cost-effective and reliable system available anywhere. Justin has put together a winning team and we are happy to have him represent Phillips Connect.”

The new livery for Justin Ashley’s Top Fuel dragster will be officially unveiled on February 18th on the Auto Club Raceway at Pomona drag strip and the rail will be called the Phillips Connect Toyota Top Fuel dragster powered by Vita C Shot. After three qualifying sessions – one on Friday and two on Saturday – the first eliminations of the year take place January 20th and will be televised nationally on FS1.

About Anne Proffit 864 Articles
Anne Proffit traces her love of racing - in particular drag racing - to her childhood days in Philadelphia, where Atco Dragway, Englishtown and Maple Grove Raceway were destinations just made for her. As a diversion, she was the first editor of IMSA’s Arrow newsletter, and now writes about and photographs sports cars, Indy cars, Formula 1, MotoGP, NASCAR, Formula Drift, Red Bull Global Rallycross - in addition to her first love of NHRA drag racing. A specialty is a particular admiration for the people that build and tune drag racing engines.