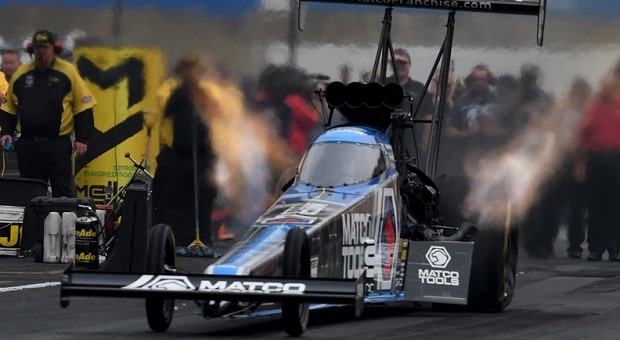 After this 2019 NHRA Mello Yello season is complete, I’m hoping Don Schumacher will make moves to improve the lot of his three-time Top Fuel champion Antron Brown, driver of the Matco Tools dragster. Brown, 43, the former Pro Stock Motorcycle standout, came to Don Schumacher Racing (DSR) as a dragster driver on his way up the food chain.

After earning 16 national event titles on a Pro Stock Motorcycle (his final PSM years as teammate to Angelle Sampey at DSR), Brown went to David Powers Motorsports to earn his stripes as a Top Fuel racer, with Lee Beard coordinating the effort. He was a sensation on debut, earning a No. 1 qualifying spot at the 2008 Winternationals and winning in just his fourth start in Houston. With Powers exiting the sport, Brown worked with three different teams in his sophomore dragster season, ending it with DSR as then-team-owner Mike Ashley sold his enterprise to Schumacher.

That change brought Brown back to DSR in 2010 and introduced him to current co-crew chief Mark Oswald, the 1984 NHRA Funny Car champion. Oswald, together with Brian Corradi, tuned Brown to three championships (in 2012, 2015 and 2016) and enabled his 50 Top Fuel victories in NHRA Mello Yello competition.

Much changed after the 2017 season, when Corradi left to tune Courtney Force’s Funny Car at John Force Racing. Oswald remained and DSR promoted Brad Mason to co-crew chief the Matco Tools rail. The results haven’t been as great for Brown, who could end this year without a single Wally winner’s trophy for the first time in a dozen years. He’s had a single win since 2017 and has made way too many first-round exits in a highly-competitive but frequently short-fielded category.

Through it all though, Brown has retained his love for life and the sport of NHRA Top Fuel drag racing, along with his incredible will to succeed. His conditioning befits a former high school and college track star and he enthralled many in the stands at Bandimere Speedway outside Denver this very hot July with an effortless leap into the crowd above the track’s start-line, post-race. 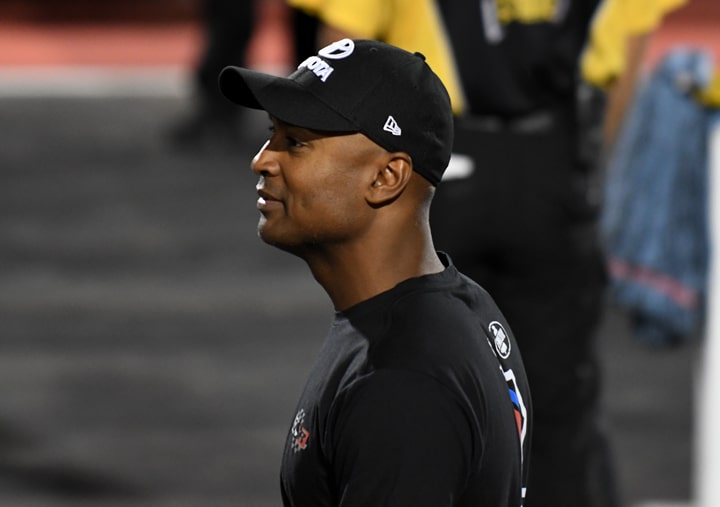 Still, the numerous breakages suffered by a three-time championship team and the poor luck that’s followed this squad the past two years have to be eating at both the driver and his team owner. It can’t go on like this much longer, despite the loyalty of Matco and other team and personal sponsors. It’s not enough to talk about the past, about the 2009 Western Swing sweep (nobody’s done it since Brown) and those three championships – what have you done for me lately?

This year, Brown entered the six-race Countdown to the Championship in third place, despite a lack of victory. His results in the five races held to date are a quarterfinal stoppage at Reading against eventual winner Richie Crampton, a first-round loss to teammate Leah Pritchett at St Louis, another first-round result in Charlotte when he lost to Doug Kalitta, a second quarterfinal result against Brittany Force at Dallas and a sad, tire-smoking defeat by Terry McMillen in the first round in Las Vegas, previously one of Brown’s stronger venues. As he enters the Auto Club NHRA Finals this weekend, Brown is eighth in the Countdown standings.

Brown hasn’t forgotten how to drive a 11,000-horsepower rocket, nor have Oswald and Mason lost their ability to tune one of these ultra-sensitive cars. But something is missing here and we don’t yet know what it is. Here’s hoping team owner Don Schumacher makes some changes going into the 2020 campaign that brings the effervescent yet determined Brown back to his winning ways.