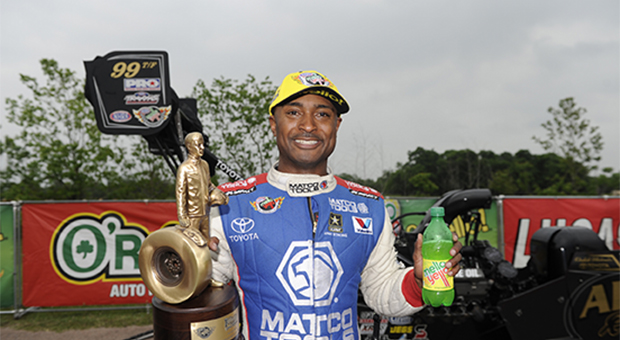 2012 Top Fuel champion Antron Brown was having a great 2014 NHRA Mello Yello Drag Racing season building up to the Countdown; he won five times in the first 18 races and entered the championship chase in the No. 2 position with only  Doug Kalitta in front of him.

It seemed like all he needed for his second championship was stay the course.  He already had wins in Phoenix, Houston, Charlotte’s 4-Wide, Chicago, and Norwalk, but just as the Countdown was about to crank up, his Don Schumacher Racing/Matco Tools dragster suddenly hit a performance slump.

At Indy’s U.S. Nationals, he barely made the field, pitting him against teammate and eventual 2014 champ, Tony Schumacher.  Then on a treacherous track at Charlotte, his outcome was over early against another DSR teammate, Spencer Massey. When that event was moved to Dallas after a rain postponement, his team was still trying to find its center.  Brown qualified 13th in Dallas and lost to Al-Anabi’s Shawn Langdon.

“We just didn’t hit it right,” said a determined Brown.  “In the Countdown, as with any other form in racing, you definitely have to have the little things, like luck, go your way.  We went into it hard and thought we had a good shot at it.  The first race of the Countdown [Charlotte] didn’t go the way we planned and it kind of set us back a little bit…we had a double race in Dallas and that definitely played to the favor of Tony [Schumacher], my teammate.  He had his car on cue.  His car ran so well at Charlotte and he brought that momentum with him to Dallas and they pulled off two wins in one race weekend.  That’s what really gave them the edge in the way they raced in the Countdown.  The first two events they just capitalize on it and they did an outstanding job at it.” 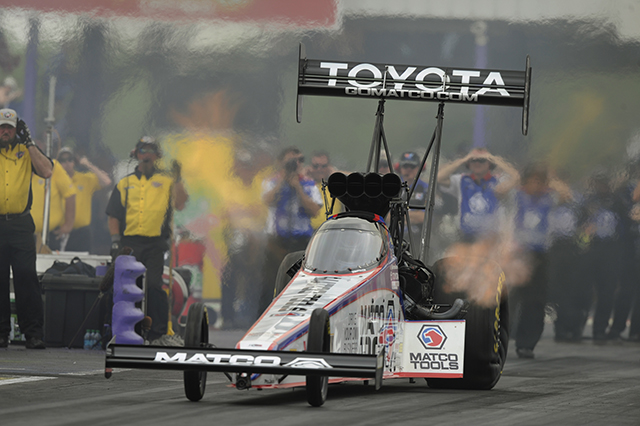 Getting their on-track act back in concert, the DSR Top Fuel team led by Brian Corradi and Mark Oswald gathered it together, rebounding in St. Louis, winning the event and cutting Schumacher’s lead to 80 points.  He jumped from eighth to fourth in the Countdown standings just that quickly after the first three of six Countdown races.

“We got ourselves back into contention for the championship in St. Louis and then headed to Reading and qualified decent, but we lost first round.  We just tried to give it too much.  When you lose first round, it puts you right back in the same situation,” explains Brown.  “We ran Vegas and we didn’t run the way we would have liked and stayed out and tested.  We had nothing to lose.  We went to our six-disc clutch setup that we were planning on running next year and our car bounced right back to where it used to be.  We knew that going into Pomona, but we still wanted to take a chance going with a new setup that we didn’t have that many laps on.  We had some laps throughout the year on it in qualifying and we were comfortable with it.  When you think about it, it’s hard to switch from something that got you so many round wins in the beginning and the middle of the year.  We stuck to our guns too long.  That’s pretty much what I would say that happened to us this year in the Countdown.”

The team rallied for Pomona’s NHRA Finals, qualifying No. 2 with a superb near national record run of 3.720 seconds, but at that point the championship was gone.  The determined DSR/Matco team never quit, though, and improving their position still remained paramount. 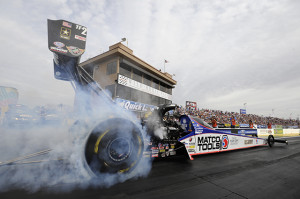 Those incredible elapsed times were created with excellent weather, offering sporadic sunshine – just enough to put some heat in the track with low humidity.  The NHRA Safety Safari prepped the track with grip and the crew chiefs pounced on it, giving the fans a real show in NHRA’s finale of 2014.

“So going into the semi-finals, our main focus was to do the same thing we just did.  We were racing and not trying to go out there to set a world record.  If we could have made it to the finals, we would have nothing to lose.”

Brown ended up seventh in the Mello Yello standings, 189 points behind Schumacher.

With the 2014 season in Brown’s rear view, he feels fortunate to be surrounded by two long-time crew chiefs in Brian Corradi and former racer, Mark Oswald.  This inventive duo have more tricks in their arsenal and own the NHRA National Top Fuel ET record of 3.701 seconds set in 2012 in Reading. 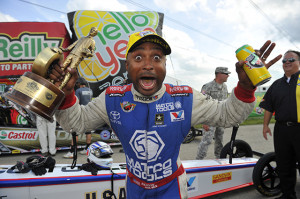 “Mark is just instrumental to what we do,” the Brownsburg racer said.  “He brings the calm while Brian Corradi stirs it up.  He’s a crew chief and Mark is a crew chief, but Mark is like Brian’s alter-ego.  Mark is very scientific, he breaks things down.  He’s a really good engine guy and is just methodical in what he does.  Brian and Mark are very good working with each other.  There are no egos involved and they are always on the cusp of inventing things.  That’s what I love about them. They are constantly thinking and making things better.  They help me be a better driver.  I think that’s the key element of why we work so well together.  We all do this together.  If we should stumble at a racetrack with some sort of gremlin in the car; they are one of the quickest ones to ever figure what it is and get the car back on track.  They are able to figure it out.  That’s what makes it so cool.  It’s that way in the good times and in the bad times.  It’s what keeps everything going and right for our team.”

Testing starts next year at the January 16-17 Pro Winter Warm-Up at Palm Beach International Raceway and it will be time to start all over.  Brown is entering into his seventh Top Fuel season full of energy.

“I think we’re going to go out there and work hard to implement all of our new stuff, for example, like the clutch program that we’re running now,” Brown said.  “We’re hoping it’s going to get hot down there, but it’s never hot.  We know how to run fast with the current combination.  We want to practice on a track where it’s really hot.  That’s where we really need to work on our combination for 2015.”

The 2015 NHRA Mello Yello season kicks off in February at the Auto Club Raceway at Pomona on February 5 – 8.

All photos are Courtesy of NHRA Media