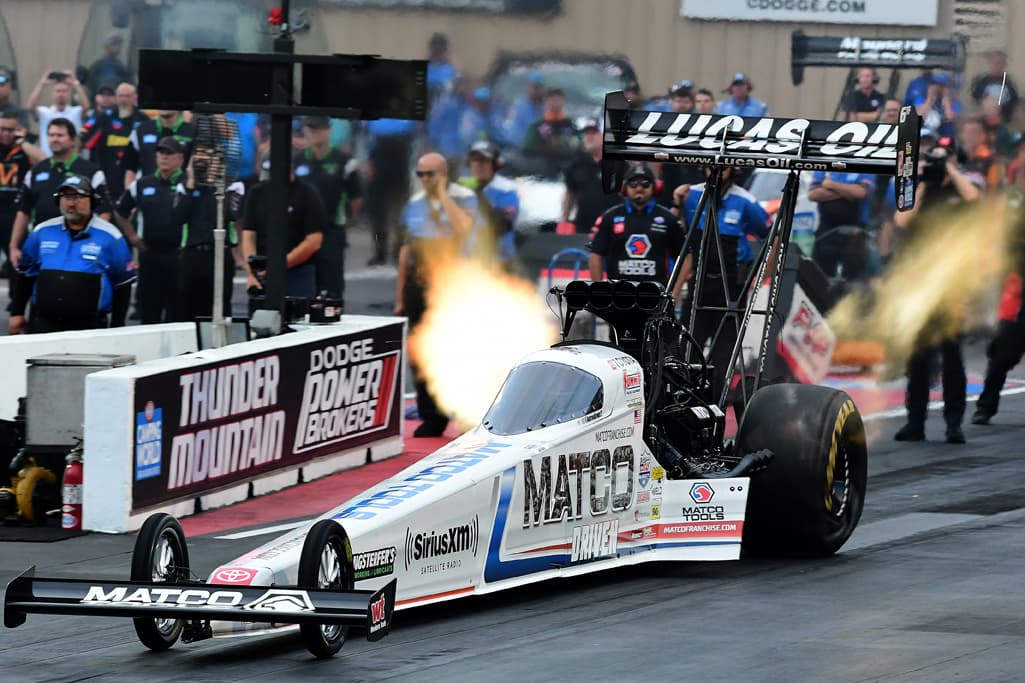 Three-time Top Fuel champ Antron Brown proves that, despite a rocky season, he still has what it takes at the NHRA Heartland Nationals.

Ron Capps started his own team this year and the two-time, reigning champ has already picked up two Funny Car victories in the regular season, which has two more races before the Countdown to the Championship begins. Capps is also the first driver to take the new Toyota GR Supra to the Winner’s Circle in its first year of competition. This after being jettisoned by Dodge after being a Charger SRT Hellcat driver for much of his stellar career.

For these two squads, 2022 has been an excellent season so far. But everyone has been hoping the team announced first in the dispersal of Don Schumacher Racing’s large nitromethane-fueled squads would come to life. It had been such a long time since Antron Brown won a race in Top Fuel, and it’s been tough to talk about it, walk around it and generally consider the fact that the three-time champ wasn’t able to get the job done.

His first-round results throughout the year have been painful for the Brian Corradi and Mark Oswald-led team, the squad that helped Brown to his three titles with DSR. But over the past few races, during the Western Swing, Brown finally appeared to be on the road to redemption. He started going rounds. He started smiling at everyone again. Even CorradI looked happier. 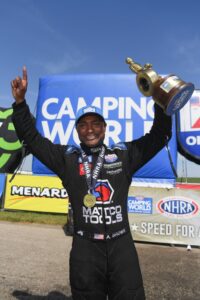 And finally, on a third miserably-hot day in the heartland, at Heartland Motorsports Park, Antron Brown got his groove back during the 33rd Menards NHRA Nationals. He didn’t have lane choice in the finals after a less-than-satisfying semifinal bout against Justin Ashley. He was facing good friend and four-time reigning champion Steve Torrence in the finals, another driver hungry for victory after not making it to the Winner’s Circle since last year’s Finals at Pomona. That’s 14 races and counting for Torrence, who again failed to find the win lights first.

Brown had the traction and the preferred right lane that Bob Tasca III had just used – after a lane swap with GOAT John Force, the 16-time champ and 2021 victor at this track. The AB Motorsports brain trust had the correct lane for their tuneup and they did just about everything correctly as their driver took his 11,000 horsepower dragster from the Christmas Tree lights to the finish beams, 1,000 feet away. Brown led from the tree with a .062 reaction time, just .002 better than Torrence. Brown was quicker than Torrence the rest of the way down the track and put together a 3.902-sec lap at 309.49, a 0.5433 margin over the Texan, whose tire shake doomed him to a losing run.

Brown knew people were skittish about talking to him, even as he racked up his 53rd Top Fuel win and 69th overall NHRA win. “People weren’t even talking about us anymore. We weren’t even in the conversation… you could see it on some people’s expressions when the media was writing us off, but those on the outside didn’t know what was going on behind the ropes and what goes on at the shop,” Brown said of his struggles, with only three advancements from Round 1 in 13 races.

“This,” he said of team ownership, “has been a lifelong dream. I never imagined we were going to struggle like we did, but we all got through it together,” the always-positive driver/owner/operator said. Things began to change in Sonoma, he related. “Once we got past the first round today and through the second round, and third round, and went up against Steve-O in the final, and that win light came on, it was just like ‘boom, is this real? Yup, it’s real.’ All the sweat and hard work; it was all worth it.”

With this victory, Brown leapfrogged two drivers who couldn’t get past the first round of eliminations in Kansas, Austin Prock and Clay Millican. Both he and Tony Schumacher, who won at Seattle to break his own losing streak, are now in the Countdown, albeit needing to stay strong for the next two Brainerd and Indy rounds, where positions in the playoffs are settled, once and for all. Right now Schumacher is ninth and Brown holds tenth-place points. The duo have see-sawed in and out of that magic area all year.

In Top Fuel, the points race remains pretty tight, with Brittany Force leading Mike Salinas, Justin Ashley, Torrence, Josh Hart, Leah Pruett, Shawn Langdon, Doug Kalitta, Schumacher and Brown. There’s a massive separation between first and tenth, with Force holding 1122 points and Brown clutching 613. Both he and eight-time champ Schumacher will have to use their wiles to both stay in the running and, perhaps, move up the ladder.

Brown’s companions on the dais of the Winner’s Circle at Heartland Motorsports Park were Ford Mustang stalwart Bob Tasca III, who defeated 16-time Funny Car champ John Force’s Chevrolet Camaro SS in a straight-up battle, Troy Coughlin Jr. in Pro Stock with his Elite Motorsports-prepped Jeg’s Chevrolet Camaro and Joey Gladstone in Pro Stock Motorcycle on his Reed Motorsports Suzuki Hayabusa, both of whom earned second consecutive victories in their classes, the first two victories of their professional careers.